Like many other folks in the U.S., I haven’t been exactly cheerful over the past few days. Music including this 1971 classic can be great to overcome the post-election blues. 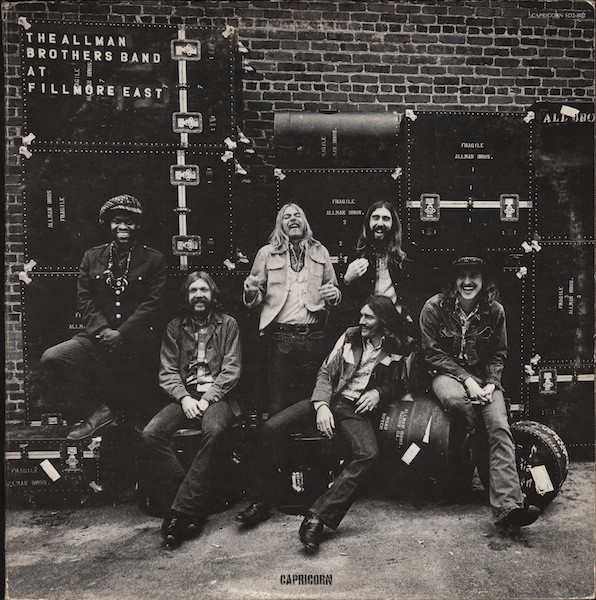 I certainly don’t want to trivialize the outcome of the U.S. presidential election, which does concern me a great deal. Turning to the blues in this situation may also seem to be ironical. But I find there is something in this great music that puts me at ease, providing a welcome distraction from all the post-election media coverage and analysis.

At Fillmore East is the third album by The Allman Brothers Band. I agree with critics who consider it to be one of the best live albums in rock music. It captures material from three concerts the band performed at Fillmore East, a legendary late 60s/early 70s music venue in New York City, which also featured other icons like Jimi Hendrix, The Kinks and Led Zeppelin.

Even though the Allman Brothers had already released two excellent studio albums, their eponymous debut (1969) and the follow-up Idlewild South (1970), it was At Fillmore East that gave them their commercial breakthrough. It’s really not a surprise, since the band was such an amazing live act.

At Fillmore East showcases the Allman Brothers’ outstanding musical craftsmanship. It features long jams mixing blues and rock with country and jazz elements. Of the seven songs on the original release only two are Allman Brothers compositions: Dickey Betts’ In Memory of Elizabeth Reed from Idlewild South, and Gregg Allman’s Whipping Post. Both are among the album’s highlights blending amazing dual lead guitar parts by Duane Allman and Dickey Betts with the treffic sound of Gregg Allman’s Hammond.

Statesboro Blues nicely showcases Duane’s slide guitar work. Another standout is Stormy Monday. The tune starts off as a slow blues, picks up to a jazz grove driven by Gregg’s organ and then slows down again to a blues tune. It’s just brilliant!

Released July 1971, At Fillmore East reached No. 13 on the Billboard 200 and received RIAA Gold certification in October that year. Eventually, it was certified platinum in August 1992. The album is No. 49 on Rolling Stones’ 500 Greatest Albums of All Time and was one of the 50 recordings the Library of Congress selected in 2004 to be added to the National Recording Registry.

4 thoughts on “What I’ve been listening to: The Allman Brothers At Fillmore East”