A Facebook ad about this Beatles tribute band delivered what it had promised with a great show last night at the historic Count Basie Theatre in Red Bank, N.J.

Last year, an ad on Facebook announced RAIN: A Tribute to The Beatles was going to play the historic Count Basie Theatre in Red Bank, N.J. As a true Beatlemaniac, I looked them up on YouTube right away. Over the years, I’ve encountered various bands covering The Beatles – some pretty good, others not so much – so I wasn’t quite sure what to expect. In this case, I was immediately intrigued and got tickets for last night’s show.

To put it right upfront, RAIN delivered what the YouTube clips had promised and then some. These guys are truly amazing and probably come pretty darn close to the real thing. Not only are the vocals almost indistinguishable from the original songs, but the band also does an amazing job looking and acting like The Fab Four during different times of their career.

RAIN was founded in Laguna Beach, Calif. as Reign in 1975, initially playing both original songs and Beatles covers. The band took its name from the 1966 song Rain, written by John and credited to Lennon-McCartney. The tune was released as the B-side to the single Paperback Writer. In 2010, RAIN took their act to Broadway, performing 300 shows there between October 2010 and July 2011.

Last night’s lineup included Landes, Paul Curatello, McNeil, Chiazza and Beyer. RAIN worked their way through The Beatles’ music catalogue in rough chronological order. The show was divided in five sections: The early years mostly included singles The Beatles released between 1963 and 1965, such as Please Please Me, I Want to Hold Your Hand, She Loves You, A Hard Day’s Night, If I Fell and Yesterday. The section also featured a reenactment of the Fab Four’s first visit to the U.S. and appearance on the Ed Sullivan Show. 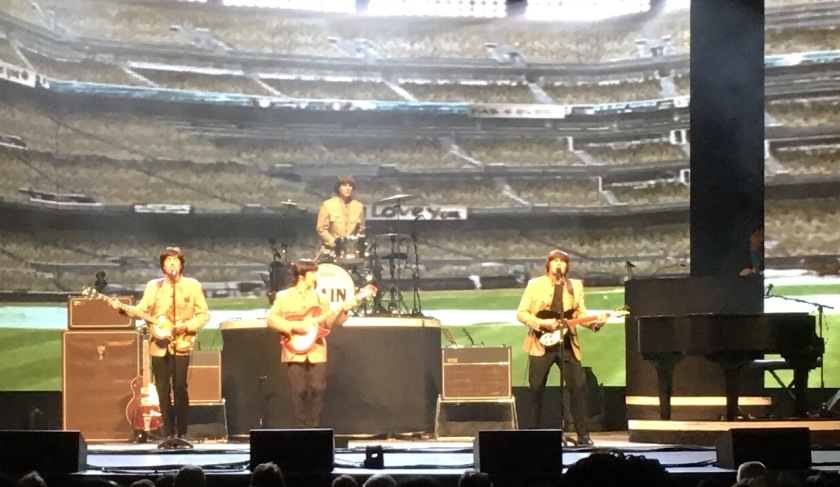 Part 2 covered The Beatles’ legendary open-air concert in front of more than 55,000 screaming fans at Shea Stadium in August 1965. This section featured Ticket to Ride, The Night Before, I Feel Fine, Day Tripper and Twist and Shout. The next part captured the end of the band’s live touring and mostly included songs from Rubber Soul and Revolver, such as Drive My Car, In My Life, Eleanor Rigby and Got to Get You Into My Life. The section ended slightly out of chronological order with two tunes from the White Album: Ob-La-Di, Ob-La-Da and While My Guitar Gently Weeps featuring a superb rendition of Eric Clapton’s guitar solo – a highlight of the show.

Following a short intermission came the evening’s biggest thrill – in honor of the 50th anniversary of Sgt. Pepper’s Lonely Hearts Club Band, RAIN played the entire album in chronological order, from the title song to A Day In the Life. It was truly amazing!

The last part of the official set featured a selection of post-Sgt. Pepper tunes, including Here Comes the Sun, Lennon’s solo single Give Peace a Chance, Get Back, Revolution and The End. The band did not play any tunes from Magical Mystery Tour and Yellow Submarine, but given they performed all of Sgt. Pepper and the show lasted for more than two hours, one cannot complain. When not surprisingly at the end of the official program the audience was cheering for more, RAIN played Hey Jude as an encore.

Here’s a nice clip of more than one hour of footage from a concert RAIN performed in Mexico in April 2013.