From rock to roots music to blues to hard rock and shock rock, it’s all in the mix for the next few months 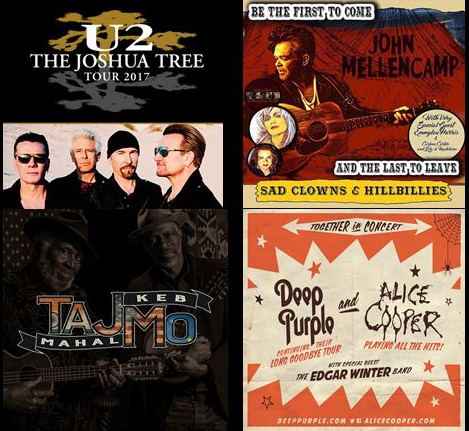 To readers of the blog and folks who know me it shouldn’t come as a big surprise that I love going to concerts. I can barely wait until the end of June when my summer concert season kicks off. Following is a preview of shows I’m currently planning to see.

Even though I’ve listened to U2 since the early ’80s, I’ve never seen them live. They have been on my bucket list for a long time. And what better occasion to catch them than during their 2017 tour to celebrate the 30th anniversary of The Joshua Tree, their fifth studio album and probably my favorite U2 record. The tour, which includes North America and Europe, kicked off on May 12 in Vancouver, Canada and will conclude in Brussels, Belgium on August 1. “My show” will be the second night at MetLife and the 20th date.

Rolling Stone, which covered the U.S. tour opener in Seattle on May 14, called the show “epic.” The set kicked off with Sunday Bloody Sunday and featured 16 tracks, including all songs from The Joshua Tree, played in the same order than on the album. U2 also played two encores with seven additional songs. For the final Joshua Tree tune, Mothers of the Disappeared, Pearl Jam’s Eddie Vedder joined U2, together with Mumford & Sons who had opened the show. Here’s a clip of Where the Streets Have No Name.

This will be my second time to see John Mellencamp, one of my favorite music artists. Similar to U2, I’ve listened to him since the early ’80s. I like both the early, more rock-oriented Mellencamp with songs like Hurts So Good, Pink Houses and R.O.C.K. In the U.S.A., as well as his roots-oriented, more stripped down approach he has increasingly adopted over the past 20 years. I think his current album Sad Clowns & Hillbillies with Carlene Carter is an absolute gem. I previously reviewed it here.

The summer tour, which features Carlene Carter and Emmylou Harris, includes 22 shows. It is set to kick off on Monday, June 5 in Denver, Colo. and will finish in Forest Hills, N.Y. on July 11. The concert at the Mann in Philly will be the 18th date. As reported by Variety, the upcoming tour will include outdoor gigs, the first time in 15 years Mellencamp has played such venues.  Here’s a clip of Indigo Sunset, one of the best songs from the new album. I think Carter’s beautiful country voice and Mellencamp’s raspy singing make for a great mix.

I’m particularly excited about this show, which will be the first time I see any of these legendary blues artists. Taj Mahal’s and Keb’ Mo’s recently released collaboration album TajMo, which I previously reviewed here, has become one of my most frequently played records. The joy these two guys had when recording the album is obvious and something I find very engaging.

Things got underway in Fort Collins, Colo. on May 30. The concert in Wilkes-Barre will be the 11th of 39 shows of the tour, which will conclude in Ft. Lauderdale, Fla on October 28. Here’s a clip of All Around the World.

While there are several hard rock bands I like, if I would have to choose only one, it would be Deep Purple. And if I would need to select only one of their albums, undoubtedly, it would be Machine Head, which to me is the definitive ’70s hard rock album. It was also one of my first vinyl records I bought in the late ’70s – I still own it!

While I’ve enjoyed listening to Deep Purple for more than 30 years, this will be the first time I’m going to see them live, as will be the case with Alice Cooper. But unlike Deep Purple, I don’t know Mr. Shock Rock’s music, except for the epic School’s Out and No More Mr. Nice Guy. According to Ultimate Classic Rock, the co-lining tour includes 19 gigs in North America, starting in Las Vegas on August 12 and concluding on September 10 in Cincinnati. PNC Bank Arts Center will be 11th show. The tour is part of Deep Purple’s Long Goodbye Tour – sounds like it’s about time to see them!

Of course, I realize Machine Head was released 45 years ago. It’s still hard for me to picture Deep Purple without Ritchie Blackmore and especially Jon Lord, and Ian Gillan’s voice has probably seen better days. But Steve Morse and Don Airey are top-notch musicians, and the band’s new album inFinite, which I reviewed here, shows Deep Purple still has some gas in the tank. Here’s a clip of Highway Star from a recent concert in Munich, Germany.

3 thoughts on “It’s That Time of the Year Again: Summer Concert Season”