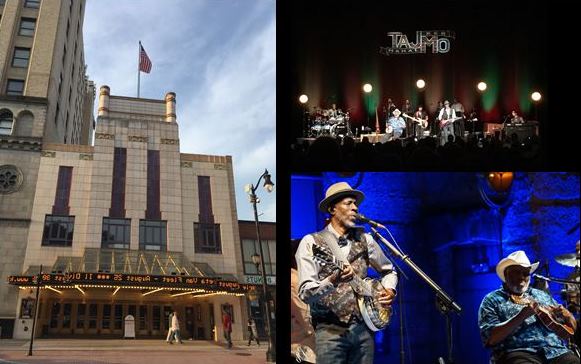 A long three months finally came to an end last night. Shortly after Taj Mahal and Keb’ Mo’ had issued their collaboration album TajMo in May, I found out about their All Around the World tour and got a ticket to what I knew I simply wouldn’t want to miss. It was a great decision!

Yesterday night, the two blues dynamos brought their show to the F.M. Kirby Center of the Performing Arts in Wilkes-Barre, Pa. The heart of the Wyoming Valley is not exactly New York or Chicago, but was well worth the 2.5-hour hike from my house through the Pocono Mountains!

Readers of the blog have probably noticed the blues has been on my mind frequently as of late. Undoubtedly, the excellent TajMo album, which I previously reviewed here, has something to do with it. In addition, I’ve been excited about other recent new releases in the blues and soul genres from artists like Kenny Wayne Shepherd, Casey James and Southern Avenue. Maybe Taj Mahal and Keb’ Mo’ are right when they expressed full confidence that the blues will survive during a recent PBS NewsHour segment.

Before I get to TajMo, I’d like to say few words about the opening act, a country blues artist called Jontavious Willis. According to his online bio, Mahal called Willis “my Wonderboy, the Wunderkind.” After having seen last night’s 30-minute performance by the 21-year-old from Greenville, Ga., I have to say this is not an exaggeration and yet another indication that the prospects of the blues look bright these days!

Willis, who is currently finishing his studies at Columbus State University, released his debut album Blue Metamorphosis in February this year. He’ll continue to tour with TajMo for many of their upcoming gigs in August and September. What this young artist got out of just an acoustic guitar was insane. It’s hard to find clips that do his exceptional solo acoustic skills full justice.

After Willis blew off the Kirby Center’s roof with his dynamic acoustic guitar performance, it was time for TajMo. From the very first moment they walked on stage, their joy of performing together was palpable. The set opened with Señor Blues, a jazz standard by Horace Silver, which Mahal covered on his 1999 studio album with the same title. This was followed by Don’t Leave Me Here, the first of five songs Mahal and Mo’ played from TajMo, and one of favorites from that album.

After six tunes with the full band, the two blues maestros took things “to the deep country blues,” as Mahal put it, playing Diving Duck Blues. Written by Sleepy John Estes, Mahal first recorded the track on his 1969 eponymous debut album. It is also included on TajMo and another highlight of that record. Watch the amazing chemistry between the two.

One of the highlights during the second half of the set was The Worst Is Yet to Come. Co-written by Mo’, Heather Donovan and Pete Sallis, Mo included the tune on 2014’s BLUESAmericana, his 12th studio album. I wonder whether Mo’ got the inspiration for the song’s title from the American songbook 1959 standard The Best Is Yet to Come, which became one of Frank Sinatra’s popular tunes in the mid-’60s. Unfortunately, the only TajMo clip I could find is cut off in the beginning.

Ironically, The Worst Is Yet to Come was followed by one of my longtime favorite blues tunes: She Caught the Katy And Left Me a Mule to Ride. Prior to that I only had known the great version by The Blues Brothers. It turns out Mahal co-wrote this classic with Yank Rachell and included it on this second studio album The Natch’s Blues, which was released in 1968.

The last song I’d like to highlight is All Around the World, which also appears on TajMo and was the closer of the 20-song regular set. The tune perfectly sums up the positive vibes Mahal and Mo’ sent to the audience throughout the show. People were up on their feet and made some noise, so they came back for one encore: Soul, yet another tune from their collaboration album.

Finally, I’d like to say a few words about the top-notch band that backed up Mahal and Mo’. Unfortunately, I couldn’t find the names of the musicians, but here are a few things I remember. The drummer comes from Memphis, Tenn., former home of the storied Stax Records label. The bassist, who is a lefty, hails from Washington, D.C. The fantastic horn section consists of a male trumpet player and female saxophonist. Mo’ called her out for her amazing sound. The keyboarder, who among others played a seductively roaring Hammond, was top-rate as well. Last but not least, there were two special background vocalists: Mahal’s daughters, Deva and Zoe. And they were not there just for alibi – these ladies can sing!

TajMo are taking their tour next to Wheeling, W.Va.; and Richmond, Va. before hitting New York City’s SummerStage in Central Park this Sunday, where they will perform a free show. I’m tempted to go there to see them again! The tour continues throughout the remainder of August and September all the way into October, when it concludes in Fort Lauderdale, Fla. on October 21.