The man with the bandana and his Disciples of Soul play historic theater in Staten Island, N.Y. 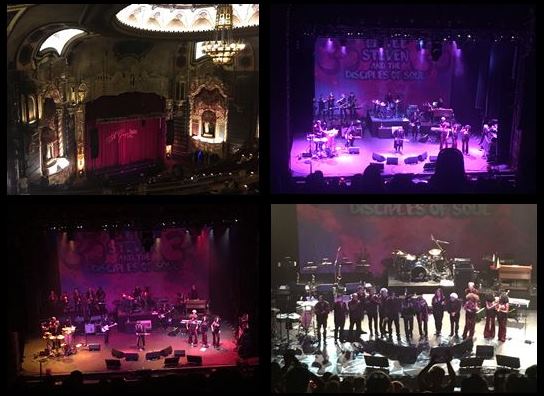 Steven Van Zandt had not been on my radar screen as a solo artist until recently. Things changed in May when he released Soulfire, his first solo album since 1999. It quickly became one of my favorite new records this year, which I previously reviewed here. When I found out he was kicking off a tour at the Count Basie Theatre in Red Bank, N.J., that show in late May – his only scheduled U.S. gig at the time – was already sold out! So I was glad that after a European leg, he brought the tour back to the U.S. Last Thursday, I was able to see his great show at the St. George Theatre in Staten Island, N.Y.

Unlike the Count Basie Theatre, the venue wasn’t sold out; in fact, I would say only half of the seats were taken, which was unfortunate. But it didn’t seem to have an impact. Little Steven and his top-notch band The Disciples of Soul delivered a powerful performance that lasted for close to two and a half hours. And while the audience wasn’t the biggest, people certainly were engaged.

The show kicked off with the soul classic Sweet Soul Music. Written by Arthur Conley and Otis Redding, the tune was first released by Conley in 1967. This was followed right away by Soulfire, the title track from Van Zandt’s above mentioned latest album. In a Rolling Stone interview ahead of the record’s release, Van Zandt noted he co-wrote the song with a member of Danish rock and soul band The Breakers, which first released it on their eponymous album in June 2011. Here’s a clip of Soulfire captured in Leipzig, Germany back in June.

Tunes from almost the entire Soulfire album were sprinkled throughout the show, and I have to say those were the tracks I generally liked the most. One of the highlights of the record that was also a standout of the show was Blues Is My Business, a great cover of an Etta James tune included on her 2003 album Let’s Roll. Here’s a cool clip.

Another great song from Soulfire and highlight of the set was Down And Out In New York City. Written by Bobbie Chandler and Barry De Vorzon, the track was first recorded by James Brown for the soundtrack album of the 1973 blaxploitation crime drama Black Cesar. The performance showcased the band’s terrific five-piece horn section, with each musician playing solo back-to-back. Here’s a nice clip of the tune recorded at another gig earlier this month.

In addition to Soulfire, Little Steven also played songs from his earlier solo records with The Disciples of Soul, especially their debut Men Without Women (1982) and Voice Of America (1984). Among these tunes was Angel Eyes, written by Van Zandt and included on the 1982 record.

And then there was of course Van Zandt’s previous work with Southside Johnny and the Asbury Jukes. He was a co-founding member and produced various of their records. The set included three tunes from that band: I’m Coming Back and I Don’t Want To Go Home, two Van Zandt tunes that also appear on the Soulfire album, and Love On The Wrong Side Of Town, which he co-wrote with Bruce Springsteen. Here is a clip of I Don’t Want To Go Home, the title track of Southside Johnny’s 1976’s studio debut. It was part of the encore.

According to the tour schedule posted on Little Steven’s web site, the band will continue touring the U.S. throughout October. In early November, they are scheduled to return to Europe for another six weeks, with shows in England, Scotland, Sweden, Norway, Denmark, Germany, Netherlands, Italy and Spain.