The above clip of Back In Black is from a show AC/DC performed on December 4, 2009 at River Plate Stadium in Buenos Aires, Argentina during their Black Ice World Tour. Yesterday, Malcolm Young, the band’s original rhythm guitarist who played a key role in writing the riff to this and many other AC/DC classics, passed away at the age of 64. He had fought an extended battle with dementia, which had forced his official retirement from the band in September 2014. 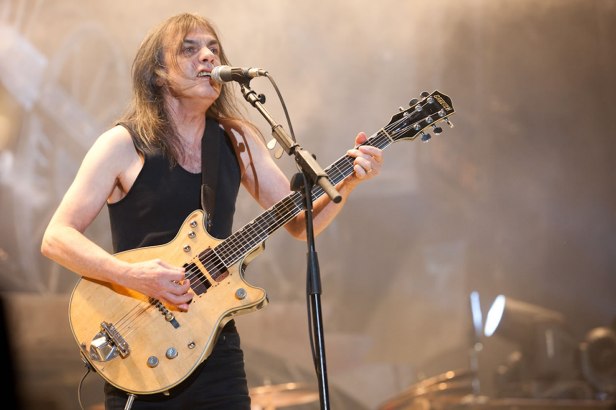 Malcolm co-founded AC/DC together with his younger brother Angus Young in November 1973. While he always gladly left the limelight to Angus and singer Bon Scott and later Brian Johnson, Malcolm had a major influence on AC/DC’s songwriting and sound. He is co-credited on pretty much all of their tunes together with Angus, Scott and later Johnson. An official statement on the AC/DC website highlights his “enormous dedication and commitment,” calling him “the driving force behind the band.”

Back In Black was the title track to AC/DC’s seventh studio album, which appeared in July 1980. Not only did the record bring unprecedented success to the band, but with an estimated 50 million copies sold worldwide, it became the second-highest selling album in music history behind Michael Jackson’s Thriller.