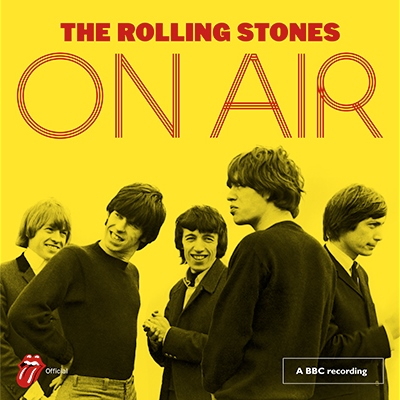 Last Friday (Dec 1), The Rolling Stones released On Air, a collection of recordings made by BBC Radio between 1963 and 1965 – a great piece of early Stones performance history and a true gem for fans. According to Wikipedia, The Sunday Times first mentioned the existence of the BBC tapes in early January 1998. Why it took almost 20 years to release a compilation of these recordings isn’t clear to me. Some reviews regarded the record as a sequel to Blue & Lonesome, the band’s first all-blues cover album from last year. Given the unexpected success of that record, which topped the charts in 15 countries, perhaps there is something to it. On Air certainly makes for a great Christmas present, especially for Stones fans.

The collection is available in a standard 18-track and a deluxe 32-track version. The above picture shows the cover of the deluxe. All of the recordings were captured live in-studio, a BBC Radio requirement for any band that wanted air time on their shows in the 60s – no lip-synching allowed! Some of the performances happened in front of live audiences. The shows during which these performances aired included Saturday Club, Yeah Yeah, Blues In Rhythm, The Joe Loss Pop Show and Top Gear. Saturday Club, which was on the air from 1957 until 1969, was one of the earliest pop music radio programs in England. 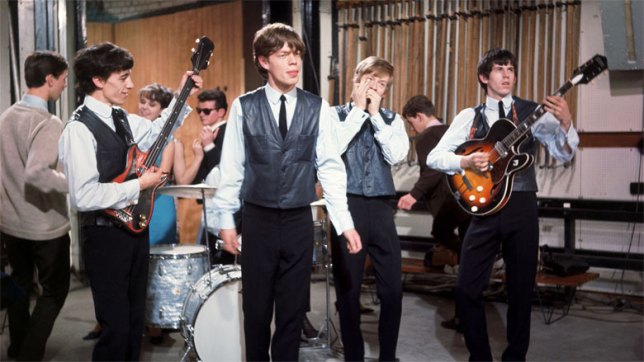 On Air features blues and rock & roll covers of tunes from the likes of Chuck Berry, Bobby Troup and Willie Dixon, as well some early Stones originals, such as Satisfaction, The Spider And The Fly and The Last Time. What’s especially intriguing is that the collection includes eight songs the Stones had never recorded or released commercially before. Unfortunately, these tunes are nowhere revealed, so I suppose fans have to figure them out by themselves – not an easy task, given the Stones mostly played covers in their early years.

Only very few reviews I’ve seen pointed out the mystery around the eight songs. Instead, some reviewers were upset about the fact that the tracks are not presented chronologically. While the order in fact does appear to be arbitrary, that aspect doesn’t bother me much. For folks who don’t want to listen to say Satisfaction prior to Route 66, Little By Little or Walking The Dog, they can simply queue up the songs accordingly. Figuring out the eight previously unreleased tracks is more tricky!

In addition to the great music, what’s truly remarkable to me is the crisp sound of some of the tracks. That is due to audio source separation. According to a press release, the process “involved de-mixing the transcripts and allowing engineers at Abbey Road access to the original instrumentation and voices within each track, so that they could be rebuilt, re-balanced and remixed to achieve a fuller, more substantial sound.”

Time for some music clips! First up: Satisfaction. Obviously one of the original tunes penned by Mick Jagger and Keith Richards, the song was first released as a single in the U.S. in June 1965 and was also included on the American version of the Stones’ fourth studio album Out Of Our Heads, which appeared in September that year. The BBC version was recorded just a few days prior to the appearance of that record. I just love how this recording sounds even more guitar-focused than the original studio version, especially the roar of Richards’ signature guitar riff!

Roll Over Beethoven, one of the above noted eight tracks, is a highlight of the collection and I think my favorite on the album. It is one of various Chuck Berry covers. Berry, a huge influence on the Stones, originally released the tune in May 1956. It was also included on Chuck Berry Is On Top, one of the most amazing classic rock & roll records ever released. The BBC recording is from October 1963. I’ve always liked The Beatles’ version of the song. This one kicks it up a notch, in my opinion, and I say this as a huge Beatles fan. Similar to Satisfaction, the sound of the recording is just amazing!

Another great track on the collection is Route 66, the Bobby Troup rhythm & blues classic from 1946. The BBC recording is from 1964 and is one of the songs the Stones apparently performed in front of a live audience, though one can only hear screaming folks in the beginning and at the end.

Fannie Mae, another cover, was recorded in 1965. One can clearly hear that the Stones had become a more mature band by that time. The tune features great blues harp playing by Brian Jones. Fannie Mae was written by American blues and R&B singer Buster Brown and originally recorded in 1959.

Confessin’ The Blues, which was recorded for The Joe Loss Pop Show in 1964, is another performance in front of a live audience. Similar to Fannie Mae, it features Brian Jones doing another amazing job on blues harp. Written by Jay McShann and Walter Earl Brown, the Stones first recorded the tune for their second American studio album 12 X 5, which was released in October 1964.

The last track I’d like to highlight is Ain’t That Loving You Baby, which according to one review I read is also among the above eight mystery songs. The tune was written by Don Robey and first recorded by Bobby Bland in 1962.

While doing some research for this post, I came across a great story in the Los Angeles Times. It includes an interview with Richards discussing his recollection of the Stones’ experiences at the BBC Radio recordings. Since I found his comments fascinating, following are some excerpts.

“At the time we were doing this, we were, like, ‘Oh, my God — the BBC!’. We were just trying to disguise our actual terror. There was a lot of adrenaline…Once we started playing, we didn’t give a [damn]. They [the Stones] still don’t — bless their hearts. We just got off the road, and I wish there were a few more shows. We were just hitting a groove!”

“The BBC wanted us and we didn’t know really why or what we were doing. We were playing blues in bars, for Christ’s sake, but then we got a top 10 record and suddenly we’re the other alternative to the Beatles, bless their hearts. Yeah, I mean, they broke the doors down, especially Johnny. We always got along.”

“You think — you believe, the way you’re brought up in London — that the BBC know what they’re doing. Then you get there and find out they have no idea how to record a band like this.”

“The first thing I remember about my encounter with the BBC was there was this guy: Microphone Control Man. He had a huge mustache, like an officer in the RAF [Royal Air Force], one of them ginger jobs. He told me, ‘If you touch that microphone, I’ll decapitate you.’ I didn’t know what I would do with it anyway, but he had no more idea what to do with it than we did.”

“On those shows, you had no idea what the microphones were picking up and what was actually coming out of the radio. You just winged it and hoped for the best. Listening to it now, I think they captured the spirit of it all. I could argue about whether Brian was too loud or not, but apart from [stuff] like that, I think it’s a fascinating record as a piece.” Well said!

Companion to “Songs of Innocence” is a solid record

On Friday, U2 released their 14th studio album Songs of Experience after a one-year delay. While their first five records Boy (1980), October (1981), War (1983), The Unforgettable Fire (1984) and especially The Joshua Tree (1987) will probably always remain my favorites, after listening to the album various times, I agree with NPR’s take that it is a reboot the Irish rock band needed after the botched release of its predecessor.

Bono mentioned Songs of Experience the day Songs of Innocence was released in September 2014, but he didn’t start writing until after his serious bike accident in November that year. Using a mobile studio, the band worked on the album during the 2015 Innocence + Experience Tour. Work continued in 2016 with the goal to release the album toward the end of the year. But after the outcomes of the Brexit vote and the U.S. Presidential elections, U2 decided to hold and reassess the record. Bono reportedly ended up rewriting some of the lyrics.

The album opens with Love Is All We Have Left. As is common for U2, the lyrics and the music are credited to Bono and the band, respectively. The song was produced by Andy Barlow, one of multiple producers U2 used for the album, mirroring the approach for the predecessor. The tune’s opening lines Nothing to stop this being the best day ever/ Nothing to keep us from where we should be were criticized by various reviewers as out-of-touch optimism – not the first time U2’s lyrics have caused such reactions.

You’re The Best Thing About Me is the record’s lead single, which was released on September 6. The track was produced Jacknife Lee with Ryan Tedder, Steve Lillywhite and Brent Kutzle, who also were involved in most of the other tunes. As Rolling Stone reported, Bono characterized the catchy tune as “defiant joy” during an interview with Jimmy Fallon on the Tonight Show in September, adding, “It’s a love song to my Mrs., and in these difficult times it’s important to tell your loved ones how you feel.”

American Soul is one of album’s openly political tunes, produced by Lee with Joylon Thomas and Declan Gaffney. Even though it doesn’t spell out names, the spoken intro by rapper Kendrick Lamar leaves little doubt who the song refers to: Blessed are the bullies/For one day they will have to stand up to themselves/Blessed are the liars/For the truth can be awkward. The tune’s line, It’s not a place, this country is to me a sound of drum and bass, you close your eyes to look around, is taken from Lamar’s track XXX, which appeared on his most recent studio album Damn.

The Little Things That Give You Away has a touch of Joshua Tree with The Edge’s signature echo guitar sound. While it’s of course not new, to me this sound doesn’t get boring, and I actually wish he would have used it more often on the album. Thomas and Barlow are listed as the tune’s producers.

The last song I’d like to highlight is The Blackout, which U2 first presented on their Facebook page at the end of August. Produced by Lee with Tedder and Kutzle, the haunting track is characterized by a stomping bass line from Adam Clayton and The Edge’s heavily distorted guitar. In September, Bono told Rolling Stone the tune “started off its life about a more personal apocalypse, some events in my life that more than reminded me of my mortality but then segued into the political dystopia that we’re heading towards now.”

Songs of Experience, which appears on Island Records,  was recorded in Dublin, New York and Los Angeles. It is available on digital and CD as Standard and Deluxe, and as a double vinyl album. The album’s cover shows Bono’s son Eli Hewson and Sian Evans, The Edge’s daughter.

U2 will support the record with a North American tour next year, the eXPERIENCE + iNNOCENCE Tour 2018. Things will kick off in Tulsa, Okla. on May 2 and conclude in Newark, NJ on June 29. I saw U2 in July this year as part of their Joshua Tree Tour 2017 to commemorate the album’s 30th anniversary – an amazing show I don’t think they can beat!