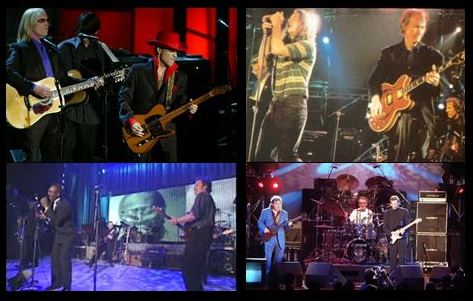 Last evening’s HBO broadcast of the 2018 Rock & Roll Hall Of Fame induction ceremony gave me the idea to take a look at previous inductions and highlight some of the performances there. I’m not getting into the nomination and selection process, the judges, which artists who currently aren’t in should be inducted, etc. – topics that undoubtedly will continue to be discussed. This post is about some of the great music that was performed at the induction festivities over the years.

I’d like to start with the 1999 induction ceremony that featured a great performance of In The Midnight Hour by Wilson Pickett and Bruce Springsteen, one of the inductees that year. They were backed by The E Street Band. Springsteen, a huge fan of Pickett, frequently performs some of the soul legend’s tunes during his shows. Recorded at Stax studios in Memphis, the song was initially released in June 1965 and became Pickett’s first hit for Atlantic Records. He co-wrote the tune with Stax session guitarist Steve Cropper.

In 1993, The Doors were inducted into the Hall. The band’s then-living original members Ray Manzarek (keyboards), Robbie Krieger (guitar) and John Densmore (drums) teamed up with Pearl Jam lead vocalist Eddie Vedder, who did a fine job singing the parts of the charismatic Jim Morrison. Here’s Light My Fire, one of my favorite Doors tunes that appeared on their eponymous debut album from January 1967. Like each of the original songs on the band’s first two records, the tune was credited to all members.

The 1993 inductees also included another legendary band: Cream. Jack Bruce (lead vocals, bass), Eric Clapton (guitar) and Ginger Baker (drums) reunited for the occasion. One of the songs they played was the terrific Sunshine Of Your Love from Cream’s second studio album Disraeli Gears, released in November 1967. The tune was co-written by Bruce, Clapton and Pete Brown. To this day I think Sunshine has one of the coolest guitar riffs in rock.

Among the 2018 inductees were The Moody Blues, a band whose second studio album Days Of Future Passed became one of the first successful concept albums and put them on the map as pioneers of progressive rock. They played the mighty Nights In White Satin from that record, but the first tune they performed was I’m Just A Singer (In A Rock & Roll Band). That song is from their seventh studio album Seventh Sojourn, which appeared in October 1972. It was written by John Lodge (vocals, bass, guitar), who together with Justin Hayward (lead vocals, guitar) and Graeme Edge (drums) is one of the remaining original members who performed at the induction.

Last but not least, here is a clip of what may be the best Rock & Roll Hall Of Fame performance to date: While My Guitar Gently Weeps, played during the induction of George Harrison as a solo artist in 2004. The performance featured Tom Petty, Jeff Lynne, Steve Winwood, Dhani Harrison and Prince, among others. It will forever be remembered for Prince’s incredible guitar solo. While My Guitar Gently Weeps appeared on the “White Album,” the ninth studio album by The Beatles from November 1968.