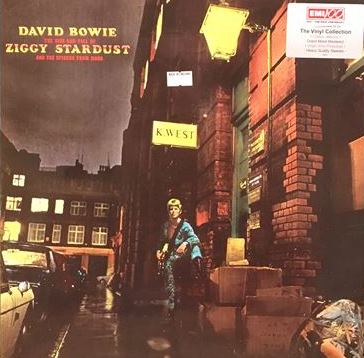 When it comes to David Bowie, I’ve always felt more drawn to his early years. Space Oddity, The Man Who Sold The World and Changes are among my favorite tunes. Ditto for Starman, Ziggy Stardust and Suffragette City. I was less fond of his Tin Machine venture and didn’t pay much attention to music he released thereafter. The Rise And Fall Of Ziggy Stardust And The Spiders From Mars is Bowie at his best, in my opinion. So guess what happened when I recently spotted a used audiophile vinyl copy of this gem at a small record store close to my house? Yep, I just couldn’t resist taking it home!

Often simply called Ziggy Stardurst, the record is Bowie’s fifth studio release and appeared in June 1972. Wikipedia characterizes it as a “loose concept album” revolving around a bi-sexual alien rock musician who becomes widely popular among teenagers before his fame ultimately kills him. Ziggy Stardust also became Bowie’s most notorious alter-ego during the massive tour that supported both this record and the follow-on Aladdin Sane from April 1973. Spanning the U.K., North America and Japan, the extended tour lasted from late January 1972 until early July 1973. One of the U.S. gigs, performed for radio broadcast in Santa Monica, Calif., became a fantastic bootleg. Since 2008 it’s been available officially as Live Santa Monica ’72.

Driven by his fondness for acting, Bowie liked to create on-stage personas for his music and totally immersed himself into the characters. In the case of Ziggy Stardust things got so intense that eventually he could no longer distinguish between himself and his alter-ego. Wikipedia quotes him from the biography Bowie: Loving The Alien (Christopher Sanford, Da Capo Press, Cambridge, Massachusetts, 1997): Stardust “wouldn’t leave me alone for years. That was when it all started to go sour … My whole personality was affected. It became very dangerous. I really did have doubts about my sanity.” Time for a another cheerful topic – music about earth’s demise! 🙂

The album opens with Five Years, which like all other tunes except one was penned by Bowie. Telling about the planet’s upcoming destruction, musically, the song is a great built. Generally speaking, when it comes to music, to me the lyrics tend to be second to the melody and musical arrangement – in other words, usually, it takes the two latter for a song to grab me.

Next up: The excellent Soul Love, a tune with a distinct cool groove. In addition to singing lead and backing vocals, Bowie is also playing acoustic rhythm guitar and alto saxophone. I admire people who can master various instruments and always wanted to be a multi-instrumentalist myself. I only managed to learn the acoustic guitar and electric bass, each with moderate success, but I’m getting off topic here!

Starman was the last song Bowie wrote for the album, after RCA had noted it was lacking a single. Really? How about the catchy rocker Suffragette City? In any case, I’m glad Bowie obliged, since the result was one of his all-time greatest tunes: Starman. It ended up replacing a take of Chuck Berry’s Around And Around, simply called Round And Round. That cover eventually became the B-side to Drive-In Saturday, an April 1973 single from the Aladdin Sane album. BTW, Suffragette City ended up as the B-side to Starman – I think it should have been it’s own (A-side) single!

The record’s title track is another highlight. I’ve always loved the guitar riff – simple yet effective! Plus, it’s about a guy playing guitar. Did I mention guitarists are cool dudes? 🙂

The last tune I’d like to highlight, perhaps you guessed it, is Suffragette City, the tune on the I album I like best and perhaps my favorite Bowie song overall. It’s simply a kick-ass rocker – ahhh, wham bam, thank ya man! (taking some creative license here). Initially, Bowie had offered the song to then-struggling Mott the Hoople. His condition: Don’t break up, guys! While the band declined that tune, they went with Bowie’s All The Young Dudes instead, another catchy song. Oh, and it became their biggest hit in the U.K. and extended their career for more than five years (until 1980) – not a bad outcome!

The album’s music arrangements are credited to Bowie and Mick Ronson (guitar, piano, vocals), who was part his excellent backing band The Spiders From Mars. The other members included Trevor Bolder (bass) and Mick Woodmansey (drums). I need to check out whatever happened to these guys after their last performance with Bowie. That show at the Hammersmith Odeon in London on July 3, 1973 was captured in the 1973 documentary Ziggy Stardust And The Spiders From Mars by D.A. Pennemaker, a film I’ve also yet to watch!

The Ziggy Stardust album was recorded at Trident Studios in London, U.K., and co-produced by Bowie and Ken Scott, one of the five main recording engineers for The Beatles. That in and of itself is already pretty cool, but there’s more: Scott has also worked with other big names, such as Elton John, Pink Floyd, Mahavishnu Orchestra, Jeff Beck and Kansas. And he co-produced additional Bowie albums, including Hunky Dory (December 1971), Aladdin Sane and Pin Ups (October 1973).

Ziggy Stardust has been called Bowie’s breakthrough album. It peaked at no. 5 on the British Official Albums Chart and no. 75 on the Billboard Top LPs & Tape chart (now called the Billboard 200). The album has received numerous accolades over the years. It is ranked no. 35 in Rolling Stone magazine’s 2013 list of the 500 Greatest Albums of All Time. In 1997, it was named the 20th greatest album of all time in a Music of the Millennium poll in the U.K. In 2017, the U.S. Library of Congress selected the record for preservation in the National Recording Registry, deeming it “culturally, historically, or artistically significant.”