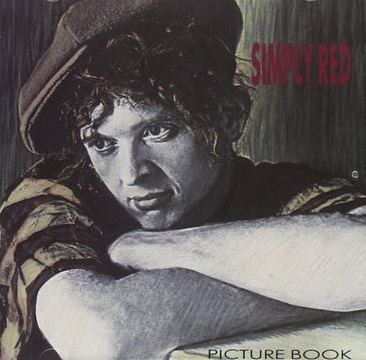 Frequent visitors of the blog perhaps may be a bit surprised that I chose to highlight Picture Book by Simply Red. After all, sometimes it may appear I just can’t get enough of classic rock and blues. And while it’s certainly true these two genres form my core wheelhouse, I also enjoy other music.

Released in October 1985, Picture Book was the debut album by Simply Red. I’ve always dug it for its smooth soul and funky sound and Mick Hucknall’s distinct lead vocals. Before getting to some of the record’s music, I’d like to briefly touch on the band’s background.

Simply Red were formed in Manchester, England in 1984. Surprisingly, and I had not known about this until I read it on Wikipedia, most of the initial members came from musical backgrounds that were very different from Simply Red. Lead vocalist Mick Hucknall’s previous music venture was a punk band called The Frantic Elevators. That band was founded in 1976 and in addition to Hucknall (vocals) included Neil Moss (guitar), Brian Turner (bass) and Kevin Williams (drums). After seven years, The Frantic Elevators called it quits – ironically after the release of their fourth and final single Holding Back The Years had finally gotten them some attention.

In 1985, Simply Red got a record deal with Elektra and started working in the studio. After recording one tune, Red Box, which would become the B-side of their first single Money’s Too Tight To Mention, Fryman left the band and was replaced by Sylvan Richardson on guitar. Let’s get to some music from Picture Book.

Here’s the opener Come To My Aid, a funky tune with a catchy melody. Co-written by Hucknall and McIntyre, the track also appeared separately as the album’s second single in August 1985.

One of my favorite songs on Picture Book is the second track Sad Old Red. I love the jazz and blues groove of the tune, which was written by Hucknall. It’s the kind of music that makes you snip your fingers.

Next up: A fantastic cover of Heaven, which was co-written by David Byrne and Jerry Harrison of the Talking Heads and initially appeared on the band’s third studio album Fear Of Music from August 1979. I like the original but feel Simply Red kicked it up a notch by turning the tune into a beautiful soul ballad.

The second great cover on the album is the above mentioned Money’s Too Tight (To Mention). The song was co-written by brothers John Valentine and William Valentine who performed as The Valentine Brothers and first recorded it in 1982.

The last tune I’d like to call out is Holding Back The Years, the previously noted tune by The Frantic Elevators. Co-written by Hucknall and the band’s guitarist Neil Moss, the song also became Simply Red’s most successful single, topping the U.S. Billboard Hot 100 and peaking at no. 2 on the U.K. Singles Chart.

Simply Red went on to record nine additional studio albums before disbanding in 2010. By that time, Hucknall was the only remaining original member and Simply Red essentially had become his solo project. In 2015, the band reunited and has since released a new studio album, Big Love, in May 2015 and conducted two anniversary tours.