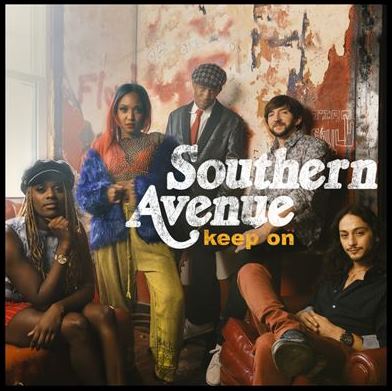 I rarely get excited when it comes to contemporary music – most of what I know to me sounds generic, artificial and without any true soul. A caveat here is that I’m primarily referring to the mainstream. One of the few exceptions of contemporary music I dig is Southern Avenue, a band from Memphis, Tenn. that blends southern soul, blues and R&B. More regular visitors of the blog may recall that I’ve covered them on previous occasions, for example here. Today, Southern Avenue released Whiskey Love, the first single from their upcoming sophomore album Keep On set to drop May 10.

According to the band’s website, Whiskey Love is one of the original tracks on the record. The tune has a cool bluesy groove, fueled by rhythm section Tikyra Jackson (drums) and guest bassist Gage Markey, along with nice guitar work from Ori Naftaly. Keyboarder Jeremy Powell and a horn section set great accents. Tierinii Jackson once again is delivering a powerful and soulful performance on lead vocals. This is going to be a great song live!

The horn section features saxophonist Art Edmaiston, who has played with artists like Levon Helm and Gregg Allman, and trumpet player Mark Franklin. In addition to Allman, Franklin has been in sessions with the likes of Aretha Franklin, B.B. King, Solomon Burke and Booker T. & the M.G.s. – holy mackerel!

“Making this album was an interesting journey,” Ori explained. “Our first album was recorded very fast and released very fast. With this one, we spent a long time planning, and we knew how we wanted it sound. For me, it’s a big progression from the first album.” Added Tierinii: “The experience was completely different from making the first one. We learned a lot about each other and a lot about the band.”

“The thing that stood out most to me about Southern Avenue is their dedication to making this record ‘the hard way’,” noted producer Johnny Black. “Even in their selection of studios; by picking Sam Phillips Recording, the band, in essence, forced themselves to record within the same parameters as some of their heroes. And while that process may have taken extra time, it was well worth the effort.”

“What makes it Southern Avenue is that when we come together, the music we make together is music we could never come up with individually,” Tierinii further stated. “It’s really rewarding to have so many influences in the band, and that we can find the balance between them.”

The last comment shall belong to Ori: “I’m proud that we don’t sound like anyone else. We’ve been all over the world, from Australia to Poland to Norway to Spain to Canada to Mexico. Those experiences, and all the highs and lows, it’s all reflected in the music. I’ve waited all my life to be in a band like this, and it’s amazing to me that I get to play with these people every night.”

Southern Avenue are one of the hardest touring bands I’ve seen. That’s great news for their fans. If you happen to be in Aspen, Colo., you can see them at The Après tonight. Other upcoming gigs include Chicago (Apr 13), Asheville, N.C. (Apr 19), Salisbury, N.C. (Apr 20) and New Orleans (Apr 28). Altogether, the band’s current schedule lists more than 50 gigs between now and early November in the U.S., Canada and various European countries, and I’m sure more will be added!