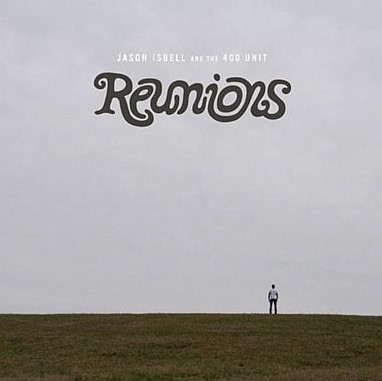 While I had heard of Jason Isbell before and listened to some of his past music, I had not taken a closer look at the singer-songwriter from Green Hill, Ala., who at age 41 has experienced both remarkable success and full-blown addiction to alcohol and cocaine in his late ’20s. Both sides of his story provide important context for Reunions, Isbell’s new album, which he recorded with his backing band The 400 Unit. It was broadly released yesterday, May 15.

Apparently, Isbell grew up in a musical family. His grandfather and uncle showed him how to play various instruments. As a 6-year-old, he learned the mandolin, and in high school, he played the trumpet and French horn. Somewhere along the way, he picked up the guitar and started playing in a garage band and a country cover band. Eventually, he met session bassist David Horn, whose son Patterson Hood was a co-founder of alternative country and Southern rock band Drive-By Truckers. When he was 21, Isbell got a publishing deal with FAME Studios in Muscle Shoals, Ala., where he worked until he joined Drive-By-Truckers the following year during their supporting tour for their third studio album Southern Rock Opera.

Isbell stayed for six years and recorded three studio albums with the band, contributing guitar and vocals, and writing some of their songs. During these years with Drive-By Truckers, Isbell developed his alcohol and cocaine addiction. Apparently, it did not slow him down much. Following his departure from the band in April 2007, Isbell wasted no time to launch a solo career and released his solo debut Sirens of the Ditch in July that year.

The 400 Unit, weirdly named after a colloquial name for the psychiatric ward of a local hospital in Florence, Ala., came together for Isbell’s sophomore album Jason Isbell and The 400 Unit released in February 2009. Two years later, Isbell agreed to enter a rehab program at a Nashville facility. He managed to overcome his addiction and has been sober since. In February 2013, Isbell married singer-songwriter and violinist Amanda Shires. Since 2011, she had been a guest on his albums and eventually became a member of The 400 Unit. In parallel, Shires continued to pursue her solo career. In 2019, she also formed country band The Highwomen. Isbell played guitar on their eponymous debut album, which appeared last September.

Since Isbell got out of drug rehab, he won many accolades for his music, which among others include four Grammy awards and various Americana Music Honors & Awards. They turned out to be a mixed blessing when making his new album. “For some reason, I felt really pressured,” Isbell told The New York Times. “You think, ‘If I make a record that’s not great, everybody’s going to dismiss me entirely. If I [expletive] up my relationship, everybody’s going to be so shocked that they’ll write me off completely.’ All those things, when you say them out loud sound ridiculous, but they stay in there and gnaw at you.”

The pressure took a toll on his marriage and at some point prompted Shires to move to a motel, since she felt belittled. “I want him to make the best art he can but not at the expense of making me feel less,” she noted to The New York Times. “I needed space because lines were getting crossed.” So with all the drama surrounding the album, how did it turn out? Pretty good, in my opinion, though one hopes this outcome happened despite the aforementioned challenges, not because of them. Let’s get to some music!

Here is the opener What’ve I Done to Help. Like all of the remaining nine tracks on the album, the tune was written by Isbell. “It seems like this song set the right mood for the record,” Isbell told Apple Music. “It’s a little bit indicting of myself, but I think it’s also a positive message: Most of what I’m talking about on this album is trying to be aware as possible and not just get lost in your own selfish bubble, because sometimes the hardest thing to do is to be honest with yourself.” BTW, none other than David Crosby provides harmony vocals on the tune!

In Overseas, Isbell was trying to write a song that’s about multiple things at once, which he views as a big challenge. “On the one hand, you have an expatriate who had just had enough of the country they’re living in and moved on and left a family behind,” he explained to Apple Music. “And the other is more about my own personal story, where I was home with our daughter when my wife was on tour for a few months.” Apparently, the song was inspired by Eric Clapton, who once said in an interview he didn’t feel he would ever be a great songwriter since he wasn’t able to write allegorically. “I was probably 12 or 13 when I read that,” Isbell said, “and it stuck with me.”

Running With Your Eyes Closed has a little bit of a Mark Knopfler guitar vibe, which is definitely part of the reason it speaks to me. According to Isbell, “It’s a love song, but I really try hard to look at relationships from different angles, because songs of the initial spark of a relationship – that territory has been covered so many times before and so well that I don’t know that I would have anything new to bring.” I really dig the sound of this track. Check it out!

One of the most personal tracks on the album is It Gets Better. “I was awake until four in the morning, just sort of laying there, not terribly concerned or worried about anything,” Isbell explained. “And there was a time where I thought, ‘Well, if I was just drunk, I could go to sleep’. But then I also thought, ‘Well, yeah, but I would wake up a couple hours later when the liquor wore off.’ I think it’s important for me to remember how it felt to be handicapped by this disease and how my days actually went. I’ve finally gotten to the point now where I don’t really hate that guy anymore, and I think that’s even helped me because I can go back and actually revisit emotions and memories from those times without having to wear a suit of armor.”

Let’s do one more. Here’s the closer Letting You Go, a tune Isbell wrote for his four-year-old daughter, recalling her as a baby and fast-forwarding to picture her getting married and leaving the house. Well, that certainly looks like a big jump into the future; then again, time flies, as I can attest when it comes to my own son who is 18 now – how did that happen so quickly? “Once, when my daughter was very little, my wife said, ‘Every day, they get a little bit farther away from you’,” Isbell reflected. “And that’s the truth of it: It’s a long letting-go process.” He clearly is very attached to the little girl.

So what does David Crosby think about Isbell? “Jason has become one of the best writers in the country,” he commented to The New York Times. “And my idea of really good writers is Paul Simon, Joni Mitchell, Bob Dylan. His singing is emotional. It’s honest. He’s really trying to tell you the story.” Hopefully, Crosby’s praise won’t put additional pressure on Isbell when comes to making his next record. As strange as it sounds, it might actually be a good thing for Isbell if he doesn’t get a ton of accolades for Reunions!