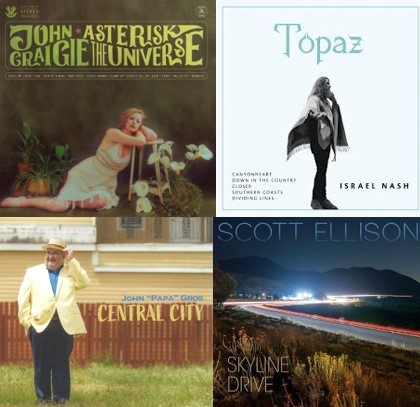 For this latest installment of the recurring feature, I had lots of new/recently released music to choose from: various singer-songwriters, Americana, rock and blues. It would have been easy to add at least four additional songs, but I’d like to keep these posts to no more than four to six tracks. As in previous installments, it’s a mix of young and more established artists, which is exactly what I’d like it to be. I’m really glad that my foray into new music continues to yield many promising discoveries. Here we go!

From his website: Renowned for his eloquent Americana style, engaging live shows, and off-the-cuff clever observations, John Craigie carries on the legacy of classic singer-songwriters, while blazing a trail of his own. Recently, that trail twisted and turned into new territory for the Portland, OR performer who The Stranger appropriately dubbed, “the lovechild of John Prine and Mitch Hedberg.” Released on May 8, Don’t Ask is the latest single from the 39-year-old’s upcoming new album Asterisk the Universe, slated for June 12. Two additional tracks from the record, which should be his seventh, are already available. According to Wikipedia, Craigie has been called a “modern day troubadour” reminiscent of Woody Guthrie and Ramblin’ Jack Elliott. While I don’t know about that, I’ve no doubt I really dig what I’m hearing.

Israel Nash is a 39-year-old singer-songwriter from Dripping Springs, TX. Wikipedia puts his music in the Americana, rock and indie rock genres. Based on his most recent release – the EP Topaz – I can also hear some soul influences. Nash came to Texas via New York from Missouri, his original home. After moving to New York in 2006 and performing in local clubs, Nash independently released his debut album New York Town in 2009. After the appearance of his sophomore album Barn Doors and Concrete Floors in March 2011, Nash moved to Dripping Springs late in the same year. He has since released three additional studio records, one life albums and two EPs including Topaz, which came out on May 22. Here’s the great opener Canyonheart. Check out that tune’s beautiful warm sound!

To start with, what an awesome name, and very much New Orleans – admittedly, it was part of the reason why I took a closer look at John “Papa” Gros, who hails from the big easy. For over three decades, Gros has brought his city’s celebratory culture to listeners around the globe., according to his website. Gros mixes all the sounds of New Orleans – funk, trad jazz, brass band, blues  – and makes it his own signature gumbo. His new solo album Central City, shows Gros capturing New Orleans’ distinct feel-good charm with help from some of its’ most renowned players. Gros began playing gigs when he was just fifteen years old but didn’t truly kick off his career until after graduating from Loyola in 1989 with a degree in French Horn performance…Between 2000 and 2013, Gros began his transition into the spotlight by leading Papa Grows Funk, a highly revered group that mixed hard-hitting funk grooves with often unpredictable jazz spontaneity. The band has since broken up, and John “Papa” John has carried on with a solo career. Central City, which came out on April 17, is his third solo effort. Here’s the beautiful It’s Raining. I hear some Randy Newman in here!

Are you ready for some good ole’ blues and honky tonk? Enter singer-songwriter, guitarist and blues rocker Scott Ellison was born in Tulsa, Okla. in on June 13, 1954. According to his website, he started his career in the ’70s, playing with country singer Jesseca James and blues artist Clarence “Gatemouth” Brown in 1981. After relocating to Los Angeles in the mid-’80s, Ellison played with The Box Tops, The Shirelles, The Drifters and Gary U.S. Bonds, among others. By the ’90s he had formed his own blues band and opened for other artists like Joe Cocker, The Fabulous Thunderbirds and Buddy Guy. In 1993, Ellison’s first solo album Chains of Love appeared. Skyline Dive is his most recent record, which appeared on May 8. Here’s All Wound Up, a nice smoking blues rocker – my kind of music!

I couldn’t find a lot of information on Fretland, an Americana band from Snohomish WA. The apparently still young group was founded by singer-songwriter Hillary Grace Fretland (vocals, guitar). The band also includes Luke Francis (guitar), Jake Haber (bass) and Kenny Bates (drums). Say It Well is the beautiful closer of Fretland’s eponymous album released on May 22. It’s a very bare bones acoustic tune, which sounds like is performed by Hillary with guitar only.

Dr. Joe is another artist I had not heard of before. From his website: Based in Austin TX but raised on a farm outside Salina, Kansas, band leader Joe Sparacino spent his early childhood learning piano from a southern gospel choir matron and listening to his family’s old vinyl collection of Ray Charles, Leon Russell and James Booker. Their debut single: “Tell Your Mother” was produced by Vance Powell (six-time Grammy Award winning record producer) whose credits include Jack White, The Raconteurs, White Stripes, Kings of Leon, Arctic Monkeys, Chris Stapleton, etc. and recorded at his famed Sputnik Studio in East Nashville. GOOD DAYS [apparently their second single] was recorded by – Niles City Sound (Leon Bridges) in Fort Worth Texas with additional work by Adrian Quesada (Black Pumas), Abhi The Nomad and Austin Jenkins (White Denim). It was mixed and mastered at Abbey Road in London. Believer is Dr. Joe’s latest single, which came out on April 10 (Good Friday). I think this tune is cooking. I suppose this means I’m a believer! 🙂

8 thoughts on “Best of What’s New”