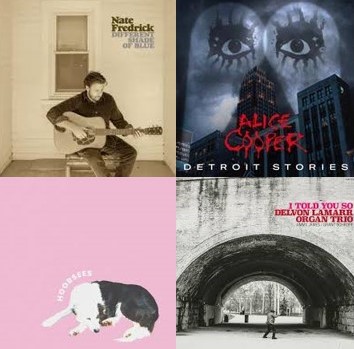 When my weekly look at newly released music is delayed, it’s usually for one of two main reasons: Work has kept me pretty busy (not a bad thing!), or I had a hard time finding new music that sufficiently grabbed me to highlight it in a feature cheerfully titled “Best of What’s New.” This time, it was a combination of both. But, occasionally good things take time, and ultimately, I think I found a pretty solid and diverse set of new music, including Americana, shock rock, indie rock and funky soulful organ-driven jazz. Let’s get to it!

I’d like to kick things off with Nate Fredrick, a Nashville-based Americana singer-songwriter. According to his website, the native Missourian learned to play guitar as a 12-year-old and started writing songs 10 years thereafter. In 2015, he relocated to Nashville and wrote more than 100 tunes during the two following years. Fredrick’s website characterizes his music as “bluesy Americana style”, citing Guy Clark, Creedence Clearwater Revival and Van Morrison as some of his influences. Well, it might have taken him a while to transition from playing the guitar to writing his own songs, but the results are certainly compelling. Be the One is from Fredrick’s great-sounding debut album Different Shade of Blue released yesterday (February 26). “Somewhere in trying to figure out how to craft a good song, I figured out how not to just write a pile of sad songs,” he said about his album. “It’s not that my situation is different or even better, but I’ve found a different way to perceive my personal circumstances.”

Alice Cooper/Drunk and in Love

If you happened to read my February 14 Sunday Six installment, you may recall it featured a tune from Alice Cooper’s then-forthcoming album. Mr. Shock Rock’s 21st solo release Detroit Stories appeared yesterday. With 15 tracks and a total length over just 50 minutes, it’s a solid effort. Except for three covers of tunes by Lou Reed, Fred “Sonic” Smith (MC5) and Bob Seger, Cooper co-wrote all other tracks. Here’s Drunk and in Love, a slow burning bluesy rocker. The other co-writers include producer Bob Ezrin and Dennis Dunaway, the original bassist of the Alice Cooper rock band. “Romeo and Juliet is a great love story, but so is a love story about a guy that lives in a box under a bridge with a bunch of other people standing around big oil cans trying to keep warm—and he’s in love with the girl who lives in another box,” Cooper told Apple Music about the tune. “So it’s a very touching little love song. And just the fact that their situation is different than a normal one doesn’t mean their love is any less intense.” Check out Cooper’s cool harp solo that starts at around 1:25 minutes into the song, harmonizing with the lead guitar – pretty neat!

Hoorsees are an indie rock band from Paris, France. The members are Alex Delamard (lead vocals, guitar), Thomas (lead guitar, backing vocals), Zoe (bass, backing vocals) and Nicolas (drums, backing vocals). Unfortunately, there is very little public information on their background. Get Tired, written by Delamard, is from the band’s eponymous full-length debut album that came out on February 19. Based on a somewhat measly artist page on the website of their U.S. label Kanine Records, the album is a follow-on to a previously released EP, Major League of Pain. No word about its release data, not to mention when Hoorsees were founded – jeez, so much for effective artist promotion!

Delvon Lamarr Organ Trio/Hole in One

Wrapping up this installment is a find I’m particularly excited about as a huge fan of the Hammond B-3: Delvon Lamarr Organ Trio, which blend organ jazz with soul and funk. Here’s how their website describes it: Delvon Lamarr Organ Trio—or as it is sometimes referred to, DLO3—specialize in the lost art of “feel good music.” The ingredients of this intoxicating cocktail include a big helping of the 1960s organ jazz stylings of Jimmy Smith and Baby Face Willette; a pinch of the snappy soul strut of Booker T. & The M.G.’s and The Meters; and sprinkles Motown, Stax Records, blues, and cosmic Jimi Hendrix-style guitar. It’s a soul-jazz concoction that goes straight to your heart and head makes your body break out in a sweat…The band features organist Delvon Lamarr, a self-taught virtuosic musician, with perfect pitch who taught himself jazz and has effortlessly been able to play a multitude of instruments. On guitar is the dynamo Jimmy James who eases through Steve Cropper-style chanking guitar, volcanic acid-rock freak-out lead playing, and slinky Grant Green-style jazz. From Reno, Nevada is drummer Dan Weiss (also of the powerhouse soul and funk collective The Sextones). Dan’s smoldering pocket-groove drumming locks in the trio’s explosive chemistry. Hole in One, co-written by Lamarr (credited as Delvon Dumas) and James (credited as Jabrille Williams), is the groovy opener of the band’s third album I Told You So released January 19. More than Booker T. Jones, I can hear Steve Winwood in here. To me, it’s one of those rare tunes where you only need to hear the first few bars to realize you love it!