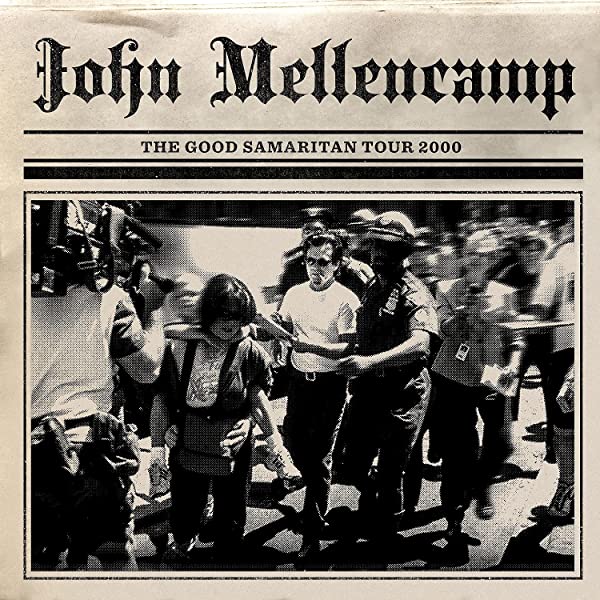 I’ve listened to John Mellencamp since 1982 and Jack & Diane when he was still known as John Cougar and would call myself a fan. But until last Friday, I had not been aware of his Good Samaritan Tour, a series of free, stripped down and unannounced concerts he gave across the U.S. in the summer of 2000. Now the tour is revisited in a documentary that started to stream on the YouTube channel of Turner Classic Movies (TCM) on August 27. It also coincided with the release of a companion album, The Good Samaritan Tour 2000.

According to Mellencamp’s website, the documentary is “narrated by Academy® Award winner Matthew McConaughey,” chronicling his “historic tour in 2000 when he performed for free in public parks and common spaces across the country. The film was executive produced by Federal Films, produced by John Mellencamp and Randy Hoffman, directed by Shan Dan Horan, mixed by Andy York and has special contributions by Nora Guthrie.” Nora is the daughter of Woodie Guthrie, one of Mellencamp’s big influences.

As the documentary notes in the beginning, Mellencamp viewed the tour as a way to thank his fans for all their support they had given him throughout the years. The impromptu gigs were performed without official permission from local authorities. “We also want to say this is not a concert,” Mellencamp tells an audience in Chicago. “I’m just playing on the street. So if you can’t hear I’m sorry, but we didn’t bring a big PA system because we didn’t want it to be a concert.”

However, Mellencamp did bring along two young musicians: accordion player Mike Flynn and violinist Merritt Lear. There was also Harry Sandler, Mellencamp’s road manager at the time, who helped organize where the trio would play. There was no road crew. “It was really kind of a hippy thing to do, you know,” Mellencamp notes in the documentary. “It reminded me of what I had seen happen in Washington Square, you know, during the ’60s when, you know, people would play in Washington Square and people would sit around, like it was a folk thing.”

“I had my little accordion, Merritt had a fiddle, John had his two acoustic guitars,” Flynn recalls in the film. “It was really raw and stripped down is to say the least.” Adds Lear: “My whole involvement with this tour started with a completely cold phone call…Mike and I had dated, broken up, and he put me up for the tour, coz they needed a violin player at the last second…They needed someone and he said , ‘call Merritt, she’ll be psyched to do it…And they called me and they said, ‘would you like to go on a summer tour with John Mellencamp? We’re leaving soon. I was shocked and then I quit my job and we were off and running.”

“The idea for the tour came to light and was a vague notion on what Woodie Guthrie had done when he would go and play in the fields for the workers in California,” Mellencamp explains. For the most part, the free performances featured songs he liked, not tunes he had written. While the free gigs were very well received by the public and the crowds grew larger at each appearance, the authorities in Detroit were less than pleased when they learned about Mellencamp’s concert there. Harry Sandler was even told they would get arrested if they played there. While many cops showed up at the concert, fortunately, everything stayed peaceful and nobody was arrested. The documentary can be watched here. Time for some music!

Let’s kick it off with In My Time of Dying, a traditional gospel tune that has been recorded by numerous artists. Blind Willie Johnson’s recording from December 1927 is the first known published version.

Here’s Bob Dylan’s All Along the Watchtower, which first appeared on his eighth studio album John Wesley Harding from December 1967. The most famous version of the song was recorded around the same time by Jimi Hendrix for Electric Ladyland, the third and final studio album by The Jimi Hendrix Experience released in October 1968.

Next up: Street Fighting Man, The Rolling Stones’ classic that first appeared as a U.S. single in August 1968, ahead of the Beggars Banquet album from December of the same year.

Let’s do two more: Here’s Cut Across Shorty, which was first popularized by Eddie Cochran in March 1960 as a rock & roll style tune. It’s been covered by various other artists including Rod Stewart, Faces and, obviously, John Mellencamp.

The last track I’d like to highlight is a Mellencamp original: Pink Houses, which he recorded for his seventh studio album Uh-Huh that appeared under his transitional artist name John Cougar Mellencamp in October 1983. In this take, Merritt Lear got to sing the first verse.

I really dig John Mellencamp’s transition from his early straight heartland rock years to an artist who embraces a more stripped back roots and Americana sound. As such, the prominence of the accordion and the fiddle on these Good Samaritan song renditions are right up my alley.

While cynics might dismiss the Good Samaritan Tour as a PR stunt, John Mellencamp doesn’t strike me as the kind of artist who would that. Sure, I guess he didn’t mind the buzz his free summer tour generated. But Mellencamp, one of the co-founders of Farm Aid, is a person who supports social causes, so I buy that his primary motivation for the free concerts was to give back to his fans.