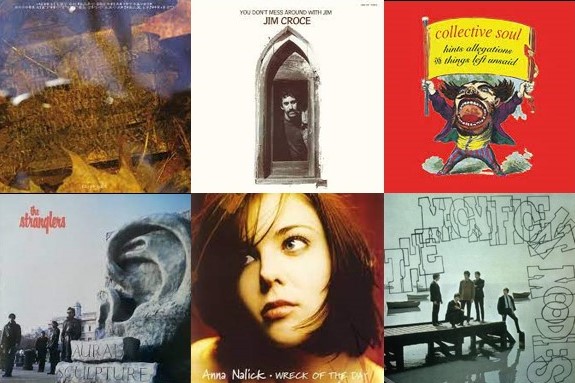 Welcome to another Sunday Six, my weekly celebration of music in different flavors from the past seven decades, six tunes at a time. Get ready for another eclectic zigzag journey. It starts with some contemporary ambient electronic music. The trip then takes us to an acoustic folk gem from 1972, soft grunge from 1993, new wave from 1984 and a beautiful pop ballad from 2004, before we wrap up with a ’60s rock gem. Hop on board and let’s go!

I’d like to start this post with a music genre I rarely pick: Ambient electronic music. Recently, I stumbled upon British electronic music producer Leif Knowles. According to his Apple Music profile, Knowles who is known as Leif creates lush, emotive music ranging from the deep, smooth house of his 2013 debut Dinas Oleu to the warm, soothing ambient of 2019’s Loom Dream. Born in Barmouth, Wales and brought up by a musician father who played the Celtic harp and the guitar — which he taught his son — Leif grew up with a love of music, playing in guitar bands in high school. Through the radio, he was introduced to electronic acts such as Tricky and the Orb, before discovering house and techno through free outdoor raves in the forest…Owing to his formative experiences, his music was inspired by a fusion of the natural world and the dancefloor, and he incorporated organic elements such as guitar, bass, and percussion into a sound produced using a fairly simple setup of computer and synth. I’m completely new to Leif and can’t quite explain what drew me into Seven Hour Flight to Nowhere, a track from his new album 9 Airs released on October 29. I find it very soothing.

Jim Croce/Time in a Bottle

Next, I’d like to go back to April 1972 and a song I’ve always loved because of its beautiful lyrics, melody and neat acoustic guitar-playing: Time in a Bottle by Jim Croce. At the time I first heard this gem, I was taking (acoustic) guitar lessons. Croce’s great finger-picking was an immediate attraction and a motivation to work hard on my finger technique. Time in a Bottle is from Croce’s third studio album You Don’t Mess Around with Jim that appeared in April 1972. He wrote it like all other songs on the record. Sadly, in September of the following year, Croce became yet another music artist who perished in a plane crash. Time in a Bottle was also released separately as a single in the wake of Croce’s death in November 1973. It became his signature song and biggest hit, topping the mainstream charts in the U.S. and Canada. Reminds me of John Lennon and the post-mortem success of (Just Like) Starting Over – the bitter cruelty of an artist’s success when they have passed and can no longer enjoy it!

This next song takes me back to my grad school days at SUNY Stony Brook on Long Island, N.Y. I can easily say these two years (1993 and 1994) were the most intense period of my student life where I felt I studied as much as during the prior six years of university in Germany! At the time, there was lots of academic freedom in Germany, and you pretty much could study at your own pace – let’s just say I allowed myself to be distracted and wasn’t exactly in a hurry to finish my graduate degree. Anyway, I well remember Shine by Collective Soul. The lead single, off their debut album Hints Allegations and Things Left Unsaid, received frequent play on the Connecticut FM mainstream radio station I usually had on in the car (blanking on the name now). Originally, the song was released in 1993 on the independent label Rising Storm Records. Subsequently, Collective Soul got a deal with Atlantic Records, which reissued the single and the album in October 1993 and March 1994, respectively. I find it a quite catchy tune and also like the soft grunge sound. Collective Soul, which were founded in 1992, are still together, with three original members remaining in the current lineup.

Continuing a bit of nostalgia, let’s go back another 10 years to 1984 and The Stranglers. I hadn’t heard that name in ages until I saw their tune The Raven was picked by A Sound Day as part of a song draft by fellow blogger Hans from Slice the Life – thanks, guys! In my case, The Stranglers are similar to The Cars – I know a number of their songs based on radio play but haven’t further explored the group. The first Stranglers tune I recalled after the song draft prompt was Golden Brown, their first hit from 1992. When I checked Wikipedia, some of their other ’80s songs popped up like Always the Sun (1986), Skin Deep and my favorite No Mercy. The last two tracks were on the group’s eighth studio album Aural Sculpture from November 1984. Credited to all four members of the band at the time – Hugh Cornwell (vocals, guitar), Jean-Jacques Burnel (bass, vocals), Dave Greenfield (keyboards) and Jet Black (percussion) – No Mercy didn’t match Golden Brown’s chart success but still gave them a decent hit. Call me crazy: If The Rolling Stones would have gone new wave, this is how I imagine they could have sounded! BTW, like Collective Soul, The Stranglers exist to this day and released their 18th studio album Dark Matters on September 10. Based on sampling a few tunes, it doesn’t sound bad.

Time to leave the ’80s and ’90s behind and travel to the current century, specifically the year 2004. In October that year, American singer-songwriter Anna Nalick released Breathe (2 AM), the lead single from her debut album Wreck of the Day that appeared in April of the following year. Let’s just say, both the beautiful ballad and the record weren’t exactly a wreck. They became Nalick’s most successful song and album, respectively. Breathe (2 AM) is the only tune by Nalick I can name. She’s still around (in fact she’s only 37) and has released three additional albums to date, most recently The Blackest Crow from December 2019. I find Breathe (2 AM) a pretty compelling and catchy pop ballad. Yes, it’s a bit on the lush side, but the intensity and Nalick’s vocals are just stunning!

Sadly, on Thursday (November 11), Graeme Edge, co-founder and drummer of The Moody Blues, passed away from cancer at the age of 80. As such, I’d like to wrap up this post with some music by the Moodies whose 1967 sophomore album Days of Future Passed has become one of my favorite ’60s records. Pre-dating this gem is Go Now, the band’s second single from November 1964. Co-written by Larry Banks and Milton Bennett, the song originally was released by Larry’s wife, American soul singer Bessie Banks, in January 1964. But it was the version by The Moody Blues that gained international popularity, topping the charts in the UK, reaching no. 10 in the U.S. and The Netherlands, no. 2 in Canada and no. 12 in Australia. The tune was also included on the band’s debut album The Magnificent Moodies from July 1965, which in the U.S. and Canada was titled Go Now – The Moody Blues #1 and had a different song lineup. It was the only Moodies album to feature guitarist and vocalist Denny Laine who in 1971 joined Paul McCartney’s Wings.

17 thoughts on “The Sunday Six”