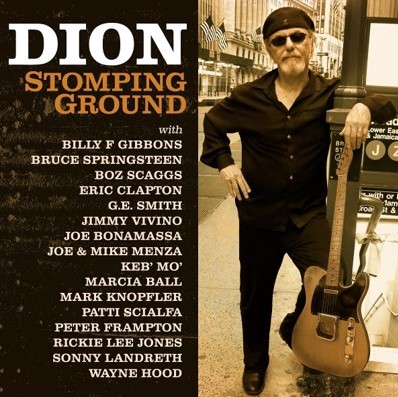 The first time I heard of Dion DiMucci dates back at least 40 years when listening to The Wanderer on a Sunday evening oldies show that aired on my favorite FM radio station back in Germany. While I immediately loved that tune then and every time I heard it thereafter, I pretty much had forgotten about Dion – until last year’s Blues With Friends, a great album of collaborations with prominent other artists. Now he’s back with an encore, and though I’m not as surprised as I wrote in June 2020, Stomping Ground still is a fun album most blues fans will likely enjoy.

As reported by Rock & Blues Muse, Stomping Ground appeared on November 19 and was produced by Wayne Wood and Dion, and recorded during the pandemic. Wood had also worked with Dion on Blues With Friends. And just like on that album, Dion wrote or co-wrote most of the songs on Stomping Ground with Mike Aquilina. Blues With Friends ended up topping Billboard’s Top Blues Albums chart. And guess who the current no. 1 is, so who can blame Dion for sticking with the formula – what a remarkable late-stage career triumph!

Let’s get to some music. Unless noted otherwise, all featured tracks were co-written by Dion and Aquilina. Here’s the opener Take It Back featuring blues rock guitarist Joe Bonamassa who also is a co-founder of Keeping the Blues Alive Records (KTBA), the label on which the album appears. At 82 years, Dion sounds and looks great! Bonamassa’s guitar work is pretty neat as well.

If You Wanna Rock ‘n’ Roll, written solely by Dion, features Eric Clapton. Love how that tune shuffles along!

Here’s a nice slower blues, There Was a Time. Dion’s guest artist on that tune is Peter Frampton. Sadly, more recent news on Frampton hasn’t been great. In 2019, he announced a farewell tour and revealed he had been diagnosed with a progressive muscle inflammation and wasting disorder called inclusion body myositis. As such, it’s particularly great to hear the disease evidently hasn’t started to noticeably impact his ability to play guitar.

The last track I’d like to call out is Angel in the Alleyways. For this tune, Dion teamed up with Patti Scialfa and her husband Bruce Springsteen, an intriguing pairing. Check out the song’s great sound. I love Scialfa’s harmony singing that at times resembles gospel, and how about Springsteen’s cool harmonica fill-ins? Here’s the official video.

I could not think of a better way to end this post than with Dion’s following comments about Stomping Ground, taken from the album’s notes, courtesy of YouTube: When I was young, I was always striving for accolades and admiration. Those were my goals. But when I reached them, they didn’t satisfy. I discovered joy when I learned to stop caring about all that – when I learned to relax and make music with friends… music that would make more friends for us through its joy. To make music with friends, and to make friends through music: I can’t imagine a better life than this. I am grateful to my friends who made Stomping Ground with me – and my new friends who are listening.

16 thoughts on “The Wanderer Stays On Blues Path”