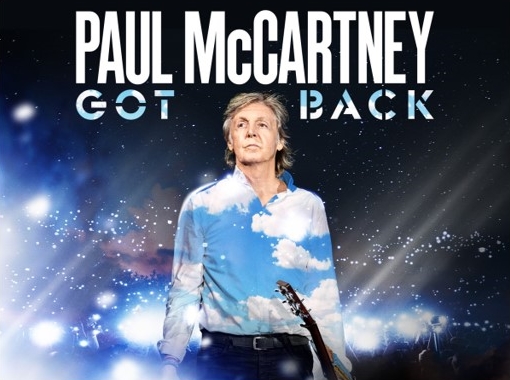 On Thursday night, Paul McCartney kicked off his North American Got Back Tour at Spokane Arena in Spokane, Wash. Apparently, it was a fabulous show with emotional tributes to John Lennon and George Harrison.

“Well, we said we’d come back, and we got back,” McCartney told the audience, according to this online piece by classic rock station Q104.3, which triggered this post. “And believe me,” he added, “We’re really happy to be back. I’m gonna take a moment for myself to drink it all in.” Who can blame Macca, after nearly three years of being off the road!

As time-stopped by local newspaper The Spokesman-Review, the gig lasted more than 2.5 hours. To me, it’s an indication that at nearly 80 years, Sir Paul still has remarkable fire in the belly to perform, something I’ve always loved about the man!

The regular set of 30 tracks and encore of six tunes featured many Beatles gems, as well as songs from Macca’s Wings and solo career. Following are two beautiful tributes to John and George, evidently captured by folks who were there.

First up is I’ve Got a Feeling. According to Rolling Stone, Get Back film director Peter Jackson had texted McCartney to let him know they can extract John’s voice, so he could sing the tune with his former bandmate. And that’s exactly what happened, together with video footage of John from the famous roof concert. Unfortunately, it’s only a snippet and the cameraman was shaken but not stirred. But, hey, we’ll take it, hoping it’s going to stay on YouTube.

McCartney also paid tribute to George with a beautiful rendition of Something, one of my favorite Harrison tunes off Abbey Road. Macca did so using a ukelele George had given him all those years ago. McCartney also included that version during a July 2016 show at Hersheypark Stadium in Hershey, Pa. I was fortunate to attend – the last time I saw him.

Yes, let’s be honest here, it’s quite obvious Paul’s voice is showing signs of wear and tear. But I still love the man and the joy he continues to get from performing. I’m going to be amazed when seeing him at MetLife Stadium in New Jersey on June 16, and that’s not a maybe!

Last but not least, here’s the setlist, as recorded by The Spokesman-Review:

9. “My Valentine” (with video featuring Natalie Portman and Johnny Depp)

22. “Something” (tribute to George Harrison)

25. “She Came in Through the Bathroom Window”

The current schedule for Macca’s Got Back Tour is here. On February 18, it was announced they had added a second date in Boston: June 8 at Fenway Park.