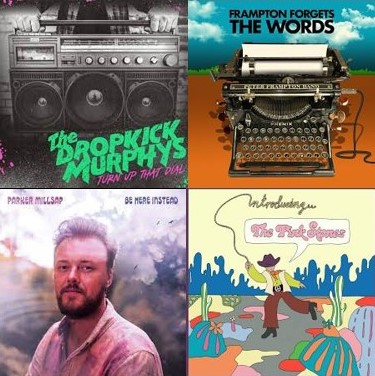 It’s Saturday and the new music show must go on! This installment of Best of What’s New includes two familiar names and two artists who are completely new to me, featuring Celtic punk, instrumental rock, pop and country rock. Nuff said – let’s get to some music!

Dropkick Murphys/Turn Up That Dial

Dropkick Murphys are a Celtic punk rock band formed in the Boston area in 1996. They are named after former pro wrestler Dr. John “Dropkick” Murphy, who also operated an rehab facility for alcoholics in Action, Mass. The band gained first attention when fellow Bostonian ska punk group The Mighty Mighty Bosstones invited them as opening act for their 1997 tour. Later that year, Dropkick Murphys got a deal with Hellcat Records, which was followed by their debut studio album Do or Die in January 1998. Fast-forward 23 years. The band’s present line-up, which has been together since 2008, consists of original co-founder Ken Casey (bass, lead vocals), along with Al Barr (lead vocals), Tim Brennan (lead guitar, accordion, mandolin, bouzouki, keyboards, piano, tin whistle, backing vocals), James Lynch (rhythm guitar, backing vocals), Jeff DaRosa (banjo, mandolin, bouzouki, guitar, keyboards, piano, harmonica, tin whistle, backing vocals) and Matt Kelly (drums, bodhran, backing vocals). Dropkick Murphys first entered my radar screen in 2013 when they teamed up with Bruce Springsteen to record a new version of their song Rose Tattoo. The single appeared in May that year in the wake of the Boston Marathon bombing – hard to believe it’s been eight years! Turn Up That Dial is the title track from Dropkick Murphys’ new album released yesterday (April 30).

Peter Frampton/Isn’t It a Pity

I trust Peter Frampton doesn’t need much of an introduction. The self-taught guitarist has been playing in bands since the age of 12. He first gained prominence in 1966 as a 16-year-old lead vocalist and guitarist in English rock band The Herd. In 1969, he co-founded Humble Pie together with Steve Marriott, frontman and guitarist of Small Faces. Frampton left Humble Pie in 1971 and launched a solo career. After four largely unnoticed studio albums, he got his big breakthrough with Frampton Comes Alive! The huge success led to an infamous shirtless photo on the cover of Rolling Stone, which turned Frampton into a teen idol and diminished his credibility as an artist. He continued to release albums but was unable to repeat the success of Frampton Comes Alive! In early 2019, Frampton announced his retirement from touring due to a progressive autoimmune disease causing muscle inflammation, weakness and atrophy, which eventually is going to impact his ability to play guitar. He launched a farewell tour in June that year. The UK leg, which had been slated for May 2020, was canceled because of you know what! Isn’t it a Pity is a track from Frampton’s new album of instrumental covers ingeniously titled Peter Frampton Forgets the Words and released on April 23. “This album is a collection of ten of my favorite pieces of music,” he stated on his website. My guitar is also a voice and I have always enjoyed playing my favorite vocal lines that we all know and love.” This is certainly a beautiful rendition of the George Harrison tune that originally appeared on his 1970 solo debut All Things Must Pass.

Parker Millsap is an American singer-songwriter from Purcell, OK. According to his profile on Apple Music, As a youth, Millsap alternately spent time singing hymns at his local Pentecostal church and saturating himself in old blues albums, which influenced his unique style along with folk, country, and vintage Elvis-flavored rock & roll. While still in his late teens, Millsap recorded his mostly acoustic debut, Palisade, with childhood friend Michael Rose accompanying him on double bass. Two years later in 2014, his self-titled second LP introduced his signature sound, bringing him national acclaim and leading to support slots with heavy-hitting roots acts like Jason Isbell, Old Crow Medicine Show, and Lake Street Dive. Millsap’s new album Be Here Instead, which is his fifth, came out on April 9. As is the case for most artists I feature in Best of What’s New, I’m completely new to his music. The Real Thing grabbed me right away. To me, it’s got a bit of a Paul McCartney vibe!

The Pink Stones/Put Me On

The last tune I’d like to call out here is Put Me On, a song by The Pink Stones, a country rock band from Athens, Ga. According to their website, the group revolves around Hunter Pinkston, a former punk rocker who discovered country in 2015 when listening to the B-side of the The Lemonheads’ rendition of Brass Buttons, which featured the original by Gram Parsons. This led him not only to explore Parsons’ catalog but also listen to similar other artists. In 2016, Pinkston who is from Albany, Ga. transferred to the University of Georgia in Athens for their music business program. He immersed himself into the local music scene and eventually met what became the core of The Pink Stones: Will Anderson (organ, piano, vocals), Logan Brammer (guitar, vocals), Adam Wayton (guitar, vocals) and Jack Colclough (drums). John Neff (pedal steel guitar), a founding member of Drive-By Truckers, is also part of the band’s current line-up. Put Me On, written by Pinkston, is a track from their debut album Introducing… the Pink Stones released on April 9. Check out this beautiful warm sound!