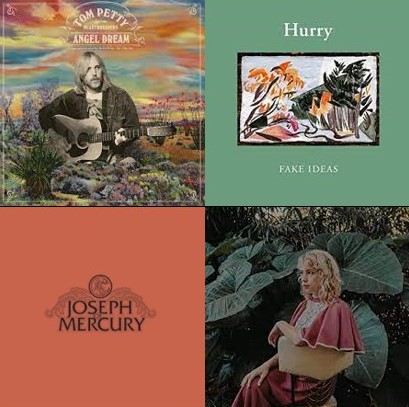 After a week with record temperatures in my neck of the woods and other parts of the U.S., it looks like central New Jersey is getting a bit of a break for the weekend, though by Tuesday and Wednesday, the temperatures are supposed to hit the ’90s again. I can’t believe July has arrived. To me it feels like we’re already in the middle of summer. What does any of this have to do with newly released music? Nothing, so let’s get to this week’s Best of What’s New installment!

Tom Petty and the Heartbreakers/105 Degrees

Until I checked Apple Music for new releases this week, I had no idea about the “new” album by Tom Petty and the Heartbreakers. Released yesterday (July 2), Angel Dream: Songs From The Motion Picture “She’s The One“, is what Petty’s website called a “reimagined reissue” to honor the 25th anniversary of Songs and Music from the Motion Picture “She’s the One”, the band’s ninth studio album that originally appeared in August 1996. As reported by NME, the remixed and remastered reissue adds four previously unreleased tracks and includes an extended version of Supernatural Radio. It also removes several tunes from the Wildflowers sessions that were included in the Wildflowers & All the Rest collection from last year. Here’s the nice rocker 105 Degrees (I guess we just can’t escape the high temperatures! 🙂 ), one of the previously unreleased tracks written by Tom Petty and the album’s lead single.

Hurry are an indie rock band from Philadelphia, originally started as a solo project by principal songwriter Matt Scottoline. According to his Apple Music profile, Scottoline, the bassist of Philly EMO band Everyone Everywhere, spent his free time writing and recording songs on his own, delving further into power pop and ’90s guitar rock than his main band ever did…In 2012, he released an eight-song self-titled record under the Hurry name, playing all the instruments himself. When Everyone Everywhere began to cut back on their schedule in the early 2010s, Scottoline decided to form an actual band, recruiting drummer Rob DeCarolis and a rotating cadre of friends on bass to play live shows. In addition to Scottoline and DeCarolis, the band’s current line-up includes DeCarolis’ brother Joe DeCarolis (bass) and Justin Fox (guitar). A Fake Idea is a melodic track from Hurry’s fourth and new studio album Fake Ideas that came out on June 25.

Joseph W. Salusbury, who performs as Joseph of Mercury, is a Canadian singer-songwriter and producer from Toronto. His profile on Apple Music notes he creates stylish, brooding pop that merges austere electronic habitats with emotive pop crooning. Initially making the rounds in 2013 under the name Joseph & the Mercurials, he scored a taste of success with the single “I Want What I Want.” Salusbury spent the next several years working behind the scenes, co-writing songs for artists like Majid Jordan and Illangelo, and racking up a number of production credits, all the while privately honing his own new material. Rebranded as Joseph of Mercury, he reemerged in February 2017 with “Without Words,” a song that unified his love of classic crooner pop and dreamy electronic-oriented production. Additional singles followed throughout the year, each building on this style. Pretenders is the opener of Mercury’s new EP Wave III released on June 25. Apparently, the groovy tune first appeared as a single on June 2019. Technically, this means it’s the EP that’s new, not the song, so I’m cheating a little bit here.

K.C. Jones is a singer-songwriter from Lafayette, La. According to her website, Jones’ influences include “everything from classic country to psychedelic rock to contemporary indie roots singer-songwriters.” Jones’ bio also acknowledges her love of late 60s/early 70s rock. Beginnings and Ends is the first track of Jones’ debut studio album Queen of the in Between, which came out on June 18. Her backing band is made up of musicians from the local Lafayette scene, featuring Chris Stafford (pedal steel, guitars, keys, vocals), Trey Boudreaux (bass) and Jim Kolacek (drums, percussion). The album was produced by Joel Savoy, a notable Cajun musician. Beginnings and Ends has a cool sound, which includes what the website calls a “signature psych-twang baritone guitar sound throughout, sprinklings of Hammond B3 organ, even fuzzed-out, garage rock-esque guitar lines” – I couldn’t have said it any better! 🙂