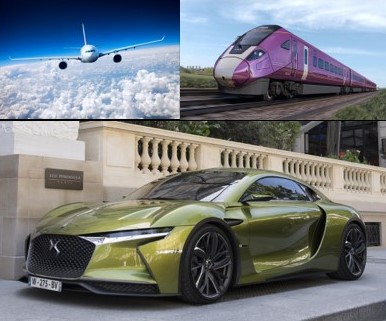 The other day, the 1987 American comedy picture Planes, Trains and Automobiles randomly came to my mind. It’s about a marketing executive (Steve Martin) and a sweet but annoying traveling sales guy (John Candy) ending up together as they are trying to get from New York home to Chicago for Thanksgiving. Their plane’s diversion to Wichita due to bad weather in Chicago starts a three-day odyssey and one misadventure after the other, while the two, seemingly incompatible men use different modes of transportation to get to their destination.

What does this movie have to do with music? Nothing, except it gave me the idea to put together lists of songs that are related to – you guessed it – planes, trains and automobiles. To be fully transparent, in mid-2017, I published tw0 posts with songs for the road and songs for the train. As such, the theme isn’t really new but, hey, it’s been almost four years. Plus, I feel it’s okay to repeat fun ideas every now and then.

In order to avoid creating what would be a rather lengthy post, I decided to make it a mini series and break things up in three parts, with each featuring five tracks listed in chronological order. Here’s part I: Songs related to planes, an entirely new idea! 🙂

Jefferson Airplane/Blues From an Airplane

Blues From an Airplane is the opener of Jefferson Airplane’s debut album Jefferson Airplane Takes Off from August 1966. The psychedelic rock tune was co-written by Marty Balin and Skip Spence, Airplane’s lead vocalist/rhythm guitarist and drummer, respectively. The tune also became the b-side of the band’s second single Come Up the Years, which was released ahead of the album in May 1966. Airplane’s actual was take-off, Surrealistic Pillow, was still six months away. The record only reached no. 128 on the Billboard 200, while the single failed to chart altogether.

The Beatles/Back in the U.S.S.R.

Why Back in the U.S.S.R., given the tune doesn’t have “plane” or a related word in the title? Since it’s my bloody list, and it cannot be without my favorite band of all time. Plus, there’s a sound of a jet engine in the beginning and at the very end of the tune, and the first verse prominently includes a rough flight. Written by Paul McCartney and credited to John Lennon and him as usual, is actually a parody to Back in the U.S.A. and California Girls by Chuck Berry and The Beach Boys, respectively, poking fun at their patriotic sentiments about the U.S. The song, included on The White Album from November 1968, was recorded without Ringo Starr who temporarily had left the group after McCartney had criticized his drumming. Instead John, Paul and George Harrison created a composite drum track from numerous takes.

Jet Airliner was one of the first tunes that came to my mind when thinking about plane songs. The other two were Jet by Paul McCartney and Wings and John Denver’s Leaving on a Jet Plane. Since I decided to include Back in the U.S.S.R., I skipped Jet. While Leaving on a Jet Plane is a lovely tune, it would have been another pick from the ’60s. Written by Paul Penna in 1973, Jet Airliner was popularized by Steve Miller Band when they released it in April 1977 as the lead single of their 10th studio album Book of Dreams that appeared the following month. It yielded their fourth and last ’70s top 10 hit on the U.S. mainstream chart.

After three rockers I thought it was time to include something that’s a bit lighter, so I’m glad I found this lovely acoustic, folk-oriented tune by Indigo Girls. Written by Emily Saliers, who together with Amy Ray makes up the duo, Airplane is from their fourth studio album Rites of Passage that appeared in May 1992. I really dig the vocals and the harmony singing on this song.

There they are again, The Black Keys. The rock duo of Dan Auerbach and Patrick Carney entered my radar screen recently when I included a tune from their new album Crawling Kingsnake in a Best of What’s New feature. Aeroplane Blues is another edgy blues rock tune, which shall wrap up this first installment. Written by Auerbach and Carney, it appeared on their third studio album Rubber Factory released in September 2004.

Today could be a first, or in case I’m wrong, it’s safe to say this doesn’t happen often: Two major reissues of albums by iconic music artists appearing the same day. The White Album by The Beatles and Electric Ladyland by the Jimi Hendrix Experience are now officially out. Other than what’s currently available in Apple Music I don’t have access to any of the actual special releases at this time, yet I’d feel remiss not write about these special editions.

While the White Album isn’t my favorite Beatles album and I tend to agree with those who say they should have put the strongest songs on one record rather than releasing a double album, The Beatles remain my all-time favorite band. That’s likely not going to change. Moreover, based on what I’ve read and heard, this reissue definitely features material that intrigues me. As for Jimi Hendrix, Electric Ladyland would be my no. one album choice overall, even though it doesn’t include my two favorite Hendrix tunes: Purple Haze and Hey Joe.

The White Album reissue is available in four configurations: A Super Deluxe 7-disc set (on the left in above picture) featuring 50 mostly previously unreleased recordings all newly mixed with 5.1 surround audio as well as the so-called Esher Demos; a deluxe 4-LP edition; a 2-LP issue (pictured above in the middle); and a deluxe 3-CD set (on the right in the above image). The remixed original tracks, the Esher Demos and additional takes are also available on iTunes/Apple Music and other digital and streaming services.

Similar to last year’s Sgt. Pepper’s Lonely Hearts Club Band anniversary edition, Giles Martin, son of Beatles producer George Martin, worked together with mix engineer Sam Okell. They newly mixed the album’s 30 original tracks in stereo and 5.1 surround audio, together with 27 early acoustic demos and 50 session takes, most of which weren’t released in any form previously. While I have no doubt the sound is fantastic and superior to previous recordings, for the most part I can’t hear the differences. That’s largely because the streaming versions are lower quality than the CDs or vinyl records. And, yes, part of it may also be explained by some hearing loss I can’t deny! Here’s a cool lyric video of the 2018 mix of Back In The U.S.S.R.

Given the above mentioned sound quality constraints, what’s more intriguing to me, are the additional demo and session tracks, particularly the Esher Demos that were recorded in May 1968 at George Harrison’s bungalow in Esher located to the southwest of London. These are early and unplugged versions of most of the original album tracks, along with a few additional songs that didn’t make the album.

Two of the tunes that weren’t included on the White Album, Mean Mr. Mustard and Polythene Pam, ended up on Abbey Road. Not Guilty, a Harrison composition, was eventually released on his eponymous studio album from February 1979, his eighth studio record. And then there’s John Lennon’s Child Of Nature, which became Jealous Guy and was included on Lennon’s second solo album Imagine from September 1971 – admittedly stuff that is likely to primarily excite Beatles fans like myself.

Two things are very striking to me about these Esher Demos. The amount of writing was just remarkable during a time when tensions among The Beatles were increasing, which even led to Ringo Starr’s temporary departure. But despite their differences, somehow these guys were still able to engage as a band. They even has some fun, as background chatter on some of these home recordings suggests. Here’s the Esher Demo of Ob-La-Di, Ob-La-Da. While it’s clearly not my favorite Beatles tune, does this sound to you like a band in distress? 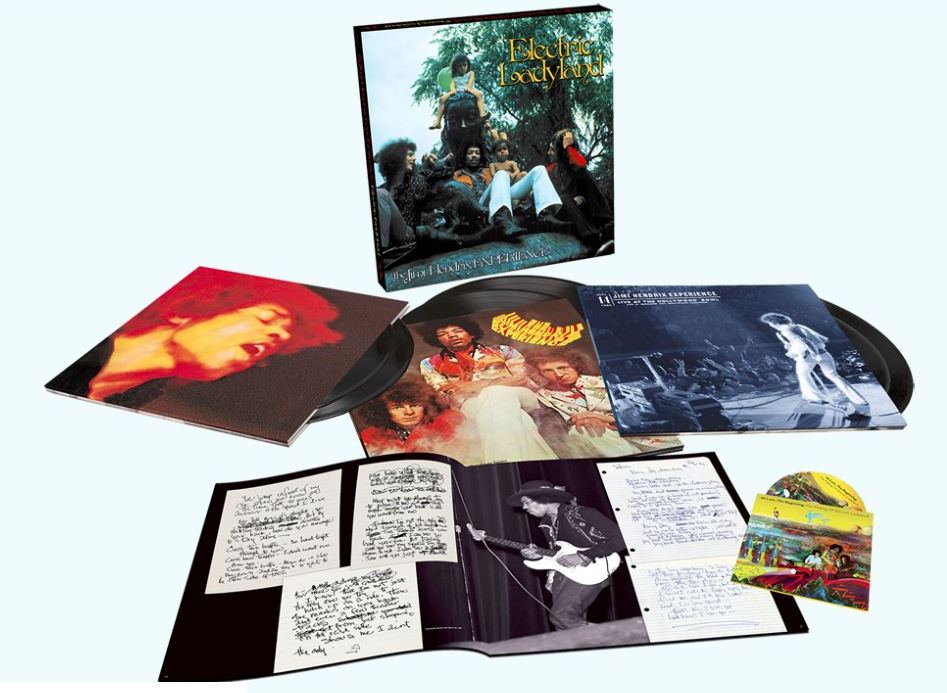 CD mastering and the 5.1 surround sound mix were done by Eddie Kramer, sound engineer on all Hendrix albums released during his lifetime. Vinyl mastering was done by Bernie Grundman, who has mastered albums, such as Aja (Steely Dan), Thriller (Michael Jackson) and various Prince records.

Similar to Abbey Road, which couldn’t have been more different from Sgt. Pepper’s Lonely Hearts Club Band, Electric Ladyland marked a significant change for Jimi Hendrix. Unlike the first two albums by the Jimi Hendrix Experience, where producer Chas Chandler tightly managed the recording process, Hendrix was fully in charge on Electric Ladyland. Recording sessions were no longer determined by Chandler’s tight organization and time management, but by Hendrix’s unconstrained perfectionism. Hendrix also repeatedly invited friends and guests to join him in the studio, such Brian Jones (still with The Rolling Stones at the time), Steve Winwood and Al Kooper. This created oftentimes chaotic recording conditions, which eventually led to Chandler to walk out on Hendrix.

Except for some tracks from the documentary At Last … The Beginning, currently, nothing else from the Electric Ladyland reissue is available on iTunes or Apple Music. I suspect it is similar for other digital or streaming platforms. That’s unfortunate and I assume done by design to encourage purchases of the actual box set. Probably for the same reason, I also couldn’t find any YouTube clips of songs from the reissue. The CD version currently sells for $42.39 on Amazon, while the vinyl configuration is going for $98.39. Here’s a fun clip of Eddie Kramer talking about Electric Ladyland and the new box set.

Sir Paul turned 75 today and he is not slowing down 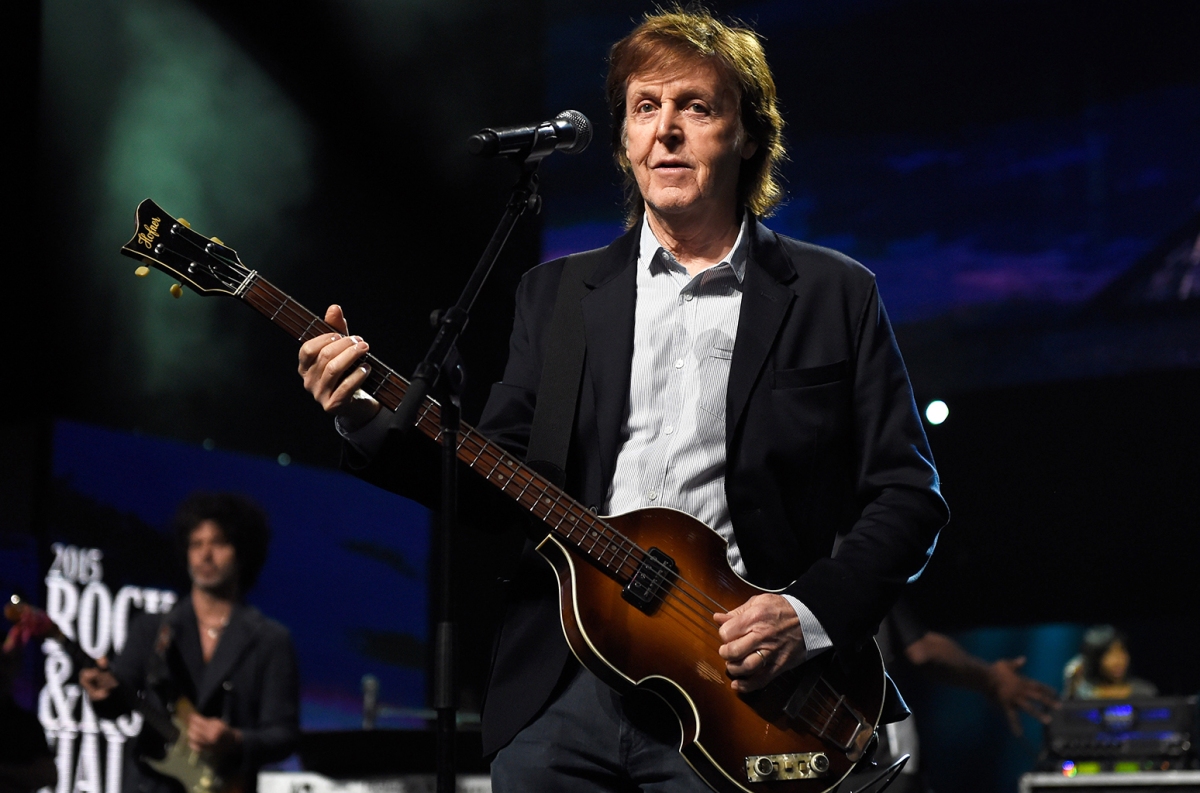 To those who read this blog or know me otherwise, it shouldn’t come as a big surprise that Paul McCartney is one of my all-time favorite music artists. Today, Sir Paul is celebrating his 75th birthday, and I sure hope he’s gonna have a good time.

James Paul McCartney was born in the middle of World War II on June 18, 1942 at Walton Hospital in Liverpool, England. His mother was Mary Patricia, who was a nurse at that hospital. And, by the way, that’s the mother Mary (not the Virgin Mary), who inspired the lyrics of one of McCartney’s most beautiful ballads:

“When I find myself in times of trouble/Mother Mary comes to me/Speaking words of wisdom, let it be.”

His father James “Jim” McCartney couldn’t witness his son’s birth, since he was working as a volunteer firefighter during the war. While I know that Penny Lane, one of my other favorite McCartney tunes, reflects childhood memories, I haven’t found any references that suggest the fireman referenced in the song was inspired by Sir Paul’s father.

Fast-forward to July 6, 1957. That was the day McCartney met John Lennon for the first time. It was at a performance of John’s high school band The Quarrymen. The encounter would start a working relationship between the two that would change music history forever.

I could continue to recount McCartney’s history, but it has been told many times and, it’s also safe assume, by people who know much more about it than I do. So instead of an additional attempt to create yet another write-up, I’d like to celebrate Sir Paul’s birthday with a selection of his music over the past 50-plus years. Let me repeat this: 50-plus years – wow!

While like many other Beatles songs Birthday was officially credited to Lennon-McCartney and, according to The Beatles Bible, there are different accounts whether McCartney wrote it or whether it was indeed a co-write with Lennon, it simply feels right to end the post with it.

I also decided to take a clip that was captured during McCartney’s ongoing One on One World Tour. Last July, I was fortunate enough to catch one of the tour’s shows. More on that amazing concert is here. Once again, happy birthday, Sir Paul, and rock on!