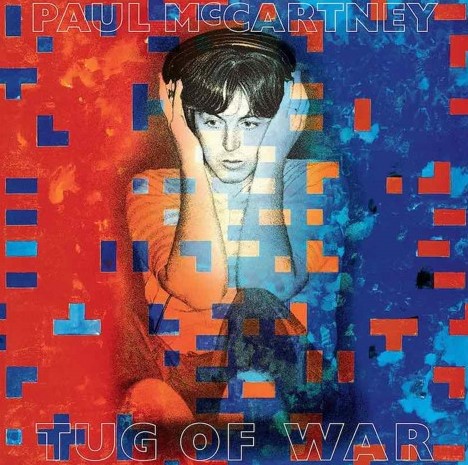 As a huge fan of The Beatles and Paul McCartney, I was really excited when Tug of War was released in April 1982. Catching Take It Away on the radio yesterday prompted me to revisit McCartney’s third solo album, which I had not listened to for many years. It turned out I still dig it, though not for the primary reason that initially attracted me back then: Ebony and Ivory, a smash hit in Germany, as well as many other countries.

While McCartney’s duet with Stevie Wonder isn’t a bad tune, I think it’s fair to say both artists have written better songs. One also must remember the ’80s were a time period when high profile duets were very much en vogue. I still like the ballad’s message, as well as the idea to use the black and white keys on a keyboard as a metaphor for perfect harmony – sadly a state of affairs that nowadays seems to be more elusive than ever.

No matter how you feel about it, Ebony and Ivory was the big hit single from Tug of War, which came out about a month prior to the album. I have to say I wasn’t particular impressed with McCartney II and that record’s hit single Coming Up, even though both had impressive chart success as well. I thought Tug of War was a far superior album. I think I still do but like to caveat the statement by adding that I haven’t listened to McCartney II in a long time.

Tug of War was McCartney’s first album after the breakup of Wings. It also was his first record following the murder of John Lennon on December 8, 1980, which not only impacted the record’s timing but also its content. Initially, McCartney’s plan was to make another album with Wings, but then things changed.

While apparently he had grown weary about continuing his band, McCartney started rehearsing songs with them in October 1980. He brought in George Martin as producer, but they both felt McCartney’s latest compositions weren’t a good fit for Wings and decided to pursue a record without the band.

The project was paused for two months after Lennon had been killed. In February 1981, work on the album resumed. Between February 3rd and March 2nd, recording sessions took place in the Caribbean at AIR Studios in Montserrat, which included Wonder, bassist Stanley Clarke, Carl Perkins and Ringo Starr.

Additional sessions at Martin’s AIR Studios in London followed over the summer. They also yielded songs McCartney would use for Pipes of Peace, the follow on to Tug of War from October 1983. Apparently, McCartney and Martin weren’t in a huge hurry and used the remainder of 1981 to put the finishing touches on the record. Time for some music!

I’d like to kick things off with the above noted Take It Away. Like all other tracks on the album except for one tune, it was written by McCartney. In June 1982, Take It Away also was released separately as Tug of War’s second single. While it charted in many countries, including the UK and the U.S. where it climbed to no. 15 and 10, respectively, the power pop tune didn’t match the success of Ebony and Ivory. It features Ringo Starr on drums, George Martin on piano and 10cc’s Eric Stewart on backing vocals. Take it away, boys!

In addition to Ebony and Ivory, Tug of War included a second duet with Stevie Wonder: What’s That You’re Doing. Apart from providing vocals, Wonder also co-wrote the funky tune with McCartney. In fact, to me it sounds more like a Stevie Wonder song. Stewart made another appearance on backing vocals.

Here Today is a moving tribute to John Lennon, which can still make me emotional. It may not be quite as compelling as Elton John’s Empty Garden, but I still find it beautiful. When I saw McCartney live last time in July 2016, he performed the tune solo with just his acoustic guitar – a quite powerful moment!

The last track I’d like to call out is McCartney’s great duet with Carl Perkins, Get It. I love the tune’s rockabilly retro vibe and Perkins’s electric guitar work, which he provided in addition to vocals. You can also literally feel the fun they had when recording the track, and it’s not only because of Perkins’ laughter at the end.

The final words of this post shall belong to Paul McCartney. “I think, you know, with my songs, I have my own approach,” he told Andy Mackay in an in-depth interview about the album in August 1982, which is transcribed on fan website The Paul McCartney Project. “I’ll tell you the way I see it: the thing I like about my stuff, when I like it, is that the listener can take it the wrong way, it may apply to them, you know.”