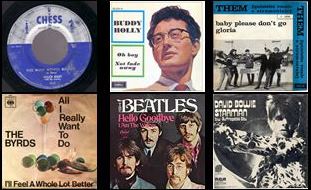 While I suspect most folks can tell an anecdote where they feel a teacher or professor did them wrong, you probably figured this post isn’t about academic grades, though it is somewhat related to grading. I’m talking about the good old-fashioned single from the last Century. Yep, it’s hard to believe that in the age of online streaming and digital downloads there was once was a time when music artists would release singles on vinyl and people would actually buy them!

The most common format of the vinyl single was the 7-inch 45 rpm, which according to Wikipedia was introduced by RCA Victor in March 1949 as a more durable and higher-fidelity replacement for 78 rpm shellac discs. Historically, singles had an A-side and a B-side, and placing a song on the A-side implied it was better than the tune on the flip side. In December 1965, The Beatles disrupted this tradition when they released the first so-called double-A side: We Can Work It Out and Day Tripper. The 70s saw yet another type called double-B, where you had one song on the A-side and two tunes on the B-side. Also known as maxi singles, the initial format was 7 inches and, starting from the mid-70s, 12 inches.

Do singles even matter you might ask. At the end of the day, it’s all music, so who cares how it’s called. Well, I guess I’m a bit of a music nerd, so I get excited about it. That being said, I never got much into buying 45 rpms myself. In retrospect, that’s a good thing, since the handful I ended up were all pretty awful.  Three I can still remember include I Was Made For Loving You (Kiss), Heart of Glass (Blondie) and How Could This Go Wrong (Exile) – indeed, how could things have gone so wrong? Well, to my defense it was the disco era and, perhaps more significantly, I was like 12 or 13 years old and slightly less mature!:-)

Before I go any further with this post, I have to give credit where credit is due. The initial inspiration for the topic came from a story on Ultimate Classic Rock about B-sides that became big hits. Then I also remembered that fellow blogger Aphoristic Album Reviews has a recurring feature called Great B-sides. Both together made me curious to do some research and there you have it: a playlist of tunes that initially were released as B-sides, which in my opinion would have deserved an A-side placement or perhaps double-A side status. This doesn’t necessarily mean I feel the corresponding A-sides were inferior. With that being said, let’s get to it!

What better artist to kick off a rock playlist than with Mr. Rock & Roll, Chuck Berry. In September 1956, he released Brown Eyed Handsome Man, a single from his debut album After School Session. The B-side was Too Much Monkey Business, which I personally prefer over the A-side. Both tunes were written by Berry. Like many of his songs, Too Much Monkey Business was widely covered by others like The Beatles, The Kinks and The Yardbirds. Naming them all would be, well, too much monkey business!

Another 1950s artist I dig is Buddy Holly, a true rock & roll and guitar pioneer who during his short recording career released such amazing music. Here’s Not Fade Away, the B-side to Oh, Boy!, a single that appeared in October 1957 under the name of Holly’s band The Crickets. Not Fade Away was credited to Charles Hardin, Holly’s real name, and Norman Petty. In February 1964, The Rolling Stones released a great cover of the tune, their first U.S. single and one of their first hits.

In November 1964, Them fronted by 19-year-old Van Morrison released a cover of Baby, Please Don’t Go, a traditional that had first been popularized by delta blues artist Big Joe Williams in 1935. While Them’s take was a great rendition, it was the B-side, Morrison’s Gloria, which became the band’s first hit, peaking at no. 10 on the British singles charts. Following the song’s big success, apparently, Gloria was re-released as a single in 1965, with the garage rocker getting its well-deserved A-side placement. G.L.O.R.I.A., Gloria, G.L.O.R.I.A., Gloria – love this tune!

Another great B-side is I’ll Feel A Lot Better by The Byrds, which they put on the flip side of their second single All I Really Want To Do from June 1965. It was written by founding member Gene Clark, the band’s main writer of original songs between 1964 and early 1966. Like the Bob Dylan tune All I Really Want To Do, I’ll Feel A Lot Better appeared on The Byrds’ debut album Mr. Tambourine Man. I’m a huge fan of Roger McGuinn’s Rickenbacker jingle-jangle guitar sound. Another reason I’ve always liked The Byrds is because of their great harmony singing. It’s the kind of true music craftsmanship you hardly hear any longer these days.

My next selection won’t come as a shock to frequent readers of the blog: I’m The Walrus by The Beatles. Other than the fact that The Fab Four are my all-time favorite band, there’s another valid reason I included them in this playlist. You can file this one under ‘what were they thinking relegating the tune to the B-side and giving the A-side to Hello Goodbye.’ Hello? According to The Beatles Bible, not only was John Lennon’s push to make Walrus the A-side overturned by Paul McCartney and George Martin, who both felt Hello Goodbye would be more commercially successful, but it created real resentment from Lennon. And frankly who can blame him! After the band’s breakup, he complained “I got sick and tired of being Paul’s backup band.” Yes, Hello Goodbye ended up peaking at no. 1 but also as one of the worst Beatles singles!

Next up: Born On The Bayou by Creedence Clearwater Revival, the B-side to Proud Mary, a single released in January 1969. Unlike the previous case, I think this is a great example of two killer tunes that are each A-side material. Written by John Fogerty, both songs appeared on CCR’s second studio album Bayou Country that also came out in January 1969.

In October 1969, Led Zeppelin issued Led Zeppelin II, only nine months after their debut, and one of their best albums, in my opinion. The opening track Whole Lotta Love was released as a single in November that year. The B-side was Living Loving Maid (She’s Just A Woman). It may not be quite on par with Whole Lotta Love, but it sure as heck is an excellent tune with a great riff. The song was co-written by Jimmy Page and Robert Plant.

The Needle And The Damage Done is one of my favorite songs from one of my all-time favorite artists: Neil Young. It became the B-side to Old Man, which Young released as a single in April 1972 off Harvest, his excellent fourth studio album that had appeared in February that year.

Also in April 1972, David Bowie came out with Starman, the lead single from The Rise and Fall of Ziggy Stardust and the Spiders from Mars, his fifth studio album and my favorite Bowie record. The B-side was Suffragette City, a kick-ass glam rocker. Like all tracks on Ziggy Stardust, it was written by Bowie.

Of course, this playlist wouldn’t be complete without featuring a tune from one of my other all-time favorite bands, The Rolling Stones. I decided to go with When The Whip Comes Down, the B-side to Beast Of Burden, which was released as a single in September 1978. As usually co-written by Mick Jagger and Keith Richards, both tunes appeared on Some Girls, the Stones’ 14th British and 16th U.S. studio album from June that year. That’s according to Wikipedia – I didn’t count them myself!