A playlist of country-influenced songs by The Rolling Stones

With the recent passing of Charlie Watts, The Rolling Stones have been on my mind lately. When my streaming music provider served up Far Away Eyes the other day, the seed for this post was planted. In addition to rock & roll and blues, the “greatest rock & roll band in the world” has always had a thing for country, so I thought it would be fun to put together a list of country-influenced Stones songs.

“As far as country music was concerned, we used to play country songs, but we’d never record them – or we recorded them but never released them,” Mick Jagger is quoted on Songfacts. “Keith and I had been playing Johnny Cash records and listening to the Everly Brothers – who were SO country – since we were kids. I used to love country music even before I met Keith. I loved George Jones and really fast, s–t-kicking country music, though I didn’t really like the maudlin songs too much.” For all of those among us who aren’t native English speakers like myself, maudlin means “drunk enough to be emotionally silly” and “weakly and effusively sentimental,” as defined by the Merriam-Webster dictionary.

All featured tracks in this list were credited to Jagger and Keith Richards, as usual. One could argue most picks aren’t “pure” country and mix in elements from blues and other genres. While I suppose there isn’t much debate that a tune like I’m So Lonesome I Could Cry qualifies as maudlin, it’s really hard to define what is a pure country song in the first place. After all, with all the crossover action that has been going on in country for many years, I would argue the genre has become one of the broadest in music. Should we be shattered? Does it matter?

Let’s kick off this list with Dear Doctor from Beggars Banquet. The tune featured Brian Jones on harmonica and slide guitar. Sadly, Beggars Banquet was the last Stones album that appeared during his lifetime. “The country songs, like “Factory Girl” or “Dear Doctor” on Beggars Banquet were really pastiche,” Jagger said. “There’s a sense of humor in country music, anyway, a way of looking at life in a humorous kind of way – and I think we were just acknowledging that element of the music.” The Stones clearly seemed to have fun with Dear Doctor.

Country Honk is the country version of Honky Tonk Women. “On Let It Bleed, we put that other version of ‘Honky Tonk Women’ on because that’s how the song was originally written, as a real Hank Williams/Jimmie Rodgers, ’30s country song,” Richards explained, as captured by Songfacts. “And it got turned around to this other song by Mick Taylor, who got into a completely different feel, throwing it off the wall completely.” Wikipedia notes the fiddle was played by Byron Berline in a park, who by his own account had been recommended for the part by Gram Parsons.

Dead Flowers, the tune every bar band must know how to play, perhaps is the most famous country-influenced song by the Stones. I’ve really come to love it over the years. The guitar fill-ins by Richards and Taylor are among the very best the Stones have ever played, in my humble opinion. Here’s another quote from Jagger Songfacts provides in connection with this tune: “I love country music, but I find it very hard to take it seriously. I also think a lot of country music is sung with the tongue in cheek, so I do it tongue-in-cheek. The harmonic thing is very different from the blues. It doesn’t bend notes in the same way, so I suppose it’s very English, really. Even though it’s been very Americanized, it feels very close to me, to my roots, so to speak.”

Another country-influenced Stones gem is Sweet Virginia, off what many fans regard as the band’s best album, Exile on Main St. Among others, the track features great harmonica and saxophone parts by Jagger and Bobby Keys, respectively. The backing vocalists include Dr. John. “‘Sweet Virginia’ – were held over from Sticky Fingers,” Richards said in 2003, per Songfacts. “It was the same lineup and I’ve always felt those two albums kind of fold into each other… there was not much time between them and I think it was all flying out of the same kind of energy.” Okay, let’s scrape that s–t right off our shoes! 🙂

Obviously, I can’t skip the tune that triggered the brilliant idea for this post. In addition to being included on Some Girls, Far Away Eyes became the B-side to the album’s lead single Miss You. Referring to a 1978 interview with Rolling Stone, Songfacts includes the following quote by Jagger: “You know, when you drive through Bakersfield [Calif. – CMM] on a Sunday morning or Sunday evening, all the country music radio stations start broadcasting black gospel services live from LA. And that’s what the song refers to.” During that same interview, Jagger also confirmed that the girl in the song was “a real girl.” Well, that’s a shocker!

Let’s finish this post with The Worst, one of two tunes from Voodoo Lounge Keith Richards sang. Among others, the track features Chuck Leavell on piano and fiddle and flute player Frankie Gavin, a member of De Danaan, a traditional folk group from Ireland where the Stones recorded the album. “It’s funny, but a lot of these songs were written in kitchens,” said Richards in 1994, according to Songfacts. “That one I wrote in the kitchen in Barbados, and I thought, That’s a pretty melody, but what to do with it, I really didn’t know. I guess that’s where Ireland comes in, because Ireland has its own traditional music, and it’s not country music as such, but it’s the roots of it, you know? It’s that Irish feel.” Pirate laughter – okay, I made that up, but I could just picture him do it! 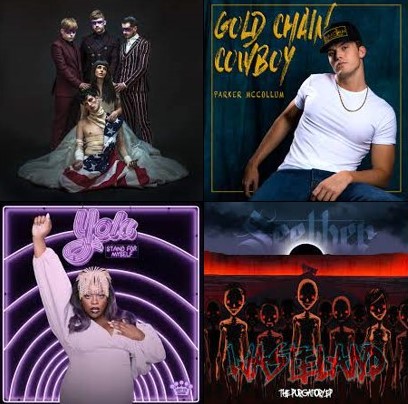 I can’t believe it’s already been another week since the last Best of What’s New and that we’re at the end of July. This installment of my recurring new music feature includes an English goth punk-influenced rock group, a South African-turned-U.S. post grunge band, as well as an Americana singer-songwriter and a British retro soul artist who are both based in Nashville. All songs appeared on releases that came out yesterday (July 30).

Creeper are an English rock band from Southampton. Apple Music describes them as a versatile English goth-punk unit that draws inspiration from a deep well of post-punk, emo, and glam rock…Creeper was founded in 2014 by vocalist Will Gould, guitarists Ian Miles and Oliver Burdett, bassist Sean Scott, drummer Dan Bratton, and keyboardist Hannah Greenwood. They issued their eponymous debut EP shortly after formation, and in 2015 they inked a deal with Roadrunner Records and put out a second EP, The Callous Heart…A third EP, The Stranger, dropped the following year, and in 2017, Creeper unleashed their full-length debut, the well-received Eternity, In Your Arms. After seemingly announcing their breakup in 2018, the band unexpectedly returned a year later. In 2020 they unleashed their second album, the grandiosely titled Sex, Death & The Infinite Void. Yesterday, Creeper’s fourth EP American Noir appeared. Here’s Midnight, a melodic rocker co-written by Greenwood, Miles and Gould.

Next up is Parker McCollum, a Nashville-based Americana singer-songwriter. While growing up in the Houston area, McCollum listened to artists like Willie Nelson, Buck Owens, Bob Dylan, Townes Van Zandt and Steve Earle. At age 13, he started playing the guitar and began writing his own songs. When he was 16, McCollum was performing at local venues. After his high school graduation, he moved to Austin. While starting to attend college there, he continued to perform. In June 2013, McCollum released his debut single Highway. His debut album Limestone Kid followed in February 2015. In June 2019, he signed with MCA Nashville. That label just issued his third and new album Gold Chain Cowboy. Here’s the opener Wait Outside co-written by him, Randy Rogers and producer Jon Randall – great sound and check out that slide guitar!

British singer-songwriter Yola, born Yolanda Quartey, first entered my radar screen last October when I included her then-latest single Hold On in a previous Best of What’s New installment. Her powerful voice immediately grabbed my attention and subsequently led to the review of her compelling first full-length solo album Walk Through Fire from February 2019. Following a tough childhood characterized by poverty, and a period during which she was homeless, Yola managed to establish herself as a session singer in England. In 2005, she co-founded country-soul band Phantom Limb and recorded two studio albums and a live record with them. After the group dissolved and a hiatus, Yola launched her solo career and released a well received debut solo EP, Orphan Offering. Eventually, she came to the U.S. and met Dan Auerbach who produced her above noted first full length album. Barely Alive is the opener of Yola’s new sophomore release Stand For Myself that was produced by Auerbach as well. Together with Joy Oladokun, he also co-wrote the tune with her. If you’re new to Yola and like retro ’70s style soul, check her out. I can hear a bit of Roberta Flack in her voice.

Seether are a post-grunge rock band founded as Saron Gas in Pretoria, South Africa in 1999. Their debut album Fragile came out in October 2000 on Johannesburg-based independent label Musketeer Records. After it came to the attention of American label Wind-up Records, they signed them, and the band relocated to the U.S. Due to the similarity to sarin gas, they were told to change their name, so they decided to call themselves Seether, after the song by American alternative rock band Veruca Salt, one of their influences. Another one is Nirvana. Their first U.S. album Disclaimer was released in August 2002. Seven additional albums and six EPs have since appeared, including their new EP Wasteland-The Purgatory. Seether’s current line-up includes original member Shaun Morgan (lead vocals, guitar, piano), together with Corey Lowery (lead guitar, backing vocals), Dale Stewart (bass, guitar, backing vocals) and John Humphrey (drums, percussion). Here’s Wasteland written by Morgan.