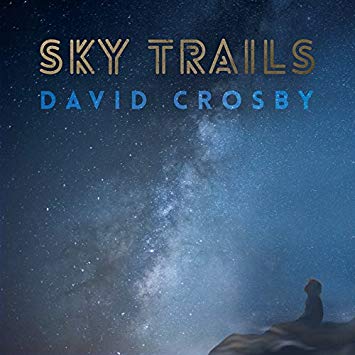 As somebody who considers Crosby, Stills, Nash & Young to be one of the best vocal harmony bands, you’d think I’d pay more attention to their individual members. With the exception of Neil Young, I guess I simply accepted that the sum is more than the parts. Even if that’s oftentimes true when it comes to top-notch bands, ignoring the parts can mean missing out on great music. Case in point: David Crosby and his album Sky Trails from September 2017, which is only his sixth solo record – pretty remarkable for an artist who released his solo debut in Feb 1971.

With David Crosby having been a founding member of The Byrds and Crosby, Still & Nash (CSN), and CSN having been active on and off between 1968 and 2015 – sometimes with, most of the time without Neil Young – I think it’s fair to say most people associate Crosby with the aforementioned bands. But, as noted above, he has released various solo albums. Sky Trails recently popped up as a listening suggestion in my streaming music platform. I’ve since listened a few times to the album and have to say I really dig it. I was also surprised how jazzy it is. I guess I had expected something more folk rock-oriented.

Let’s get to some music and kick it off with the opener She’s Got To Be Somewhere. This Steely Dan style tune is my favorite on the album. It was written by James Raymond, who produced the record, played keyboards, and, it turns out, is Crosby’s son – one of his four kids, not counting the two children born to Melissa Etheridge via artificial insemination.  Commenting on the tune, Crosby says on his website, “We didn’t consciously do that. We just naturally go to a place where Donald [Fagen] goes. I loved Steely Dan right from the first notes I heard.” Well, the man has good taste!

The album’s dreamy title track was co-written by Crosby with American singer-songwriter and guitarist Becca Stevens. The tune reminds me a bit of music I’ve heard by Clannad. Admittedly, it’s been a long time I’ve listened to the Irish folk band, and it would probably be worthwhile revisiting them. The saxophone fill-ins add a dose of jazz to the tune. “She’s a stunning, amazing singer and a great writer,” Crosby says of Stevens. “I’d rather be in a band with her than almost anybody.”

Here It’s Almost Sunset is a track co-written by Crosby and Mai Agan, an Estonian bass player and composer. It’s another tune on the quieter side. Most tracks on the album are. Again, there are nice saxophone accents. Wikipedia lists three saxophonists who supported the recording, Chris Bullock, Jeff Coffin and Steve Tavaglione, but unfortunately does not reveal who played on which song. Neither do the YouTube clips, which only list the aforementioned core musicians.

Capitol is a protest song co-written by Crosby and Raymond, expressing their less than flattering opinion about legislators: …And you think to yourself/This is where it happens/They run the whole damn thing from here/Money just burns, filling up their pockets/Where no one can see/And no can hear… Sadly, these words seem to ring true more than ever in this country these days.

The last tune I’d like to highlight is called Curved Air. It’s another co-write by Crosby and Raymond. The flamenco guitar sounded was created by Raymond using keyboards. “Hell no, I can’t play like that,” Crosby comments on the track that examines life’s contradictions.  “It’s James on keyboard. So is the bass. It’s the only time I’ve ever heard anybody write singer/songwriter music with flamenco playing.”

In addition to Raymond, Agan and Tavaglione, the core musicians on the album include Jeff Pevar (guitar), British-born, Canadian-raised singer-songwriter Michelle Willis (keyboards, vocals) and Steve DiStanislao (drums). “All the people in the Sky Trails band are much younger than me, so I have to paddle faster to keep up,” Crosby says with a laugh. This was not the first time he had played with them. Between 1996 and 2004, Crosby performed with Raymond and Prevar in the jazz rock band CPR, or Crosby, Prevar & Raymond. DiStanislao and Tavaglione played on CPR albums as well.

David Crosby, who turned 78 years in August, is still going strong. His most recent studio album Here If You Listen appeared in October last year. With four of his seven solo albums having been released since 2014, it appears Crosby is on some sort of late-career surge. He also continues to tour. In fact, he’s currently on the road in the U.S., with confirmed dates until September 17. The tour schedule is here.

There is also a new documentary, David Crosby: Remember My Name. Released on July 19, the film was directed by A.J. Eaton and produced by Cameron Crowe, who has known Crosby for many years. Based on the trailer, the film looks intriguing, and I’m going to watch it on Sunday evening at a movie theater in my area. 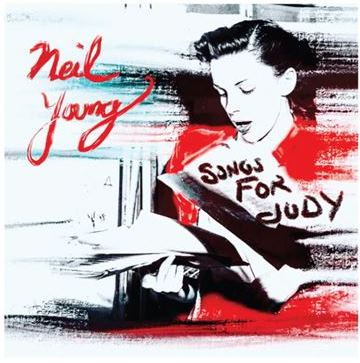 Neil Young on Friday released Songs For Judy from his archives, a compelling collection of live recordings from the solo acoustic sets of his November 1976 tour with his longtime backing band Crazy Horse. It is based on recordings of the shows made at the time by photographer Joel Bernstein, who was accompanied by Rolling Stone writer Cameron Crowe.

After the tour, Bernstein and Crowe created the selection of 23 tracks. Initially, the mix was leaked and became available as a bootleg known as The Bernstein Tapes. While the material on the new release is almost identical to the bootleg, the quality of the sound has been improved.

“Joel and Cameron chose these songs and did a great job,” Young said on his archives website, as reported by Rock Cellar Magazine. “The album is quite unique and I think the period was very well captured in the sound and performances. It was a moment in time, and it’s easy to tell why it’s called Songs For Judy.”

Following are some clips. Here is No One Seems To Know. While according to Setlist.fm, Young first performed the song live in March 1976, the inclusion on Songs For Judy marks the first time it is being released on an album.

After The Gold Rush, the title track of Young’s third studio album from September 1970, is one of my longtime favorites. It still gives me goosebumps when listening to it.

My next pick is Mr. Soul, a tune Young wrote during his time with Buffalo Springfield, which appeared on their second studio album Buffalo Springfield Again, released in November 1967. During the announcement of the song, he alludes to his then-recent 31st birthday.

A Man Needs A Maid is a song from Harvest, Young’s fourth studio release from February 1972. While when announcing the tune Young says he has played it many times, he starts out by teasing another, then-unknown song, which would become one of his best known tunes: Like A Hurricane. Check it out!

Another gem from Harvest that beautifully shines on the new collection is The Needle And The Damage Done. The moving tune, which describes the destructive impact of heroin, was inspired by Young’s grief over the related death of his friend and former Crazy Horse guitarist Danny Whitten.

The last song I’d like to call out is the final track of this excellent collection: Sugar Mountain. Young composed the song on his 19th birthday (November 12, 1964) at a hotel in Fort William, a town in Ontario his band at the time The Squires had visited for a local gig. The first formal release of the tune was a live version that became the B-side to Young’s debut solo single The Loner from February 1969.

I dig many of Neil Young’s crunchy live rockers with Crazy Horse. But the more I listen to solo live performances like the ones on this collection, the more I come to the conclusion that he is oftentimes most powerful when playing all by himself.