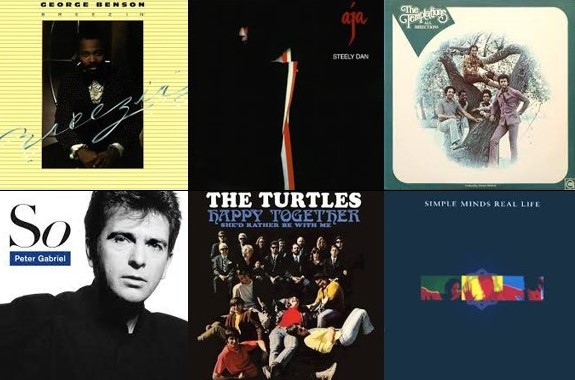 By now it’s safe to assume more frequent visitors know what’s about to happen. To new readers, The Sunday Six is all about enjoying the diversity and beauty of music. I make a deliberate effort to feature different music genres including some I don’t listen to frequently. While the resulting picks, therefore, can appear to be random, these posts don’t capture the first six tunes that come to my mind. At the end of the day, anything goes as long as it speaks to me.

Kicking is off is some groovy guitar pop jazz by George Benson. Benson started to play the guitar as an eight-year-old, following the ukulele he had picked up a year earlier. Incredibly, he already recorded by the age of 9, which means his career now stands at a whooping 57 years and counting! He gained initial popularity in the 1960s, performing together with jazz organist Jack McDuff. Starting with the 1963 live album Brother Jack McDuff Live!, Benson appeared on various McDuff records. In 1964, he released his debut as a bandleader, The New Boss Guitar of George Benson, which featured McDuff on piano and organ. In the ’70s, Benson started to venture beyond jazz into pop and R&B. Breezin’ from May 1976 is a good example. Not only did it top Billboard’s jazz chart, but it also climbed to no. 1 on the R&B and mainstream charts. Here’s the title track, written by Bobby Womack who also originally recorded it in December 1970, together with Hungarian jazz guitar great Gábor Szabó. It appeared on Szabó’s 1971 album High Contrast. Here’s Benson’s version. The smooth and happy sound are perfect for a Sunday morning!

Let’s stay in pop jazzy lane for a bit longer with Steely Dan, one of my all-time favorite bands. I trust Messrs. Donald Fagen and Walter Becker, who first met in 1967 as students at Bard College in Annandale-on-Hudson, N.Y. and quickly bonded over their mutual admiration for jazz and other music, don’t need much of an introduction. By the time they met guitarist Denny Dias in the summer of 1970, they already had written a good amount of original music. Steely Dan’s  first lineup was assembled in December 1971, after Becker, Fagen and Dias had moved to Los Angeles. The additional members included Jeff “Skunk” Baxter  (guitar), Jim Hodder (drums) and David Palmer (vocals). Earlier, Gary Katz, a staff producer at ABC Records, had hired Becker and Fagen as staff songwriters. It was also Katz who signed the Dan to the label. By the time their sixth and, in my opinion, best album Aja appeared in September 1977, Steely Dan had become a studio project by Fagen and Becker who surrounded themselves with a changing cast of top-notch session musicians and other artists. In this case, the latter included Larry Carlton (guitar), Chuck Rainey (bass), Jim Keltner (drums) and Michael McDonald (backing vocals), among others. Here’s Home at Last, which like all other tracks on the album was co-written by Fagen and Becker. In addition to them, the track featured Carlton (though the solo was played by Becker who oftentimes left lead guitar responsibilities to a session guitarist like Carlton), Rainey (bass), Victor Feldman (vibraphone), Bernard Purdie (drums), Timothy B. Schmit (backing vocals), and of course an amazing horn section, including Jim Horn (what an appropriate name!), Bill Perkins, Plas Johnson, Jackie Kelso, Chuck Findley, Lou McCreary and Dick Hyde.

The Temptations/Papa Was a Rollin’ Stone

Time to start switching up things with a dose of ’70s funk and psychedelic soul, don’t you agree? Papa Was a Rollin’ Stone by The Temptations is one of the coolest tunes I can think of in this context. Co-written by Motown’s Norman Whitfield and Barrett Strong, the song was first released as a single in May 1972 by the label’s recording act The Undisputed Truth. While the original to which you can listen here is pretty good as well, it’s the great rendition by The Temptations I heard first and have come to love! They recorded an 11-minute-plus take for their studio album All Directions from July 1972. In September that year, The Temptations also released a 6:54-minute single version of the song. While it still was a pretty long edit for a single, it yielded the group their second no. 1 on the Billboard Hot 100 in the ’70s. It would also be their last no. 1 hit on the U.S. mainstream chart. By the time Papa Was a Rollin’ Stone appeared, the group already had seen various changes and only featured two members of the classic line-up: Otis Williams (baritone) and Melvin Franklin (bass). The other members were Dennis Edwards (tenor), Damon Harris (tenor) and Richard Street (second tenor). Amazingly, The Temptations still exist after some 60 years (not counting the group’s predecessors), with 79-year-old Otis Williams remaining as the only original member. I have tickets to see them together with The Four Tops in early November – keeping fingers crossed! Meanwhile, here’s Papa Was a Rollin’ Stone, of course, the mighty album version, coz I don’t do things half ass here! 🙂

Let’s go to a different decade with another artist I’ve come to dig, which in no small part was due to this album: Peter Gabriel and So, his fifth studio release from May 1986. It’s probably Gabriel’s most mainstream-oriented album. Much of the former Genesis lead vocalist’s other solo work has been more of an acquired taste. I also didn’t pay much attention after his follow-on Us that appeared in September 1992. Fueled by the hit single Sledgehammer, which topped the mainstream charts in the U.S. and Canada, peaked at no. 3 in Australia and New Zealand, and reached the top 10 in Germany and various other European countries, So became Gabriel’s best-selling solo album. I did catch him during the supporting tour in Cologne, Germany, and still have fond memories of that gig. Here’s Don’t Give Up, a haunting duet with Kate Bush. Inspired by U.S. Depression era photos from the 1930s Gabriel had seen, he applied the theme to the difficult economic conditions in Margaret Thatcher’s mid-1980s England. While the tune is a bit of a Debbie Downer, I find it extremely powerful. You can literally picture the lyrics as a movie. I also think the vocals alternating between Gabriel and Bush work perfectly.

I suppose after the previous tune, we all could need some cheering up. A song that always puts me in a good mood is Happy Together by The Turtles. Plus, it broadens our little musical journey to include the ’60s, one of my favorite decades in music. The Turtles started performing under that name in 1965. Their original members, Howard Kaylan (lead vocals, keyboards), Mark Volman (backing vocals, guitar, percussion), Al Nichol (lead guitar, keyboards, backing vocals), Jim Tucker (rhythm guitar, backing vocals), Chuck Portz (bass) and Don Murray (drums), had all played together in a surf rock-oriented band called The Crossfires. That group turned into The Tyrtles, a folk rock outfit, before becoming The Turtles and adopting more of a sunshine pop style. The band’s initial run lasted until 1970. Vollman and Kaylan subsequently launched pop duo Flo & Eddie and released a series of records between 1972 and 2009. In 1983, Vollman and Kaylan legally regained the use of the name The Turtles and started touring as The Turtles…Featuring Flo and Eddie. Instead of seeking to reunite with their former bandmates, Vollman and Kaylan relied on other musicians. The group remains active in this fashion to this day. Their website lists a poster for a Happy Together Tour 2021 “this summer,” though currently, no gigs are posted. Happy Together was the title track of the band’s third studio album from April 1967. Co-written by Alan Gordon and Garry Bonner, the infectious tune became The Turtles’ biggest hit, topping the Billboard Hot 100, climbing to no. 2 in Canada, and reaching no. 12 in the UK, marking their first charting single there.

I can’t believe it’s already time to wrap up this latest installment of The Sunday Six. For this last tune, I decided to pick a song from the early ’90s: Stand by Love by Simple Minds. While I wouldn’t call myself a fan of the Scottish new wave and pop rock band and don’t follow them closely, I generally enjoy their music. I also got to see them live once in Stuttgart, Germany in the early ’90s and remember it as a good show. Simple Minds emerged in late 1977 from the remains of short-lived punk band Johnny & The Self-Abusers. By late 1978, the band’s first stable line-up was in place, featuring Jim Kerr (lead vocals), Charlie Burchill (guitar), Mick MacNeil (keyboards), Derek Forbes (bass) and Brian McGee (drums). That formation recorded Simple Minds’ debut album Life in a Day released in April 1979. Their fifth studio album New Gold Dream (81–82–83–84) was the first to bring more significant commercial success in the UK and Europe. This was followed by a series of additional successful albums that appeared between 1984 and 1995, which included the band’s biggest hits, such as Don’t You (Forget About Me), Alive and Kicking, Belfast Child and Let There Be Love. Today, more than 40 years after their formation, Simple Minds are still around, with Kerr and Burchill remaining part of the current line-up. Here’s Stand by Love, co-written by Burchill and Kerr, from the band’s ninth studio album Real Life that came out in April 1991. This is quite a catchy tune. I also dig the backing vocals by what sounds like gospel choir, which become more prominent as the song progresses.