This is another contribution for “Turntable Talk“, a feature hosted by fellow blogger Dave at A Sound Day.

When Dave recently reached out to introduce the new topic for this round of “Turntable Talk,” I didn’t hesitate one minute to participate again. Thanks, Dave, for having me back and your continued efforts to host this fun series!

When it comes to music, I think it’s fair to say we generally like to focus most of our attention on original tracks. That’s certainly the case for me. I always like to explore new songs, especially if they are written by an artist or a band I dig. But a good cover can also get my attention.

What’s a good cover? I think there’s no standard definition here. However, what it doesn’t mean, at least in my opinion, is that a cover has to be a faithful rendition of the original. In fact, one could argue what’s the point of covering a song when it exactly sounds like the original. As such, I tend to find it more intriguing when an artist or a band take some liberties and put their own spin on a song. In this case I prefer to use the term remake rather than cover.

There are some excellent remakes. My all-time favorite is Joe Cocker’s version of With a Little Help From My Friends. Two other terrific remakes that come to mind are Love Hurts by Nazareth and Proud Mary by Ike & Tina Turner. Not only did Cocker, Nazareth and Ike & Tina Turner make the respective songs their own, but they took them to the next level. I like all three renditions better than the originals!

In some cases, the original tunes are so great that tampering doesn’t make much sense. Two good examples I thought of are the covers of If I Needed Someone and Hard to Handle by Roger McGuinn and The Black Crows, respectively.

Yet another rendition I think is absolutely killer is Elton John’s version of The Who’s Pinball Wizard. To me, this falls somewhere in-between a straight cover and a remake. In any case, John did what I always wished The Who would have done – make this fantastic song longer instead of fading it out in a seemingly arbitrary fashion.

Finally, this brings me to my “bold cover” I’d like to select for this post. I deliberately wanted to go with a tune that looked like an unlikely pick by any of the other participants. In fact, it’s not even a remake of a rock tune but a jazz standard: Al Jarreau’s amazing rendition of Dave Brubeck classic Take Five.

In case it’s been a while since you’ve heard it last or if you haven’t listened to it at all, here’s the original. Composed by saxophonist Paul Desmond, the track was first released by the Dave Brubeck Quartet in December 1959 on their album Time Out. This was one of the first jazz tunes I ever heard many moons ago. Even though I wasn’t into jazz at the time, I’ve always loved it!

And here’s where Al Jarreau took the tune on his December 1977 live album Look to the Rainbow: Live In Europe. When I heard his rendition for the first time, I was blown away. How Jarreau used his voice here as an instrument is just super cool. In fact, this type of rendition is called scat singing, which per Wikipedia is “vocal improvisation with wordless vocables, nonsense syllables or without words at all.” 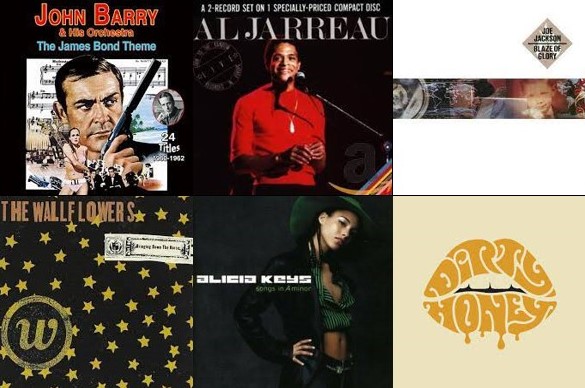 Welcome to another Sunday Six. In case you’re a first time visitor of the blog, this recurring feature celebrates the beauty of music six random tunes at a time, meaning songs from different genres and different decades. Pretty much anything goes in the same post. A jazz instrumental from the ’50s could be followed by a ’70s hard rock tune. A blues track from the ’60s could appear together with a pop song from the ’80s. My only condition is I have to like the tracks and how they work together. With that being said, let’s get to it!

“Bond, James Bond.” These words started to fascinate me when I was a young teenager back in Germany. I still like the James Bond movies, as ridiculously unrealistic as they are. Especially the older pictures with Sean Connery and Roger Moore are classics in my book. Of course, part of every Bond picture is the soundtrack, including the James Bond Theme, which has been featured in every 007 film since the first one, Dr. No, from 1962. The signature theme was written by English singer and film composer Monty Norman and arranged by John Barry, a composer and conductor of film music. Barry also wrote the scores for 11 Bond pictures between 1963 and 1987. I always loved the track’s distinct guitar part played by English session guitarist Vic Flick, using a Clifford Essex Paragon De Luxe electric/acoustic vintage guitar from 1939.

I know of no other artist who had such an amazing ability to use his voice as an instrument like Al Jarreau. Perhaps the most compelling example is his rendition of jazz standard Take Five, which was included on a May 1977 live album titled Look to the Rainbow. I’ve always loved the original written by Paul Desmond and first recorded by the Dave Brubeck Quartet for the album Time Out from December 1959. But Al Jarreau took the track to a different level. I guess many folks at the time agreed. Look to the Rainbow became Jarreau’s breakthrough in Europe and the U.S. It won the 1978 Grammy Award for Best Vocal Jazz Performance. If you haven’t heard this, check it out. If you already know Jarreau’s rendition, listen to it again anyway! 🙂

Let’s jump to the late ’80s with a great tune by Joe Jackson. The British singer-songwriter first entered my radar screen in 1980, when I received his excellent sophomore studio album I’m the Man for my 14th birthday. I still own that vinyl copy. I’ve since listened on and off to Jackson, a versatile artist who has played many genres over the decades, including punk, new wave, pop, rock, jazz and Latin. He’s also fun live. I saw him in May 2019 at a mid-size theater in New Jersey. You can read about it here and watch some clips I took. Down to London is one of my favorite tracks from Blaze of Glory, Jackson’s 10th studio album that came out in April 1989. Like all other tunes on the record, he wrote the song.

Next we’re on to the ’90s. I guess, I’m going chronologically this time. When The Wallflowers released their sophomore album Bringing Down the Horse in May 1996, they were still a standing roots rock-oriented band. Their origins date back to 1989 when Jakob Dylan (lead vocals, guitar, piano) and his childhood friend Tobi Miller (lead guitar) began forming a band called The Apples. Jakob is a son of Bob Dylan and his first wife Sara Dylan (nee Noznisky). After Barrie Maguire (bass), Peter Yanowitz (drums) and Rami Yafee (keyboards) had joined the group, they changed their name to The Wallflowers. The band signed with Virgin Records in 1991 and released their eponymous debut album in August 1992. Five additional studio albums appeared thereafter until 2012. Since 2013, Dylan has been the only remaining original member, relying on touring musicians for shows. A new album titled Exit Wounds is slated for July 9, the first to appear under The Wallflowers name in nine years. Apparently, it will be supported by a tour. For now, here’s 6th Avenue Heartache, written by Dylan, one of the band’s best known tunes and certainly one of my favorites.

Alicia Keys is an interesting artist in my book. While much of her music falls outside my core wheelhouse, I still like her. Undoubtedly, Keys’ amazing voice has a lot to do with it, but it’s also her stage presence. There’s just something about Keys that draws me in. It’s like she’s radiating – I can’t quite explain it. Anway, Fallin’ is a breathtaking tune from Keys’ debut album Songs in A Minor, which came out in June 2001. The record had a long history, which I hadn’t known until I read about it in Wikipedia. Keys, a classically trained pianist, already began writing songs for the record as a 14-year-old in 1995. She recorded the album in 1998 for Columbia Records, but the label rejected it. Eventually, it appeared in June 2001 on J Records, a new label that had been formed by Clive Davis who had sensed Keys’ talent and bought her contract from Columbia. His instincts turned out to be right. Songs in A Minor topped the Billboard 200 and won five Grammy Awards in 2002. As of 2015, the album had sold 7.5 million copies in the U.S. and more than 12 million worldwide. Fallin’ was solely written by Keys. That tune still gives me goosebumps.

I guess this already brings me to the last track of this Sunday Six installment. It’s time for some kickass rock and one of my new “discoveries,” Dirty Honey. I first featured this great rock band from Los Angeles a week ago in this Best of What’s New installment. The band, which has been around since 2017, features Marc Labelle (vocals), John Notto (guitar), Justin Smolian (bass) and Corey Coverstone (drums). Their classic rock-oriented sound is reminiscent of groups like Led Zeppelin, Aerosmith and The Black Crowes. Here’s Tied Up, credited to the entire band, from their eponymous studio debut album released on April 23. This is a fun tune that nicely rocks!