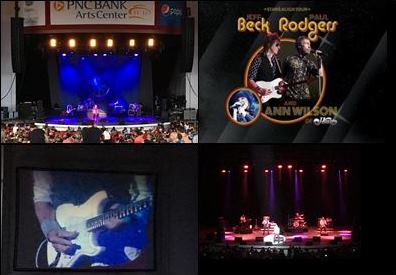 As noted in a previous post, seeing Ann Wilson, Jeff Beck and Paul Rodgers as part of their Stars Align Tour at PNC Bank Arts Center in Holmdel, N.J., was a spontaneous decision, based on promising reviews and YouTube clips. Another reason was my previous disappointment that Bad Company wasn’t among the special guests during  Lynyrd Skynyrd’s farewell concert there in June. While Sunday night’s event wasn’t the best show I’ve ever seen, I came away a happy camper after three and a half hours of solid rock at a very reasonable cost.

As anticipated, Ann Wilson opened the night; what I didn’t expect was that she started at 7:00 p.m. on the dot, literally as printed on the ticket. I had just taken my seat – good thing I had decided against food and drink, which are completed overpriced to begin with. I can’t recall a rock & roll show I’ve been to that got underway on time!

Except for Heart’s Barracuda, Wilson presented covers, mostly from her upcoming solo album that is set to arrive September 14. Called Immortal, it honors artists who have passed away, such as David Bowie, Tom Petty and Glenn Frey.

Here’s Barracuda, one of Heart’s best known songs credited to Ann Wilson and other members of the band, including her sister and lead guitarist Nancy Wilson, guitarist Roger Fisher and drummer Michael Derosier. The tune was the lead single from Heart’s second studio album Little Queen that appeared in May 1977.

Wilson opened and closed her set with tunes by The Who, The Real Me and Won’t Get Fooled Again, respectively. Below is a clip of the latter. Written by Pete Townshend, the song is the closer of Who’s Next, the band’s fifth studio album from August 1971. It also was released separately as the record’s lead single in June that year.

Next up was Jeff Beck, which came a bit as a surprise to me. Since I think it’s fair to say he’s the heavy weight among the three, I thought he’d close out the night. This was my second time seeing Beck, so I knew that much of his set would be instrumental. While his guitar-playing and sound are mind-blowing, I generally prefer his songs with vocals, especially with Rod Stewart on Beck-Ola. I realize true Beck fans may not be with me here.

Having said the above, the first tune I’d like to highlight here is an instrumental, a smoking hot cover of You Know You Know. Originally, the John McLaughlin tune appeared on The Inner Mounting Flame, the 1971 debut album by jazz-rock fusion band Mahavishnu Orchestra. Part of the reason I chose this track is the cool extended solo by ace bassist Rhonda Smith. When I saw Beck for the first time in July 2016, his backing band also included a killer female bassist: Tal Wilkenfeld. Speaking of Beck’s excellent band, the other members were cellist Vanessa Freebairn-Smith, drummer Vinnie Colaiuta and vocalist Jimmy Hall. Since I missed recording it myself, I’m relying on a clip from another recent gig.

Among the songs featuring Hall on vocals was the Jimi Hendrix tune Little Wing. It was included on the second studio album by The Jimi Hendrix Experience, Axis: Bold As Love, which came out in December 1967. While Hall is a solid vocalist, I felt by comparison he wasn’t as top-notch as the other members of the band.

The second to last song of the regular set was a great cover of Superstition, one of my favorite Stevie Wonder tunes. Wonder included it on his 15th studio album Talking Book from October 1972. It also was released separately as the lead single that appeared a few days prior to the album.

After a two-song encore by Beck, it was on to Paul Rodgers. Of the three artists I’m most familiar with his music, so it’s perhaps not a big surprise that he was the most accessible performer to me. Except for two covers, Rodgers’ set was evenly divided between Bad Company and Free songs. I thought he was in great shape, as was his backing band featuring Pete Bullick (guitar), Ian Rowley (bass), Rich Newman (drums) and Gerard Louis (keyboards).

The first tune I’d like to call out is Feel Like Makin’ Love. Co-written by Rodgers and Bad Company guitarist and co-founder Mick Ralphs, the song appeared on the band’s second studio album Straight Shooter from April 1975. It was also released separately as the record’s second single in November that year.

One the Free tunes Rodgers played was Mr. Big. Credited to all members of the band that in addition to Rodgers included Andy Fraser, Paul Kossoff and Simon Kirke, the song appeared on their third studio album Fire And Water. Among others, Rowley shines with a solo, the second extended bass solo for the night.

The last song of Rodgers’ regular set was another Bad Company classic, Rock & Roll Fantasy. Penned by him, the tune was included on the band’s fifth studio album Desolation Angels, which came out in March 1979. It also became the record’s lead single and the band’s best-selling single in the U.S. About 1:40 minutes into the song, somebody wearing a hat and playing a tambourine walked on stage, who turned out to be Steven Van Zandt. As if to prove it, he briefly took off his hat to reveal his signature bandana.

Rodgers saved Free’s signature tune All Right Now until the very end of the night as his second encore. Co-written by him and Fraser, the song was also included on the Fire And Water album and became Free’s most successful single. 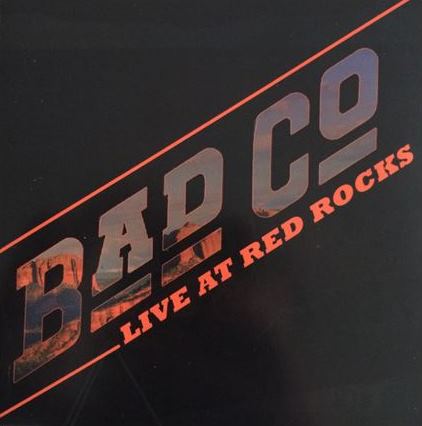 Paul Rodgers is one of my favorite male rock vocalists. So I was intrigued when a live album from Bad Company popped up under “New Releases” in my Apple Music last week. It turns out that while Live At Red Rocks appeared on iTunes and I assume other online/streaming platforms on January 12, it first went on sale exclusively at Wal-Mart last September.

According to Ultimate Classic Rock, the CD/DVD set captures a May 15 show during the band’s 2016 U.S. tour with Joe Walsh at the breathtaking Red Rocks Amphitheatre close to Denver. A concert review in the Denver Post noted that Walsh opened the night backed by a 10-piece band, telling the audience, “We’ll get you sweaty and Bad Company will finish you off.” This must have been one hell of a show at one of the most stunning performance venues!

Rochester, N.Y. classic rock radio station WCMF 96.5 FM noted that while co-founder and ex-Mott The Hoople guitarist Mick Ralphs is credited on the recording, he was no longer part of the band’s lineup due to health issues. Rich Robinson of The Black Crows stood in for him. Also on guitar was touring musician Howard Leese, formerly with Heart, who has played with the Paul Rodgers Band and Bad Company since 2008. According to Wikipedia, the band’s current lineup also includes Simon Kirke (drums), another co-founding member who played with Rodgers in Free; and Todd Ronning (bass).

Time to get to some music. Feel Like Makin’ Love is one of Bad Company’s best known songs. Co-written by Rodgers and Ralphs, the tune is included on the band’s second studio album Straight Shooter, which appeared in April 1975. It was also released separately as a single in August that year. Here’s a fairly decent video clip.

Burnin’ Sky is the title track from the band’s fourth studio record from March 1977. It was written by Rodgers and also came out separately as the album’s second single.

Seagull is one of the acoustic tracks of the set. Another Rodgers/Ralphs co-write, it is the closer to Bad Company’s eponymous studio album, which appeared in June 1974. During this live performance, Kirke joined Rodgers, Leese and Robinson on acoustic guitar and threw in a nice solo. Here’s a great video clip.

Here’s Movin’ On, a tune written by Ralphs and first released as a single in 1972 by a band called Hackensack. Bad Company subsequently included it on their first album. They also released it as the record’s second single.

The last track I’d like to highlight is Bad Company, the title track of the band’s eponymous debut record. Co-written by Rodgers and Kirke, the song also became the album’s third single. Here’s a great video clip.

Rodgers’ website currently lists four dates for 2018. One solo show is coming up this Saturday, January 20 in Bensalem, Pa. The remaining dates are Bad Company gigs: two in Florida in mid-February, and one in Punta Cana, Dominican Republic at the end of April. The last show sounds like an attractive proposition to me, especially with an outside temperature of 19F as I’m writing this!