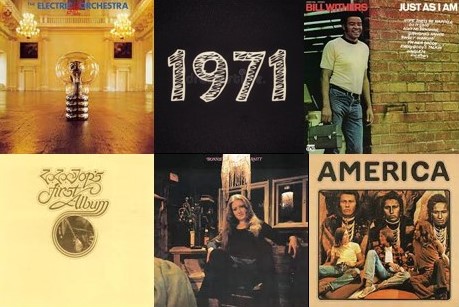 Earlier this week, I wrote about my top 5 studio albums turning 50 this year. That post was inspired by “Top 50 Albums Turning 50,” a fun program on SiriusXM, Classic Vinyl (Ch. 26) I had caught the other day. But capturing the greatness of 1971 with just five albums really doesn’t do justice to one of the most remarkable years in music, so I decided to have some more fun with it.

This time, I’m looking at great debut albums from 1971. While that caveat substantially narrowed the universe, an initial search still resulted in close to 10 records I could have listed here. Following are my five favorites from that group, again in no particular order.

Electric Light Orchestra, or ELO, were formed in Birmingham, England in 1970 by songwriters and multi-instrumentalists Jeff Lynne and Roy Wood, along with drummer Bev Bevan, as an offshoot of British rock band The Move. The idea was to combine Beatlesque pop and rock with classical music. I always thought the result was somewhat weird, feeling like The Beatles and Phil Spector’s “Wall of Sound” on steroids; yet at the same time, ELO created a signature sound and songs that undoubtedly were catchy. The band’s debut album, the only record with Wood, first came out in the UK on December 3, 1971 as The Electric Light Orchestra. In the U.S., it appeared in March 1972, titled No Answer. Fun fact: According to Wikipedia, that title was accidental when a representative from U.S. label United Artists Records unsuccessfully tried to reach an ELO contact in the UK and wrote down “no answer” in his notes. Here’s the record’s opener 10538 Overture, a tune Lynne wrote, which initially was recorded by The Move to become a B-side to one of their singles.

Bill Withers/Just As I Am

Bill Withers got a relatively late start in music. By the time his debut single Three Nights and a Morning appeared in 1967, Withers already was a 29 year-old man who previously had served in the U.S. Navy for nine years. It took another four years before his debut album Just As I Am was released in May 1971. Unlike his first single that went unnoticed, the record became a significant success, reaching no. 35 and no. 37 in the U.S. and Canadian mainstream charts, and peaking at no. 9 on the Billboard Soul charts. Much of the popularity was fueled by lead single Ain’t No Sunshine, one of Withers’ best known songs and biggest hits. Just As I Am was produced by Booker T. Jones, who also played keyboards and guitar. Some of the other musicians on the album included M.G.’s bassist and drummer Donald “Duck” Dunn and Al Jackson, Jr., respectively, as well as Stephen Stills (guitar) and Jim Keltner (drums). While Ain’t No Sunshine is the crown jewel, there’s more to this record. Check out Do It Good, a soul tune with a cool jazzy groove, written by Withers.

While guitarist Billy Gibbons recorded ZZ Tops’s first single Salt Lick (backed by Miller’s Farm) in 1969 with Lanier Greig (bass) and Dan Mitchell (drums), the band’s current line-up with Dusty Hill (bass) and Frank Beard (drums) has existed since early 1970. This makes ZZ Top the longest-running group in music history with unchanged membership. It was also the current line-up that recorded the band’s debut ZZ Top’s First Album released on January 16, 1971. It was produced by Bill Ham, who was instrumental to ZZ Top’s success. Not only did he produce or co-produce all of their records until their 12th studio album Rhythmeen from September 1996, but he also served as the band’s manager until that year. Here’s the great blues rocker Brown Sugar, one of my favorite early ZZ Top tunes written by Gibbons.

As a long-time fan of the amazing Bonnie Raitt, picking her eponymous debut album for this post was an easy choice. According to Wikipedia, it was recorded at an empty summer camp located on an island on Lake Minnetonka in Minnesota. That location had been recommended to Raitt by John Koerner and Dave Ray, two close friends and fellow musicians. We recorded live on four tracks because we wanted a more spontaneous and natural feeling in the music, a feeling often sacrificed when the musicians know they can overdub their part on a separate track until it’s perfect, Raitt explained in the album’s liner notes. Here’s Mighty Tight Woman written and first recorded by Sippie Wallace as I’m a Mighty Tight Woman in 1926.

America sometimes are dismissed as a Crosby, Stills & Nash knockoff. I’ve loved this band since I was nine years old and listened for the first to their 1975 compilation History: America’s Greatest Hits, which my six-year older sister had on vinyl. The folk rock trio of Dewey Bunnell (vocals, guitar), Dan Peek (vocals, guitar, piano) and Gerry Beckley (vocals, bass, guitar, piano) released their eponymous debut album on December 26, 1971 in the U.K. That was the year after they had met in London where their parents were stationed with the U.S. Air Force. The U.S. version of the record, which appeared on January 12, 1972, included A Horse with No Name, a song that initially was released as the group’s first single and was not on the UK edition. Remarkably, that single became America’s biggest hit, topping the charts in the U.S., Canada and France, and surging to no. 3 in the UK. Here’s a track from the original UK edition: Sandman written by Bunnell. Beckley and Bunnell still perform as America to this day. Peek left the group in 1977, renewed his Christian faith, and pursued a Christian pop music career. He passed away in July 2011 at the age of 60.