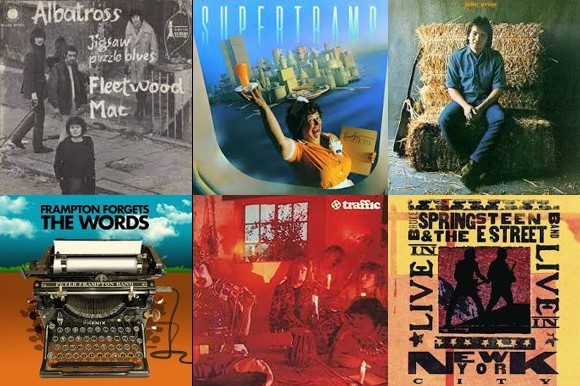 Welcome to another installment of The Sunday Six. To those who follow my blog I no longer need to explain the idea behind the weekly recurring feature. For first time visitors, basically, these posts celebrate music in many different flavors from different periods of time, spanning the past 60 to 70 years or so. Ready?

Let’s start off our little musical excursion with one of the most beautiful guitar-driven instrumentals I know: Albatross by Fleetwood Mac. This track goes all the way back to the Mac’s beginning when they were a blues rock band led by amazing British guitarist, vocalist and co-founder Peter Green who also wrote Albatross. At the time this dreamy track was released as a non-album single in November 1968, Fleetwood Mac also featured co-founders Jeremy Spencer (guitar, backing vocals), Mick Fleetwood (drums) and John McVie (bass), as well as Danny Kirwan (guitar, vocals) who had just joined two months earlier. In fact, it was Kirwan who helped Green complete Albatross, which was recorded without Spencer. The tune was subsequently included on the U.S. and British compilation albums English Rose (January 1969) and The Pious Bird of Good Omen (August 1969), respectively. Green’s guitar tone is just unbelievable.

The other day, I found myself listening to Breakfast in America, the sixth studio album by English prog-rock-turned-pop band Supertramp. I got it on vinyl shortly after its release in March 1979 and own that copy to this day. While I played the record over and over again at the time, it’s still in fairly good shape. It also turns out I continue to enjoy the songs – something I certainly cannot say for a good deal of other music I listened to back then as a 13-year-old in Germany. Breakfast in America, which spawned various hit singles, was hugely popular in Germany where it topped the charts, just like in many other countries in Europe and beyond. Take the Long Way Home remains one of my favorite tracks from the album. Written by the band’s co-frontman and principal songwriter Roger Hodgson, the tune also became the record’s fourth single in October 1979. BTW, you also gotta love the cover art, which won the 1980 Grammy Award for Best Recording Package.

I still know very little about John Prine, who is widely viewed as one of the most influential singer-songwriters of his generation. But I’ve finally started listening to his music. According to Wikipedia, Prine has been called the “Mark Twain of songwriting.” The likes of Bob Dylan, Johnny Cash and Roger Waters have called out Prine. He mentored younger artists, such as Jason Isbell, Amanda Shires, Brandi Carlile and Margo Price. In fact, I first listened to at least one John Prine song a long time before I even knew his name: Bonnie Raitt’s great cover of Angel From Montgomery, which she recorded for her fourth studio album Streetlights that appeared in September 1974. Here’s the original from John Prine’s eponymous debut album released in 1971. I’m starting to like it as much as Raitt’s rendition.

If you read my Best of What’s New installment from a week ago, you probably recall it featured a great instrumental cover of George Harrison’s Isn’t It a Pity from Peter Frampton’s new album Peter Frampton Forgets the Words. Since my recent “discovery” of the all-instrumental record, I’ve enjoyed listening to it. Here’s another beautiful track that’s perfect for a Sunday morning: Avalon, the title song of the eighth and final studio album by English outfit Roxy Music, released in May 1982. Written by frontman Bryan Ferry, the tune also became the album’s second single in June 1982. I was a bit surprised to see it “only” reached no. 13 in England, while it didn’t chart at all in the U.S. – unlike the record that topped the charts in the UK and climbed to no. 53 in the U.S. and became Roxy Music’s best-selling album. In 1983, Ferry dissolved the band to focus on his solo career. In 2001, Roxy Music reformed for a 30th anniversary tour and was active on and off until they disbanded for good in 2011. Check out this great clip of Frampton and his band. Not only does he sound great, but you can clearly see how he and his fellow musicians enjoyed recording the tune. I don’t think you can fake this!

Time for some more ’60s music, don’t you agree? While I hate traffic when I’m in my car, I love it when it refers to the British rock band. Undoubtedly, much of my affection has to do with Steve Winwood, one of my long-time favorite artists. I get excited to this day when I hear the man sing and play his growling Hammond B-3. But amid all my love for Winwood, let’s not ignore excellent fellow musicians Jim Capaldi (drums, vocals), Dave Mason (guitar, bass, multiple other instruments, vocals) and Chris Wood (flute, saxophone, Hammond, percussion, vocals), who founded Traffic with Winwood in April 1967. It’s quite amazing that at that time, 18-year-old Winwood already had had a successful four-year career under his belly with The Spencer Davis Group. Dear Mr. Fantasy, co-written by Capaldi, Winwood and Wood, is from Traffic’s debut album Mr. Fantasy released in December 1967. When I saw Winwood live in March 2018, he played guitar on that tune, demonstrating his impressive fretboard chops.

For the last tune in this Sunday Six installment, let’s have a true rock and soul party. In this context, I can’t think of anything better than this live clip of Bruce Springsteen & the E Street Band, captured in June 2000 at New York City’s Madison Square Garden at the end of the band’s triumphant 1999-2000 reunion tour. In this 19-minute-plus version of Tenth Avenue Freeze-Out, the Boss is literally taking his audience to rock & soul church. Yes, it’s long and perhaps somewhat over the top, but I believe Springsteen was authentic when at some point he noted, “I’m not bull-shittin’ back here.” Tenth Avenue Freeze-Out, written by Springsteen and first appearing on his legendary breakthrough album Born to Run from August 1975, tells the story about the band’s formation. Watching this amazing footage, I get a bit emotional when seeing the big man Clarence Clemons and Danny Federici, who sadly passed away in 2011 and 2008, respectively. Though at the end of the day, it’s a beautiful celebration of their lives. If you haven’t seen this, I encourage you to watch it. And even if it’s not your first time, it’s worthwhile watching again. Live music doesn’t get much better!