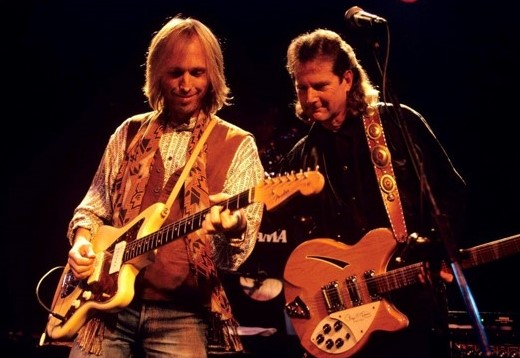 This morning, my streaming music provider served up a great Get Up! playlist, which was based on my listening habits. It included Tom Petty’s version of Feel a Whole Lot Better. Not only did the tune immediately put me in a good mood, but it once again reminded me that in addition to writing so many great songs, Petty also performed fantastic covers. The Byrds and Roger McGuinn in particular were important musical influences. I also happen to dig the latter two, so I thought it would be fun to put together a post of Petty’s Byrds covers.

Let’s start with So You Want to Be a Rock ‘n’ Roll Star, which appeared on Pack Up the Plantation: Live!, the first live album by Tom Petty and the Heartbreakers from November 1985. Co-written by Roger McGuinn and Chris Hillman, the tune was first released in January 1967 as the lead single to The Byrds’ fourth studio album Younger Than Yesterday, which came out the following month.

Next up is the above-mentioned Feel a Whole Lot Better. Petty included that tune on his solo debut Full Moon Fever released in April 1989. The song was written by Gene Clark and first appeared in June 1965 as the b-side to the single All I Really Want to Do. Both of these songs were included on The Byrds’ debut album Mr. Tambourine Man released one week after the single.

For the last clip, I needed to cheat a bit. Mr. Tambourine Man, of course, is a Bob Dylan tune; however, it was The Byrds who popularized it in April 1965. And while Dylan has written many great songs, I think The Byrds not only made Mr. Tambourine Man their own, but also significantly improved it in the process! The following cover by Roger McGuinn and Tom Petty and the Heartbreakers is from a beautiful concert that took place at New York’s Madison Square Garden in October 1992 to celebrate the 30th anniversary of Dylan as a recording artist. Most of that show was captured on a live album released in August 1993 and separately on VHS, DVD and Blu-ray.

In the wake of Petty’s untimely death in October 2017, McGuinn was interviewed for a story published by Philly Voice. He recalled the first time he heard American Girl, the third single off the eponymous debut album by Tom Petty and the Heartbreakers. “I said, ‘when did I record that?…I was kidding, but the vocal style sounded just like me and then there was the Rickenbacker guitar, which I used. The vocal inflections were just like mine. I was told that a guy from Florida named Tom Petty wrote and sings the song, and I said that I had to meet him.” And he did, and the two hit it off!

McGuinn added, “When I covered ‘American Girl,’ I changed a word or two and Tom asked me if it was because the vocal was too high and I said ‘yes.’ I had fun with Tom’s song…There is nobody like Tom Petty.” I couldn’t agree more!