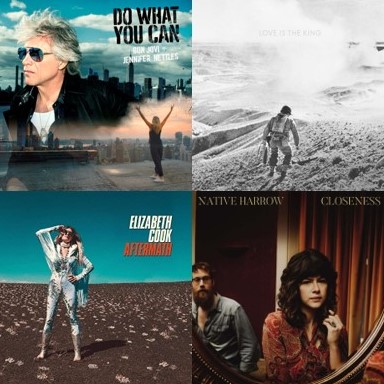 Another weekend brings another slate of new music. This installment of Best of What’s New features a nice mix of big name and lesser known artists. Genres include country-oriented rock, folk, indie rock and folk rock. Let’s get to it!

Bon Jovi & Jennifer Nettles/Do What You Can

Jon Bon Jovi and country band Sugarland frontwoman Jennifer Nettles joined forces for an updated version of Do What You Can, a tune from Bon Jovi’s 15th studio album 2020 scheduled for October 2. Written during the early days of COVID-19, initially, the song only included the first verse and the chorus. Jon Bon Jovi invited fans via social media to contribute lyrics, essentially asking them to tell their own pandemic stories. He first revealed an acoustic version of the complete song during the Jersey4Jersey benefit online concert. The tune was subsequently released as a single on July 23. “As I finished the mix and did the video, I said, ‘Boy, this song would have such crossover potential’, Bon Jovi told Rolling Stone. “It makes you feel good and the message is just right on at this time that when you can’t do what you do, do what you can,” added Nettles during a recent Facebook chat. Do What You Can very much has the same feel of the artists’ previous collaboration Who Says You Can’t Go Home from 2006. Both tunes remind me of The Lonesome Jubilee, one of my favorite John Mellencamp albums from 1987.

Jeff Tweedy/Love Is the King

American songwriter, musician and record producer Jeff Tweedy is best known as vocalist and guitarist of alternative rock band Wilco, founded in 1994 by former members of Uncle Tupelo, an alternative country group, which Tweedy co-founded as well. Between these two bands and his solo efforts, Tweedy has released close to 20 albums over the past 30 years. Love Is King is the title track of his fourth solo album that is set to come out on October 23. As reported by Pitchfork, Tweedy announced the tune on September 15, together with a second track of the forthcoming album, Guess Again. “At the beginning of the lockdown I started writing country songs to console myself,” he pointed out in an accompanying statement. “Folk and country type forms being the shapes that come most easily to me in a comforting way. “Guess Again” is a good example of the success I was having at pushing the world away, counting my blessings—taking stock in my good fortune to have love in my life. A few weeks later things began to sound like “Love Is the King”—a little more frayed around the edges with a lot more fear creeping in. Still hopeful but definitely discovering the limits of my own ability to self soothe.”

Elizabeth Cook is an American country singer-songwriter who has been an active recording artist since 2000. Originally, she hails from Wildwood, Fla. where she was born as the youngest of 12 children. Cook already joined her parents on stage at the age of 4. Her mother Joyce was a mandolin and guitar played and her dad Thomas played upright bass, which he had learned while serving time in an Atlanta prison for illicit production of high-proof distilled spirits. Cook holds the distinction of having performed more than 400 times on the Grand Ole Opry since her March 2000 debut, the most appearances to date by a non-member. Her studio debut The Blue Album came out in November 2000. Perfect Girls of Pop is a track from her seventh and most recent album Aftermath released on September 11. It’s catchy tune that sounds much more like indie pop rock than country.

Native Harrow are a folk rock duo from Eastern Pennsylvania, comprised of Devin Tuel (lead vocals, guitar) and her partner Stephen Harms (bass, drums, keyboards, guitar). Unfortunately, publicly available information on them is limited and the following is based on this Facebook piece and a review by Staccatofy. Carry On is a beautiful tune from Native Harrow’s fourth studio album Closeness, which came out on August 21. Two things about this song grabbed me right away: The warm sound, especially the keyboard, and the vocals by Tuel, who apparently is a classically trained singer. I also think the gospel style choir in the last third of the track is a perfect fit to what essentially is a gospel song. Tuel and Harms recorded the album’s 10 tunes at a Chicago studio together with drummer and engineer Alex Hall over the course of only two 3-day sessions in late December 2019 and early January 2020. The basic tracks were captured live in studio with Tuel, Harms and Hall on vocals/guitar, bass and drums, respectively. The album follows their 2019 release Happier Now.

Evidently trying to build some buzz ahead of Homegrown, Neil Young on Friday released Vacancy, the second single from his long-awaited album that originally was supposed to come out in 1975. It’s a classic Young mid-tempo rocker he wrote and, as reported by Ultimate Classic Rock, one of seven tracks that were never issued on any other of his subsequent albums.

Homegrown was recorded at Young’s Broken Arrow Ranch Studio in 1974 and early 1975, and features Stan Szelest (organ), Ben Keith (lap steel), Tim Drummond (bass) and Karl T. Himmel (drums). Additionally, there are guest appearances by Levon Helm and Emmylou Harris. Originally, this album was scheduled to come out after Harvest and prior to Comes a Time.

I apologize, wrote Young on his website back in February. This album ‘Homegrown’ should have been there for you a couple of years after ‘Harvest.’ It’s the sad side of a love affair. The damage done. The heartache. I just couldn’t listen to it. I wanted to move on. So I kept it to myself, hidden away in the vault, on the shelf, in the back of my mind…but I should have shared it. The love affair Young alluded to was his relationship with actress Carrie Snodgress from late 1970 until 1975.

The album is actually beautiful, Young went on. That’s why I made it in the first place. Sometimes life hurts. You know what I mean. Anyway, it’s coming your way in 2020, the first release from our archive in the new decade.

Homegrown was recorded in analog and mastered to vinyl from the original master tapes, restored with love by John Hanlon, Young further explained. This album, in vinyl, displays the beauty, feeling and depth of music recorded in the analog domain, before digital. It’s the perfect example of why I can’t forget how good music used to sound.

This is the one that got away…Well, while 45 years certainly is a long time, I have no doubt many Neil Young fans will be excited and think it was worth the wait! Homegrown is scheduled for June 19.