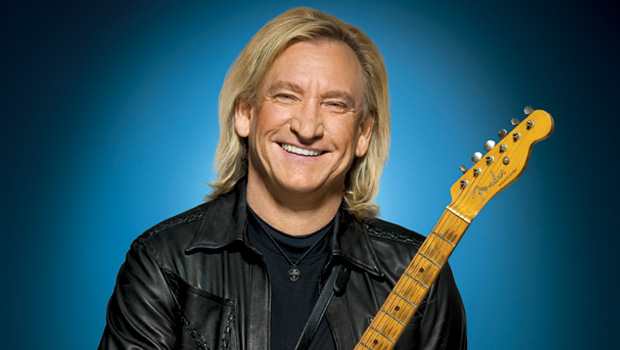 Once asked about Joe Walsh, Eric Clapton said, “I don’t listen to many records, but I listen to his.” Or how about Jimmy Page? “I’ve loved his style since the early James Gang,” noting his “tremendous feel” for the guitar. And, as Walsh’s bio on his website adds, this praise from two of the greatest guitar icons on the planet came even before he joined the Eagles, my introduction to Walsh. I still get goosebumps to this day when listening to the solo with Don Felder on Hotel California, one of the most epic moments in rock music. Do I really need more reasons to justify a Walsh playlist?

Joe Fidler Walsh was born in Wichita, Kan. on November 20, 1947. His mother was an avid piano player who brought music into the family’s humble home before Joe was old enough to discover rock n’ roll on the radio. Though he had played guitar in a high school cover band and a popular Kent, Ohio bar band while in college, Joe really came into his own in 1968, when he joined the Cleveland-based James Gang. In March 1969, they released their debut Yer’ Album, which became a staple on FM radio. The sophomore James Gang Rides Again from July 1970, included Funk #49, which despite initial moderate success has become a rock classic.

In 1972, Walsh left James Gang, finding the band’s trio format too constraining only to form another trio later that year, Barnstorm. In addition to Walsh (guitar, keyboards), the band included his college buddy Joe Vitale (drums, flute, keyboards) and Kenny Passarelli (bass). Their record company decided to market their albums as Joe Walsh solo records, which eventually became a source of increasing frustration for Walsh and one of the reasons Barnstorm disbanded.

In December 1974, Walsh released his first true solo album So What, which featured contributions from Don Henley, Glenn Frey and Randy Meisner of the Eagles, the band Walsh joined the following year to replace founding member Bernie Leadon. Walsh appeared on the Eagles’ studio albums Hotel California (December 1976), The Long Run (September 1979) and Long Road Out Of Eden (October 2007). He was part of the band’s reunion in 1994 and remains a member to this day. In addition to his various band projects, Walsh has also released 12 solo studio albums (including two Barnstorm records) and a live album to date. Time for some music.

What better tune to kick things off than the above mentioned Funk #49, a kick ass rocker co-written by Walsh and fellow James Gang members Jim Fox (drums, vocals, percussion, keyboards) and Dale Peters (bass, vocals, guitars, keyboards, percussion). “I came up with the basic guitar lick,” Walsh said according to Songfacts quoting the book The Guitar Greats. “It was a real good example of how we put things together, bearing in mind that it was a three piece group, and I don’t think that there was any overdubbing. The only thing we really added was the percussion middle part, which the three of us actually played, putting some parts on top of the drums, but that’s the three piece James Gang, and that’s the energy and kind of the symmetry we were all about.”

Rocky Mountain Way appeared on Barnstorm’s second album The Smoker You Drink, The Player You Get, which as previously noted was marketed as Walsh’s second solo record. The song is credited to Walsh, Vitale, Passarelli and Rocke Grace, who had joined the band as a keyboarder. One of the best known Walsh tunes, the track peaked at no. 23 on the Billboard Hot 100.

Next up: Welcome To The Club, the opener to So What, Walsh’s first true solo album from December 1974. This is another nice rocker!

For the aforementioned reasons, I was very tempted to include the title track from Hotel California in this playlist. Instead, I decided to feature Life In The Fast Lane, my second favorite tune from the Eagles’ fifth studio album that appeared in December 1976. Walsh came up with the signature guitar riff, while Henley and Frey co-wrote the lyrics. The song became the record’s third single, reaching no. 11 on the Billboard Hot 100.

In-between Hotel California and the next Eagles album The Long Run, Walsh released another solo record in May 1978. But Seriously, Folks… includes his most successful solo hit: Life’s Been Good. Here’s the full close to 9-minute album version of the hilarious take on the excesses rock stardom. It also appeared as a 4 1/2-minute single, which climbed to no. 12 on the Billboard Hot 100.

In The City is a tune co-written by Walsh and Barry De Vorzon from The Long Run, which appeared in September 1979 and was the Eagles’ final studio album until 2007’s Long Road Out Of Eden. It is one of the few Eagles tunes on which Walsh is also handling lead vocals. He had first recorded the song in 1979 for the soundtrack of the motion picture The Warriors.

In March 1981, Walsh released his next solo album, There Goes The Neighborhood. It featured a smoother sound and would become his final commercial and critical success for more than 25 years. Here’s Rivers (Of The Hidden Funk), a track Walsh originally had co-written with Don Felder for the Eagles’ The Long Run album that didn’t make the record. Felder appeared as a guest on talk box guitar.

After five additional solo albums that were not well received, Walsh took a 20-year break before resurfacing in June 2012 with Analog Man, his most recent solo effort. Co-produced by Jeff Lynne, the album features an impressive array of guests, who in addition to Lynne include Ringo Starr, Graham Nash, David Crosby and Little Richard, along with former Barnstorm members Kenny Passarelli and Joe Vitale, and former James Gang members Jim Fox and Dale Peters. In a May 2012 interview with The Huffington Post (now called HuffPost), Walsh said about Lynne, “Gradually, we worked on some stuff and checked out some of his stuff too. It ended up that he really helped me finish it up and ended up producing. He really put his stamp on my music and took it in a direction I never would have gone, and I’m really grateful to him.” The album reached no. 12 on the Billboard 200. Here’s the title track co-written by Walsh, Drew Hester and Gannin Arnold.

To say Joe Walsh has had an eventful life would be an understatement. In addition to a 50-plus-year professional career, he has been married five times. His current wife is Marjorie Bach, sister of Barbara Bach and sister-in-law of Ringo Starr. Walsh battled alcohol and drug addiction for much of his early career but has been sober since 1995. In 1998, Walsh was inducted into the Rock and Roll Hall of Fame as a member of the Eagles. He is currently touring with the band in Europe. Starting in late September, they are playing three gigs at the MGM Grand Garden Arena in Las Vegas, during which they will perform Hotel California in its entirety, the band’s only scheduled dates in North America so far this year.

I just coincidentally came across this clip of Joe Walsh performing Funk #49. I love the tune’s guitar riff and just couldn’t resist posting it. Not sure what the deal was with Guitar Center, but who cares!

In my book, Joe Walsh is one of the coolest rock dudes on the planet and I definitely want to do more on him. Written by Walsh and his band mates Jim Fox and Dale Peters from James Gang, Funk #49 appeared on the band’s second studio album James Gang Rides Again from July 1970.

The band also released the song separately as a single, scoring one of their highest charting tunes in the U.S., which peaked at no. 59 on the Billboard Hot 100. It has since also become a staple during Walsh’s solo concerts and shows with the Eagles.