Just like the Fender Stratocaster, Gibson’s Les Paul is one of the defining electric guitars

As Jim, who writes the excellent Music Enthusiast blog, pointed out a couple of weeks ago after I had published my post about the Fender Stratocaster, I could just as well have called the Gibson Les Paul the model that embodies the electric guitar. I couldn’t agree more; in fact, I had planned all along to do a post on the Les Paul as well, so let’s get to it!

Obviously, the legendary guitar is closely associated with American guitarist, songwriter and inventor Les Paul. The origins of the electric guitar that would bear his name date back to 1940 when Paul built the so-called “Log” at the Epiphone guitar factory. The crude instrument, which consisted of a 4″ × 4″ chunk of pine wood with strings and a pickup, was one of the first solid-body electric guitars. To improve the look, Paul took the wings of an Epiphone archtop body and added them to the pine body.

When Paul offered his idea to the Gibson Guitar Corporation in 1941, they initially turned him down. That changed when rival Fender started marketing their Esquire model in 1950, a solid-body electric guitar that later turned into the Broadcaster and eventually the Telecaster.

After Gibson Guitar president Ted McCarty realized the enthusiasm about the Esquire and the Broadcaster, he asked Paul to become a consultant to the company. In 1951, Paul, McCarty and his team started developing a solid-body. While apparently there are differing recollections who contributed what, the result was the first Gibson Les Paul, introduced in 1952. Paul used it for the first time in public in June that year during a live performance at the Paramount Theatre in New York. 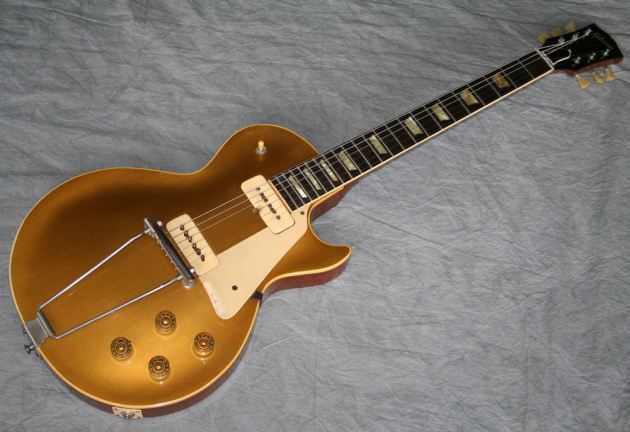 The initial Les Paul featured a mahogany body and neck, two P-90 single coil pickups and a one-piece, trapeze-style bridge/tailpiece with strings fitted under a steel stop-bar. In 1953, a second Les Paul model called the Les Paul Custom was introduced. A more important development happened in 1957, when Gibson introduced humbucker pickups on the Les Pauls. According to Wikipedia, a humbucker is a double-coil pick-up to cancel out the interference picked up by single-coil pickups, i.e., bucking the hum.

While the Les Paul models were formidable instruments, they were pretty heavy, which is why initially they weren’t widely embraced by guitarists. As a result, in 1961, Gibson introduced the Gibson SG, a lighter solid-body guitar that became the company’s best-selling model of all time. The company also stopped producing the traditional Les Paul.

Initially, Gibson launched the SG as the new Gibson Les Paul. But since the model had been developed without Paul’s knowledge and he was unhappy with the design, he requested that his name be removed from the headstock. Gibson agreed and Paul remained as a consultant with the company. Personally, I’ve always found the SG is a really cool looking guitar.

Ironically, a few years after production had been discontinued, Les Paul models started to become en vogue when guitarists like Keith Richards and Eric Clapton discovered and began using them. Other guitarists followed, such as Mike Bloomfield from the Paul Butterfield Blues Band and the Grateful Dead’s Jerry Garcia. Again reacting to popularity trends, Gibson reintroduced the Les Paul single cutaway guitar in July 1968. While there have been some tweaks over the years, the model remains in production to this day.

As indicated above, many guitarists have used Les Pauls. Following is a list of some of them.

The legendary session musician and lead guitarist of the Allman Brothers Band has used various Les Paul models. Here’s a great clip of the band’s epic live performance of Whipping Post at the Fillmore East in 1970. I believe Allman was playing a 1957 Les Paul Goldtop.

While Clapton is better known for Fender Stratocaster guitars, he has also used Gibson models, including a 1960 sunburst Les Paul and a 1957 goldtop Les Paul Custom. In 2010, Gibson announced the Clapton 1960 Les Paul Standard signature model, also known as the “Beano Burst.” Here’s a clip of Clapton playing his 1960 Les Paul.

Page has used various Les Paul models, including from 1959 and 1973. He also owned a modified 1960 Les Paul Custom “Black Beauty,” which was stolen in 1970 and has never been found. Gibson has produced three Jimmy Page signature models. In this clip from Led Zeppelin’s live performance of We’re Gonna Groove at London’s Royal Albert Hall in 1970, Page can be seen using a Les Paul.

Slash has used many different Les Paul models including his own custom shop Les Paul. Altogether, he has collaborated with Gibson on eight signature models. Here’s a clip of a 1988 Guns N’ Roses’ live performance of Sweet Child O’ Mine, featuring Slash on a Les Paul.

The Aerosmith lead guitarist has used many Gibson guitar models, including various Les Pauls. Gibson has released two Joe Perry signature Les Pauls, the first in 1996, the second in 2004. The latter is known as the Boneyard Les Paul. In the following clip of a live performance of Toys In the Attic, Perry is playing the Boneyard.

Moore played a Les Paul Standard. There were also two Gibson Gary Moore signature Les Pauls. Here’s the blues rocker and his Les Paul in action live with Walking By Myself.

Among other Gibson models, The Who guitarist used various customized Les Pauls from 1973 to 1979. In 2005, Gibson introduced three Townshend signature Les Paul Deluxe guitars, based on his heavily customized “#1” Wine Red 1976 Les Paul Deluxe, “#3” Gold top 1976, and “#9” Cherry Sunburst 1976. Here is a great clip of a 1978 live performance of Won’t Get Fooled Again, which became the closing scene of The Kids Are Alright rockumentary, in which Townshend plays one of his customized Les Pauls. Sadly, one of the most iconic moments in rock also captured the last performance of Keith Moon, who died in September that year.

Of course, this post would not be complete without a clip of the maestro himself, Les Paul. Not only does it show Paul perform one of his biggest hit singles, How High the Moon (1951), but he also demonstrates one of his inventions called Les Paulverizer. According to Wikipedia, the little device attached to his guitar allowed Paul to access pre-recorded layers of songs during live performance, so he could replicate his recorded sound on stage.