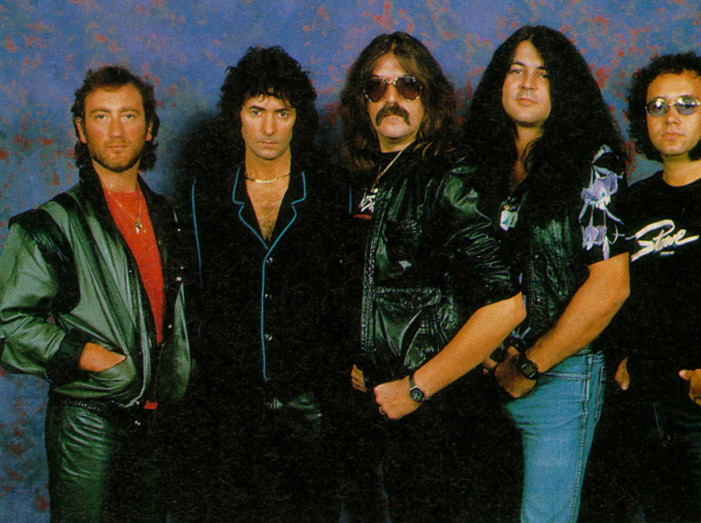 Deep Purple has been my favorite hard rock band pretty much since the time I started listening to music 40-plus years ago. When this morning Apple Music served up Machine Head, one of my longtime favorite albums, I listened to it again for what must have been the one millionth time or so – it just doesn’t get boring! While undoubtedly best known for Smoke On The Water, which features one of the most iconic guitar riffs in rock, and the kick ass Highway Star, the record has much more to offer than these two tracks. It gave me the inspiration to put together this post and playlist.

The origins of Deep Purple date back to 1967 when ex-Searchers drummer Chris Curtis envisaged forming a “supergroup” he wanted to call Roundabout. Jon Lord, a classically trained organ player, Nick Simper (bass) and Carlo Little (drums), who were all performing in the backing band for The Flower Pot Men, became Roundabout’s first members. The next to join was guitarist Ritchie Blackmore, after Simper and Little had suggested him.

Following Curtis’ was firing due to drug-induced erratic behavior, Blackmore and Lord took over artistically and replaced Little with Bobby Woodman on drums. An extended search for a lead vocalist led to Rod Evans in March 1968, who brought along drummer Ian Paice. This forced Woodman out and completed the band’s lineup. Roundabout soon became Deep Purple, a name suggested by Blackmore. The so-called Mark I formation of Blackmore, Lord, Paice, Simper and Evans went into the studio to record the band’s debut album Shades Of Deep Purple. It was first released in the U.S. in July 1968, followed by the UK in September that year.

The Mark I lineup released two additional records: The Book Of Taliesyn (U.S.: October 1968; UK: June 1969) and Deep Purple (U.S.: September 1969). In June 1969, Evans and Simper were fired and replaced by Ian Gillan and Roger Glover, respectively. The beginning of the Mark II lineup brought a change from progressive-oriented rock to a heavier sound, and the band’s commercial breakthrough with their fourth studio album Deep Purple In Rock. Mark II, which is my favorite lineup, issued three more records: Fireball (July 1971); Machine Head (March 1972), which became the band’s most commercially successful record; and Who Do You Think We Are (January 1973).

Following Who Do You Think We Are, Deep Purple went through various additional lineup changes and an eight-year hiatus from 1976 to 1984. The members of the Mark II lineup reunited twice, from 1984 to 1989, and from 1992 to 1993. Deep Purple, which have been on The Long Goodbye Tour since May 2017, continue to rock to this day. Last month, they announced a 25-city North American co-headliner with heavy metal outfit Judas Priest, which will kick off August 21 in Cincinnati and wrap up on September 30 in Wheatland, Calif.

Paice remains the only founding member in Deep Purple’s present lineup (Mark VIII), which also includes Glover, Gillan, Steve Morse (guitar, since 1994) and Don Airey (keyboards, since 2001). The current formation has been in place since 2001, making it the band’s most stable lineup. To date, Deep Purple have released 20 studio albums, the most recent being Infinite from April 2017, as well as numerous live and compilation records. Time to get to the playlist!

While Shades Of Deep Purple is best known for Hush, a song I’ve always liked, I’ve decided to highlight a different track called And The Address. This cool instrumental, which was co-written by Blackmore and Lord, is the album’s opener.

Why Didn’t Rosemary is another great early Deep Purple tune from the Mark I lineup. It appeared on the band’s eponymous third studio record from June 1969 and was credited to all members. On this tune, I particularly dig Blackmore’s guitar playing and Lord’s work on the Hammond.

One of my favorite Deep Purple songs to this day is Black Night, the first single released by the Mark II lineup and the band’s second overall. It came out in June 1970 just a few days after Deep Purple In Rock had appeared. It’s puzzling to me that the tune wasn’t included on the album. Like all of the songs released by the Mark II lineup, it was credited to all members of the band. The tune became a major hit for Deep Purple, climbing to no. 2 on the UK charts – their highest peaking UK single to this day.

Speaking of Deep Purple In Rock, here is the epic Child In Time. To me Gillan’s singing and Lord’s keyboard work are the outstanding features of the tune. It gives me goosebumps every time I listen to it.

When it comes to Machine Head, I find it hard to pick a tune. Sure, Highway Star or Smoke On The Water would be obvious choices, and I certainly dig both of these songs – and tortured my poor parents playing along on the electric guitar as a teen – of course, with full distortion and the volume of my tiny home amp put to the max! But instead, I’d like to highlight Pictures Of Home. Why? Because I think Blackmore’s guitar riff is pretty cool, plus I dig Glover’s bass solo. I also like Paice’s intro. I think these are more than enough reasons.

Who Do You Think We Are was the final album of Mark II’s initial run. Here’s the great opener Woman From Tokyo – love that honky tonk piano solo starting at around 4:12 minutes.

Burn was Deep Purple’s eighth studio album and first of the Mark III formation featuring David Coverdale and Glenn Hughes on vocals and bass, respectively, replacing Gillan and Glover. Coverdale, who in 1978 became the lead singer of Whitesnake (and still is to this day after several departures and returns), is a fine rock vocalist but Gillan will always remain my favorite Deep Purple lead vocalist. Anyway, here is the album’s title track.

Perfect Strangers marked the triumphant return of Deep Purple after their 1976-1984 hiatus. It was also the first reunion of the Mark II lineup. Here’s the album’s title track. Portions of the instrumental parts are a bit reminiscent of Led Zeppelin’s Kashmir.

In my opinion, Perfect Strangers was the last great Deep Purple album. I still want to acknowledge some of the band’s music that followed. First up: the title track of their 14th studio record The Battle Rages On, which came out in July 1993. It was the first and only record released during the second reunion of the Mark II lineup. During the tour that followed in support of the album, Blackmore left the band for good.

For the last tune of this playlist I’d like to jump to Deep Purple’s most recent record Infinite. Here is the opener Time For Bedlam, which also became the album’s lead single. While clearly not being Machine Head caliber, it proves the band still knows how to kick ass. Airey and Morse do a fine job on keyboards and guitar, respectively.

Deep Purple have sold more than 100 million albums worldwide, making them one of the most commercially successful rock bands. In 2016, the band (Blackmore, Lord, Paice, Gillan, Glover, Coverdale, Evans and Hughes) was inducted into the Rock & Roll Hall of Fame. Among their other accolades is a listing in the 1975 Guinness Book of World Records as the “globe’s loudest band,” based on a 1972 concert at the Rainbow Theatre in London, England.