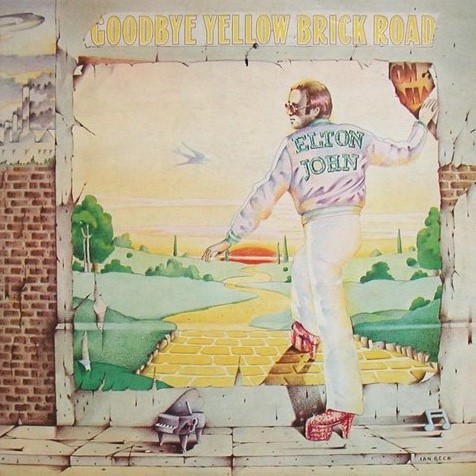 While I became aware of Elton John more than 40 years ago and have listened to him on and off ever since (admittedly more off for the past three decades), I mostly know him based on specific songs. Except for John’s 1983 album Too Low for Zero, which I really dug at the time and still enjoy to this day, I haven’t explored his albums in greater detail. This occurred to me the other day when I put together a post on Elton John rockers.

I always had been more fond of John’s earlier songs, so perhaps not surprisingly, once I decided to further explore his albums, it made the most sense to me to start looking at his releases from the first half of the ’70s. From there, it didn’t take long to get to Goodbye Yellow Brick Road and realize why it’s widely considered to be John’s best album.

By the time Goodbye Yellow Brick Road was released in October 1973, John had established himself as one of the most successful pop music artists of the ’70s. With predecessors Honky Château and Don’t Shoot Me I’m Only the Piano Player, he already had two internationally successful studio records under his belt that had generated hits like Rocket Man, perhaps my favorite Elton tune, Crocodile Rock and Daniel.

Appearing only nine months after Piano Player, Goodbye Yellow Brick Road came together during what arguably was the most productive period for John and his close partner in crime, lyricist Bernie Taupin. They had a total of 22 tracks, for which Taupin wrote the lyrics in just two and a half weeks while John composed most of the music in a whopping three days. Narrowing down the songs to 18 tracks still meant there were too many to fit on one LP. That’s why the album became a double LP, marking the first of John’s four such studio releases.

Inspired by The Rolling Stones’ Goats Head Soup, John wanted to record the album in Jamaica. Production there started in January 1973, but things became quickly hampered by technical challenges with the sound system and the studio piano, along with external distractions, including a professional box fight and political unrest. Work was speedily shifted to Studio d’enregistement Michel Magne at Château d’Hérouville located in the northwestern suburbs of Paris, France, where John had recorded his two previous above noted albums. The last-minute studio change apparently didn’t have a negative impact: Goodbye Yellow Brick Road was recorded in just two weeks. Time for some music!

I’d like to kick things off with the magnificent opener Funeral for a Friend/Love Lies Bleeding. The first part is an instrumental of music John felt he’d like to be played at his funeral – one wonders a bit in what state of mind he was! It’s followed by Love Lies Bleeding, which Songfacts describes as an angry song about a broken relationship. Had it not been fused together with Funeral, something producer Gus Dudgeon had come up with, I would have included Love Lies Bleeding in my previous post about great Elton John rockers. While due to the total length of over just 11 minutes the track initially wasn’t released as a single, it became a fan favorite and staple of John’s live set lists. It’s easy to understand why!

I could easily fill up the remaining post with just the hits the album generated: Saturday’s Night’s Alright for Fighting, Goodbye Yellow Brick Road, Bennie and the Jets and Candle in the Wind. The one I really cannot ignore is the title track, another contender for my all-time favorite Elton song. According to Songfacts, the yellow brick road is an image taken from the movie The Wizard of Oz, and it was rumored the ballad is about Judy Garland. But instead the song seems to be about Taupin. Songfacts: The lyrics are about giving up a life of opulence for one of simplicity in a rural setting. Elton has enjoyed a very extravagant lifestyle, while Taupin prefers to keep it low key.

Grey Seal initially was recorded for John’s eponymous sophomore studio album from April 1970, but the tune didn’t make the record. Songfacts notes Taupin has said that it’s one of the songs he wrote with lyrics he never really understood, but somehow work. As for Elton, the song is one of his favorites, as he loves the way the music matches up to the lyrics. In the tradition of “A Whiter Shade Of Pale,” the lyrics form a series of images that are open to translation. Elton called it “Procol Harum-ish absurd, like a Dali painting.” I love this tune and can easily see why it appealed so much to John.

Next up is Sweet Painted Lady, a deeper cut from the album. From Songfacts: Written in the style of the British composer Noël Coward, this song is about sailors back from the sea and the “sweet painted ladies” – prostitutes – waiting for them at harbor brothels.

Let’s do one more: Harmony, the album’s closer, and a track that had been considered as a single. But the timing was deemed too close to Don’t Let the Sun Go Down on Me, the lead single to John’s follow-on album Caribou. Instead, Harmony became the B-side to the U.S. version of the Bennie and the Jets single. Songfacts notes the tune gained a fervent following, especially on the New York City radio station WOR, it won the “Battle of the Hits,” voted on by listeners, for 33 consecutive weeks.

Goodbye Yellow Brick Road became Elton John’s best-selling studio album. In February 2014, it reached 8x Platinum certification in the U.S. In 2003, the album was inducted into the Grammy Hall of Fame. It’s also included in Rolling Stone’s list of 500 Greatest Albums of All Time. In the most recent revision from September 2020, Goodbye Yellow Brick Road held up pretty well, coming in at no. 112, down from 91 in the corresponding lists for 2012 and 2003. 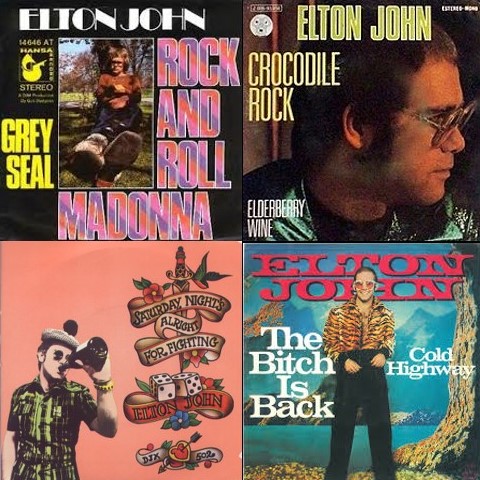 Elton John and his lyricist Bernie Taupin primarily are known for great pop songs they wrote, especially during John’s most productive period during the first half of the ’70s. Your Song, Rocket Man, Daniel and Goodbye Yellow Brick Road are some that come to mind. Occasionally, they also came up with more rock-oriented tunes. I thought it would be fun to put together a playlist focused on the latter.

Rock and Roll Madonna was released as a non-album single in Britain in June 1970. It didn’t chart. Even though the beginning and the end sound like a live recording, the audience noise was added, a technique John would use again some four years later for Bennie and the Jets, one of his various chart toppers in the U.S. and Canada during the 70s. Rock and Roll Madonna featured Deep Purple bassist Roger Glover.

Crocodile Rock first appeared in October 1972 as the lead single for John’s sixth studio album Don’t Shoot Me I’m Only the Piano Player from January 1973. The tune, which has a late ’50s and early ’60s flair, became John’s first no. 1 single in the U.S. In 1974, a lawsuit alleged John and Taupin had illegally copied the falsetto of Speedy Gonzalez, a song that been popularized by Pat Boone in 1962. The case was settled out of court.

Saturday Night’s Alright for Fighting perhaps is my favorite rocker by Elton John. It appeared on the excellent Goodbye Yellow Brick Road, his seventh studio album from October 1973. It also was released separately in June that year as the lead single. The tune prominently features Scottish rock guitarist Davey Johnstone, a longtime collaborator who had become a full-time member of John’s band for his fifth studio album Honky Château released in May 1972.

The Bitch Is Back

Another nice rocker is The Bitch Is Back – sounds like it could be the title of Stones song. The tune was recorded for John’s eighth studio album Caribou from June 1974. It also became the record’s second single in August of the same year. Dusty Springfield sang backing vocals.

Obviously, Pinball Wizard isn’t a John-Taupin song, but I just couldn’t leave it out. I almost like this excellent cover better than the original by The Who. When I heard John’s version for the first time, I thought this is how Pete Townshend should have written this rock gem instead of what feels like arbitrarily fading out the song at less than 3 minutes. John’s cover is part of the soundtrack for the 1975 film version of Tommy, in which he also starred, along with numerous other music artists like Eric Clapton, Tina Turner and the members of The Who.

(Gotta Get A) Meal Ticket

Two months after the film version of Tommy had been released, John’s ninth studio album Captain Fantastic and the Dirt Brown Cowboy appeared in May 1975. It features (Gotta Get A) Meal Ticket, another great rock tune.

Grow Some Funk of Your Own

The ’70s were a very productive period for John, especially the first half, during which he released nine albums. Rock of the Westies was John’s second studio record in 1975, which appeared in October that year, only five months after Captain Fantastic and the Dirt Brown Cowboy. Here’s Grow Some Funk of Your Own, for which Davey Johnstone received a co-writing credit. The song was also released separately in January 1976 and became the album’s second single.

I’d like to wrap up this playlist with the only track that’s not from the ’70s: I’m Still Standing, from Too Low for Zero, John’s 17th studio album that appeared in May 1983. Coming on the heels of four less successful records, especially compared to his releases during the first half of the ’70s, Too Low for Zero marked a comeback. It ended up being John’s best-selling album of the ’80s. I did like it at the time and still do. Here’s I’m Still Standing.

A look back on Live Aid benefit concert – Part 2 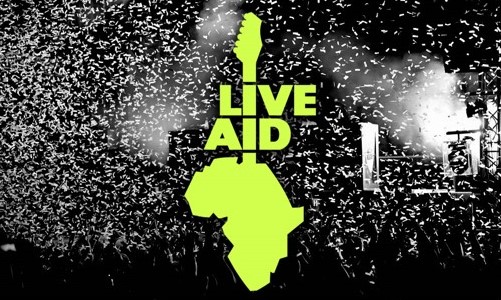 Here’s Part 2 of my mini-series recalling musical highlights from the Live Aid concert that took place on July 13, 1985. Like in the first part, the footage in this post was all captured at Wembley Stadium in London, England. The next installment is going to feature clips from John F. Kennedy Stadium in Philadelphia, the second stage of the music marathon.

One of Live Aid’s definitive moments was the performance by Queen. Freddie Mercury once again vividly illustrated he was a born live performer and showman, and the rest of the band was on fire as well. Here’s We Are the Champions, the closer of Queen’s mini set. Written by Mercury, the tune combined with We Will Rock You was the lead single of the band’s sixth studio album News of the World. Both appeared in October 1977, with the single predating the album by two weeks.

It kind of must have sucked having had to follow Freddie Mercury, especially after that performance. The Who, who had reunited for Live Aid following their breakup in December 1983, proofed they were up to challenge. Roger Daltrey, Pete Townshend and John Entwistle, together with Kenny Jones and John Bundrick on drums and keyboards, respectively, were in decent shape. Here’s the mighty Townshend-penned Love, Reign O’er Me from Quadrophenia, the sixth studio album by The Who released in October 1973. And, yep, the chap announcing them is Jack Nicholson, who I guess was so excited he literally read everything from a piece of paper. 🙂

Let’s wrap up this second part with some Elton John. Bennie and the Jets, composed by John with lyrics from Bernie Taupin, first appeared on his seventh studio album Goodbye Yellow Brick Road that came out in October 1973. The song was also released separately as the record’s third single in February 1974. Nice performance by John who had staged a comeback in 1983 with his great album Too Low for Zero, though seeing him without flashy glasses is unusual.