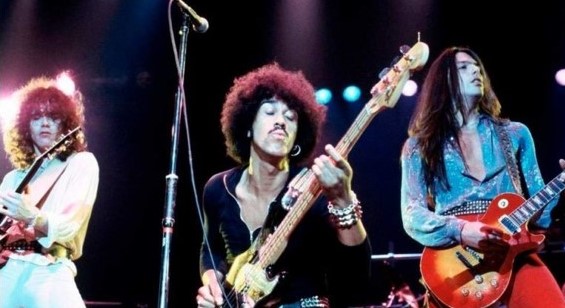 While I wouldn’t call myself an all-out Thin Lizzy fan, I dig many of the Irish rock band’s songs I know and definitely feel they would have deserved getting into the Rock and Roll Hall of Fame. Also, how many rock bands can you name that were fronted by a kick-ass black bassist and lead vocalist? Wikipedia calls Phil Lynott the “first black Irishman to achieve commercial success in the field of rock music.” While I’m not sure how many other black rock artists come from Ireland, Thin Lizzy were more than just a multi-cultural band. They also transcended religious division, featuring both Catholic and Protestant members during the period of the Northern Ireland conflict. Before getting to some of Thin Lizzy’s music, a few words about their history are in order.

Thin Lizzy were founded in December 1969, when former Them members guitarist Eric Bell and keyboard player Eric Wrixon met drummer Brian Downey and vocalist and songwriter Phil Lynott in a Dublin pub. Downey and Lynott were performing there with their band Orphanage. Wrixon exited before Thin Lizzy released their debut single The Farmer. After the band (then a trio) had signed with Decca Records at the end of 1970, they recorded their eponymous debut album that appeared in April 1971. Subsequently, except for Lynott and Downey, the band had many different members that notably included guitarist Gary Moore from 1974 to 1977 and 1978 to 1979.

In November 1972, Thin Lizzy scored their first hit with the non-album single Whiskey in the Jar, an Irish traditional song that had first been popularized in 1968 by Irish folk band The Dubliners. I still remember that song received a good deal of radio play in Germany during the ’70s and for a long time was the only Thin Lizzy tune I knew. After their initial success, the band lost momentum, and it took them three more years to have their first charting album in the UK, Fighting, released in September 1975. The follow-on Jailbreak from March 1976 finally brought commercial breakthrough and chart success in both the U.K. and the U.S. where the album peaked at no. 18 on the Billboard 200.

Until their breakup in August 1983, Thin Lizzy recorded six more studio albums. Lynott who had released two solo records in 1980 and 1982 went on to form rock band Grand Slam. They didn’t manage to secure a recording contract and folded in late 1984. On January 4, 1986, Lynott passed away at the age of 36 from pneumonia and heart failure due to septicemia. In 1996, John Sykes, one of the guitarists in Thin Lizzy’s final lineup, decided to revive the band as a tribute. They conducted various tours over the years until Sykes’ departure in June 2009. Shortly thereafter, Scott Gorham who had played guitar with Thin Lizzy since 1974, started putting together another lineup. In 2012, Thin Lizzy offspring Black Star Riders was formed to record new material. Thin Lizzy has continued to gig occasionally, most recently last summer. Time for some music!

Let’s kick it off with Whiskey in the Jar. The song’s great twin lead guitar parts were one of the features that attracted me to Thin Lizzy. I still dig that sound. Apparently, the band wasn’t happy about Decca’s release of their cover of the tune, feeling it did not represent their sound.

Here’s a nice rocker appropriately titled The Rocker. Co-written by Bell, Downey and Lynott, the song was included on Vagabonds of the Western World, Thin Lizzy’s third studio album that came out in November 1973 in the wake of the Whiskey in the Jar single. Unlike that tune, The Rocker only charted in Ireland where it went to no. 14.

Next up: Rosalie, the great opener to Thin Lizzy’s fifth studio album Fighting. The track was written by Bob Seger who first recorded it on his 1973 album Back in ’72.

The follow-on album Jailbreak became Thin Lizzy’s best-selling record and also their highest-charting in the U.S. Undoubtedly, that performance was fueled by the classic The Boys Are Back in Town, which remain a staple on classic rock rock to this day. Written by Lynott, the band’s most successful single is another beautiful example of their seductive twin lead guitar sound.

The soulful Dancing in the Moonlight (It’s Caught Me in Its Spotlight) is another Lynott tune I dig. It appeared on Thin Lizzy’s eighth studio album Bad Reputation from September 1977. The saxophone part was played by Supertramp saxophonist John Helliwell. Call me crazy, I can hear some influence from Irish fellow artist Van Morrison.

Black Rose: A Rock Legend, released in April 1979, was the only Thin Lizzy album featuring Gary Moore despite his two stints with the band. Here’s opener and lead single Waiting for an Alibi written by Lynott. I like the tune’s driving bass line, and these twin lead guitar parts never get boring. It became one of the band’s most successful singles, reaching no. 9 in the UK and no. 6 in Ireland.

How about two more songs? First is Killer on the Loose, another Lynott composition released in September 1980, just ahead of Thin Lizzy’s 10th studio album Chinatown that appeared the following month. Perhaps not surprisingly, the song’s lyrics and video, in which Lynott took the persona of a Jack-the-Ripper-type serial killer, created controversy. It probably didn’t help that the single coincided with a string of murders by an English serial killer called the Yorkshire Ripper. But one thing is for sure – chart performance didn’t suffer. The band scored another top 10 hit in the UK and a no. 5 in Ireland.

The last tune I’d like to call out is Cold Sweat. Co-written by Lynott and Lizzy guitarist John Sykes, it was included in the band’s final studio record Thunder and Lightning from March 1983. Here’s a clip from Thin Lizzy’s supporting farewell tour.

The Rock & Roll Hall of Fame has unveiled the class of 2020 nominees. Inevitably, this will respark the annual debate whether artists who fall outside the rock genre like Whitney Houston, The Notorious B.I.G. or Rufus Featuring Chaka Khan should have been nominated in the first place, or why certain rock bands or artists who have been eligible for many years once again did not make the class. But despite all the Rock Hall’s imperfections, the music nerd in me still gets excited. Following are the artists I dig the most among the nominations.

If you glanced at the subhead of this post, you already know where I’m going with this. Ladies first: Pat Benatar. Having been eligible since 2004, Benatar is one of the great female rock vocalists in my book. According to her bio published on the Rock Hall’s website, Benator is a classically trained mezzo-soprano who quit her job in 1971 to pursue a career in singing. In 1979, she met guitarist Neil Giraldo, and the two formed a long-lasting duo, established their own entertainment company, and are still performing to this day. Here’s Heartbreaker from Benatar’s debut album In The Heat Of The Night, which was released in August 1979. Co-written by Geoff Gill and Cliff Wade, the tune was her breakthrough single, climbing to no. 23 on the Billboard Hot 100. The clip, which is from Benator’s 35th anniversary tour that took place in 2015, also throws in Ring Of Fire by Johnny Cash – fun to watch!

T. Rex, initially called Tyrannosaurus Rex, were formed as a psychedelic folk rock group by singer-songwriter and guitarist Marc Bolan in 1967. In 1970, the band changed their name to T. Rex and began their transition toward glam rock, which first was on full display on their sixth studio album Electric Warrior from September 1971. The band went on to record six more albums until Bolan’s untimely death in a car accident in September 1997, just two weeks prior to his 30th birthday. T. Rex had many members over the years. From the line-up that existed at the time of Bolan’s death, it appears only Herbie Flowers (bass) and Tony Newman (drums) are still alive. Here’s what’s perhaps the band’s best known song, Get It On. Written by Bolan, it appeared on the Electric Warriors album. T. Rex have been eligible for the Rock Hall since 1993.

Next up: Thin Lizzy, a great band formed in Dublin, Ireland in 1969, who has been eligible for a nomination since 1996. In particular, I dig them for their twin lead guitar harmonies. Until the band’s breakup in September 1983, Thin Lizzy released 12 studio albums. In January 1986, co-founding member, bassist, lead vocalist and principal songwriter Phil Lynott, who had been the group’s de facto leader, passed away from pneumonia and heart failure caused by sepsis. In March 1996, guitarist John Sykes, who had been part of Thin Lizzy’s final line-up, decided to revive the band. While he is no longer part of it, the group remains active to this day. Essentially, they are performing as their own tribute and except for a few live albums have not released any new records. In addition to their great guitar sound, one of the cool things about Thin Lizzy was the band’s interracial aspect – Lynott’s father was from British Guiana. His mom was from Dublin. The Boys Are Back In Town from Jailbreak, Thin Lizzy’s sixth studio album that appeared in March 1976, is a great example of the aforementioned twin lead guitars. On this song, they were played by Brian Robertson and Brian Downey.

As more frequent visitors of the blog know, I’m a fan of The Dobbie Brothers, so I was particularly pleased to see their nomination. The band had been eligible since 1996. What always attracted me to the Dobbies, which were founded in San Jose in 1970, was the combination of rock and their amazing three-part harmony singing. Two of the original vocalists, Tom Johnston (guitars, vocals, harmonica) and Patrick Simmons (guitar, vocals), remain part of the band’s current line-up. John McFee (guitars, pedal steel, violin, harmonica, vocals) has been a part of the group since 1979. I’ve seen the Dobbies twice over the past 20 years, most recently last year, and they still sound phenomenal. While I generally prefer the band’s early phase, here’s a great rocker from their 10th studio album Cycles released in May 1989: The Doctor, a tune co-written by Johnston, Charlie Midnight and Eddie Schwartz. The clip was captured during a concert in April 2017.

The induction ceremony will be held at Public Auditorium in Cleveland, Ohio on May 2, 2020. It will be preceded by induction week with celebratory events and the opening of the 2020 inductee exhibit. Music fans can vote once a day from now on through January 10, 2020 and pick up to five nominees per ballot. The top five artists will comprise a “fans’ ballot” that will be tallied along with the other ballots to choose the 2020 inductees.