My latest exploration of newly released music includes songs from rock veterans Pretenders and three other artists most readers likely don’t know. Highlighting work from the latter really is what mostly inspired me to introduce this recurring feature six weeks ago, since it’s fair to say the blog mostly focuses on prominent acts. Let’s get to it!

Initially, the 11th studio album by the Pretenders was scheduled to be released yesterday, May 1. Because of COVID-19, Hate for Sale (gee, what a cheerful title!) is now slated for July 17. Interestingly, if I see this correctly, their 5-month North American tour with Journey has not been postponed yet and is still scheduled to kick off in Ridgefield, Wash. on May 15. Remember, that’s the one of the first states that became a hotspot for the coronavirus when it wrecked havoc at the local nursing home? Hate for Sale is the Pretenders’ first new album as a band since Break Up the Concrete from October 2008. In October 2016, Chrissie Hynde released the aptly titled Alone under the Pretenders name, but it only featured her with different backing musicians. In addition to Hynde (guitar, vocals), the Pretenders’ current line-up includes co-founding member Martin Chambers (drums), as well as Carwyn Ellis (keyboards), James Walbourne (guitar) and Nick Wilkinson (bass), who all joined sometime after 2000. Released on April 14, You Can’t Hurt a Fool is the third and most recent single from the album. Like all other tunes on Hate for Sale, the ballad was co-written by Hynde and Walbourne.

Robert Francis is a singer-songwriter from Los Angeles in the indie folk and Americana arena. He released his debut album One by One at age 19 in August 2007. Junebug, the lead single for his sophomore Before Nightfall from October 2009, became successful in Europe, topping the French charts and also charting in various other European countries. Amaretto, Francis’ eighth album, came out yesterday. It features notable guests: Ry Cooder, Marty Stuart and Terry Evans who since passed away. This means that at least some of songs must have been recorded as ealy as 2017, since Evans died in January 2018. Here’s the title track. If you dig Americana, I’d encourage you to check out this tune and the entire album.

In February 2015, Sawyer Fredericks, a soft-spoken 16-year-old teenager from Newtown, Conn., became the youngest winner of The Voice at the time. Meanwhile, that record was broken by a 15-year-old female vocalist in February 2018. Since I dig good vocals, I was watching the TV singing competition frequently back then. About a year or two ago, I stopped since I felt everything had become too predicatble. Unlike American Idol, which sparked the careers of some big-selling artists, such as Kelly Clarkson, Carrie Underwood and Adam Lambert, most winners of The Voice haven’t accomplished real breakthroughs. As such, I’m particularly happy to see a previous winner who went on to become a recording artist. Since The Voice, Fredericks has released an EP and four albums, including his latest Flowers For You, which appeared yesterday. The now 21-year-old singer-songwriter definitely has something. Not only is Fredericks a pretty talented musician, but his voice is quite unique, varying from a deeper raspy sound to a very high range. And the young artist writes pretty good songs. Here’s the bluesy title track from the new album.

Resurrextion are a New Jersey jam rock band I follow. Full disclosure: I’m also friends with these guys, but that’s not the reason why I feature them – in fact, they have no idea (yet) that I do. Resurrextion were initially founded in Jersey City in 2006 and started out as a cover band. After beginning to work on own material, they released their studio debut Comin’ Home in 2013. As the band gained more visibility and opened for national acts like Dickey Betts, Foghat, Poco and Blues Traveler, music increasingly started to interfere with their day jobs and families, so they decided to take a break. In 2018, they reunited and have since performed at many Jersey venues in Asbury Park and beyond. Resurrextion mostly remain a jam rock cover band but also play their own songs – and evidently work on new material. The current lineup includes Phil Ippolito (lead vocals, keyboards),  Joey Herr (guitar, vocals), Billy Gutch (guitar, vocals), Lou Perillo (bass, vocals) and Johnny Burke (drums, vocals). Hold On is a mid-tempo rock tune the band released last month, while laudably practicing social distancing. Each member recorded their part at their respective homes. Thanks to technology, I think everything came nicely together!

Journey, one of my favorite rock bands, joins a long list of music artists to receive one of music’s biggest honors. 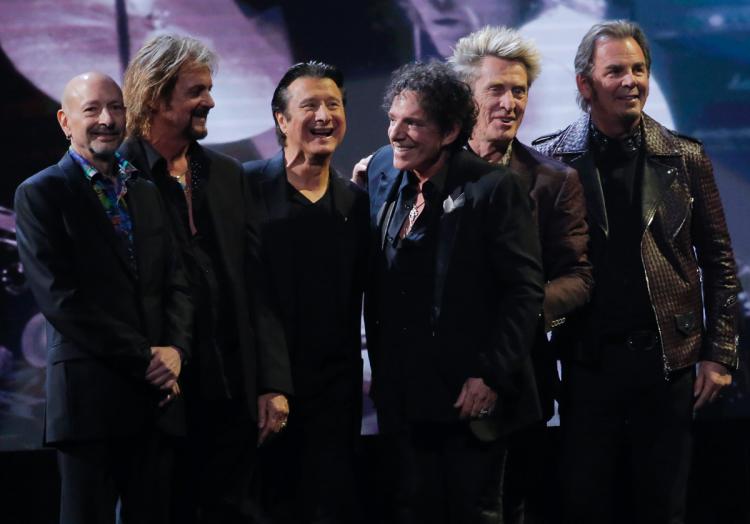 Friday night (April 7) was the moment Neal Schon thought would never come. Journey was inducted into the Rock & Roll Hall of Fame. And what initially had looked like against all odds, Steve Perry joined his former band mates on stage to accept the honor, marking his first appearance with Journey in 26 years. Though some rumors persisted until the last minute, he did not perform.

While Journey had become eligible for the Rock & Roll Hall of Fame more than 15 years ago, they were only nominated last year and made it in right away. That’s unlike many other inductees, who had been eligible for even longer periods and/or been nominated multiple times prior to their induction.

Sadly, the induction ceremonies are notorious for drama surrounding former and present members of bands. More recent examples include Chicago and Peter Cetera, and Deep Purple and Ritchie Blackmore. Journey was no exception, though in their case, the outcome was mostly a happy end!

A certain degree of creative tension in a band can help their music evolve, so it’s not an inherently bad dynamic. But unfortunately, all too often such differences turn personal and bring out big egos. Ironically, for many bands this seems to happen after they become successful. When more is at stake, all the brotherhood and time and effort to get to that stage seem to be forgotten!

Steve Perry clearly was bitter when Journey continued to travel without him in 1998. Following the band’s recording of their 1996 reunion album Trial by Fire, Perry suffered a hip injury in Hawaii. He was told it required hip replacement surgery. This put the band’s planned tour in support of the album on hold. After Perry had refused to undergo the procedure for 17 months, Schon and keyboarder Jonathan Cain lost their cool. They told him to either get under the knife so Journey could resume touring upon his recovery, or they would look for a new singer. Perhaps not surprisingly, Perry was taken aback by this ultimatum and decided to leave the band. 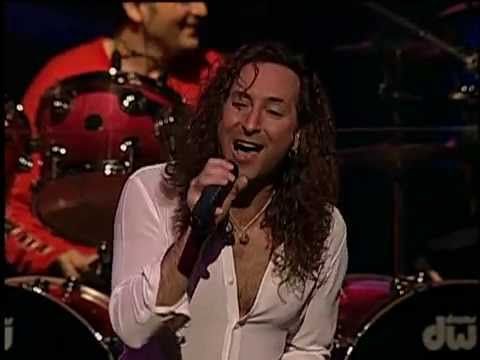 Journey went on to hire Steve Augeri as their new lead singer and also replaced Steve Smith on drums with Deen Castronovo, who Schon and Cain had known from their common time with Bad English. I saw that lineup of Journey in the late 90s and was really impressed. I had doubts it was possible to replace Perry, who in his prime time had a voice like no other rock singer. But Augeri sounded surprisingly similar to Perry, and he also did an incredible job hitting and holding these impossibly high notes. From my distant vantage point, he even looked a bit like Perry – frankly, it was almost a bit creepy!

Unfortunately, belting out Journey songs and hitting these crazy high notes night after night took a toll on Augeri’s voice. First challenges started to emerge in 2003, and in 2006, he was dropped from the band. The officially stated explanation was a “chronic throat infection.” For some time, Jeff Scott Soto from Swedish hard rock band Talisman filled in on lead vocals. Finally, in the summer of 2007, Cain and Schon found Arnel Pineda on the Internet. The Filipino singer had been a big Journey fan and performed some of their songs with his cover band The Zoo, which were posted on YouTube – what an incredible story!

I also saw the current Journey lineup with Pineda last April in a superb double bill with the classic Santana band – one of only a handful of gigs the two bands did together. The show predated my blog, so I never got to write a review. In a nutshell, it was absolutely amazing seeing guitar legend Carlos Santana reunite with Schon, Gregg Rollie and other members of the classic Santana band, and playing iconic tunes from their first three albums, as well as their then-new release, Santana IV. Journey’s set was also fantastic, and Pineda did an amazing job on lead vocals.

Back to the induction ceremony. Journey played three of their best known songs, all from the Perry era, their most commercially successful period: Lights (Infinity, 1978), Don’t Stop Believin’ (Escape, 1981) and Separate Ways (Frontiers, 1983). After reports had emerged that Perry would be there, naturally, fans didn’t stop believin’ he’d also perform. In a couple of interviews leading up to the big night, Schon seemed to be very open about the idea; recognizing Perry’s vocal abilities have changed, he also offered to lower the key of one of their songs.

While it’s sad Perry ended up not performing, especially for Journey fans, I think he deserves a lot of credit for joining his former band mates on stage and giving a very gracious speech. I thought one the high points was when he called out Pineda: “I must give a complete shout out to someone who sings his heart out every night, and it’s Arnel Pineda…To Arnel, I love you.” While Perry certainly couldn’t blame Pineda for his painful departure from Journal, putting aside all his past bitterness and showing up for the fans really was a class act!

Following are excerpts from the remarks from some of the other Journey inductees, as reported by Rolling Stone:

Schon: “Steve Perry [Applause] If it wasn’t for him, there would be no Journey. [Former Journey manager] Herbie Herbert, thank you from the bottom of my heart, for finding me after Gregg was picking me up in high school when I was 15. Soon after that, I was in the Santana group.”

Rolie: “This is my second trip here. And what a trip this has been. First Santana, Journey, Ringo Starr [since 2012, Rolie has been a member of Ringo’s All-Star Band] and back here with Journey…And Neal Schon…saving me from the restaurant business. Don’t ever do it. Just start Journey.”

Steve Smith: “I’ve started out in 1963 at nine years old as a jazz drummer…it wasn’t until 1969 that I discovered rock & roll…As disc jockey Alan Freed, Rock & Roll Hall of Fame inductee once said, “Rock & Roll is really swing with a modern aim. It began in the levies and in the plantations, and featured blues and rhythm.” He said this in the 1950s.”

In addition to Perry, Schon, Rollie and Smith, Journey inductees included current keyboarder and bassist Cain and Ross Valory, respectively, as well as Aynsley Dunbar. Dunbar was the drummer on Journey’s first four albums Journey (1975); Look Into the Future (1976); Next (1977); and breakthrough Infinity, the only overlap with Perry. Since Pineda only joined Journey in 2007 and as such was not eligible yet, he wasn’t inducted.

Here’s a clip of Journey’s performance of Don’t Stop Believin’ during the induction. It doesn’t do great justice to the band’s sound and Pineda’s outstanding voice the way I remember it from last year, but it’s the best footage I could find.

Excerpts from the induction will be shown on HBO on April 29 at 8:00 PM ET/PT. It should be awesome!