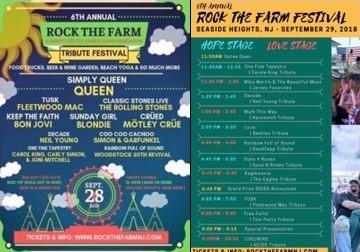 Today would have been the 7th annual Rock the Farm festival, a great music tribute event conducted each year in the New Jersey shore town of Seaside Heights. But in light of the seemingly never-ending COVID-19 pandemic, the organizers made the responsible decision to cancel, hoping they can bring back the 11-hour music marathon in 2021.

I think the idea behind Rock the Farm is ingenious: Imagine an iconic music festival that could never happen in reality and bring it to life with compelling tribute acts and raise money for a great cause in the process! It’s almost like a mini Live Aid, except of course The Beatles or The Doors could have never have shared a bill with the Eagles, Guns N’ Roses or Tom Petty.

The event is organized by Jersey non-profit community organization CFC Loud N Clear Foundation, which offers post-rehab support programs to individuals and families struggling to overcome addiction to opioids, alcohol and other substances. Rock the Farm serves as their main annual fundraiser.

I realize that unless you are from Jersey and/or have been to the festival, this is a bit of an inside baseball post. But as more frequent visitors of the blog may recall, I dig seeing tribute bands, especially when they are of the high caliber Rock the Farm has attracted over the years. This year would have been my fourth time in a row to attend. Instead, I’m taking a look back at highlights from the past two years.

Let’s kick things off with a Guns N’ Roses tribute band from Dallas called Guns 4 Roses. While I haven’t found any information on when they were formed, their website lists gigs going back to 2009. Here’s their rendition of Sweet Child O’ Mine captured at Rock the Farm 2018.

The headliner at Rock the Farm 2018 were Live/Wire, a kickass AC/DC tribute from New York. Founded in 2000, the band includes Mike Hughes (as Angus Young, lead guitar), Bill Voccia (as Malcolm Young, rhythm guitar), Chris Antos (as Bon Scott and Brian Johnson, lead vocals), Bill ‘Daytona’ Bowden (as Cliff Williams, bass) and Billy Rauff (as Phil Rudd, drums). Based on their current schedule, the band’s touring radius appears to be the eastern half of the U.S. Here’s It’s a Long Way to the Top (If You Wanna Rock ‘n’ Roll). Despite some apparent technical issues with the bagpipe, it’s a pretty cool rendition.

One Fine Tapestry are a tribute to Carole King, one of my favorite singer-songwriters. At the core of this act are Gerard Barros and Diane Barros, a New Jersey-based versatile husband and wife duo performing a variety of different shows. At Rock the Farm 2019, they were backed by a full band. Here’s their rendition of King’s Sweet Seasons.

Always fun to watch are Rolling Stones tribute The Glimmer Twins from Philly. Named after the songwriting partnership of Mick Jagger and Keith Richards, this band is led by Keith Call (vocals, harp) and Bernie Bollendorf (guitars, vocals), who bring to life the sound and looks of Jagger and Richards in the ’70s. While the band’s remaining musicians don’t resemble the other members of The Rolling Stones, they sound fantastic: Michael Rubino (guitars), Bobby Corea (drums), Rob Ekstedt (Bass), Rocco Notte  (keyboards), Valorie Steel (vocals) and Bobby Michaels (saxophone, flute, organ). Check ’em out with Can You Hear Me Knocking.

The final band I’d like to highlight in this look back were the headliner last year: Simply Queen. This Canadian tribute to Queen, which has been around for 15 years, features Rick Rock (as Freddie Mercury), Bob Wegner (as Brian May), Phil Charrette (as Roger Taylor) and Mitch Taylor (as John Deacon). While Simply Queen mostly perform in Canada, they venture out to the U.S. fairly frequently. Here’s a nice rocker called It’s Late.