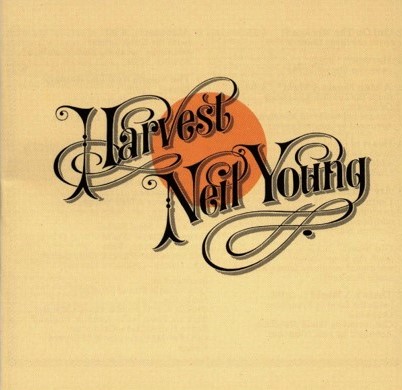 On February 1, 1972, Neil Young released his fourth studio album Harvest. The 50th anniversary of what is among my all-time favorite Young records almost escaped my attention. I mistakenly had assumed the release date was February 14.

Young recorded Harvest following the breakup of Crosby, Stills, Nash & Young in July 1970 after the end of their tour that year, which had strained relationships among the four members. It would take until 1974 before they would get back together again for a reunion tour.

Let’s take a look at some of the songs. Side one kicks off with the beautiful Out on the Weekend. Like all other tracks, the tune was written by Young.

A Man Needs a Maid is a song about Young’s girlfriend at the time, the actress Carrie Snodgress. According to Songfacts, initially, the tune was coupled with Heart of Gold and played on piano. “It was like a medley,” Young said in [the autobiography – CMM] Shakey, “the two went together.”

Speaking of Heart of Gold, a post celebrating the 50th anniversary of Harvest wouldn’t be complete without this song. One of Neil Young’s best-known tunes, it also appeared separately as the album’s lead single in January 1972 and became his biggest hit. James Taylor and Linda Ronstadt provided backing vocals. Taylor also played banjo.

On to Side two. Here’s Old Man, a tune Young wrote about the caretaker of the ranch he bought in 1970 as a 25-year-old. Like on Heart of Gold, backing vocals were provided by Taylor and Ronstadt, with Taylor also contributing banjo. Songfacts quotes Ronstadt from an interview with music magazine Mojo: “I can’t remember why Neil wanted me to sing with him – I guess he just figured I was there and could do it – but we went in there and they were doing ‘Heart of Gold’ and ‘Old Man’ and I thought they were such beautiful songs.” Old Man also became the album’s second single in April 1972.

Another great tune on Side two is Alabama. According to Songfacts, This song can be seen as a follow-up to Young’s 1970 song “Southern Man” from After The Gold Rush. Canadian-born Young abhorred the idea of racism and spoke out – loudly – about his feelings. This song went unnoticed by most, but combined with the previous effort, it caused Lynyrd Skynyrd to pen their Southern Rock classic “Sweet Home Alabama” in response to Young’s assertions...In his 2012 autobiography  Waging Heavy Peace, Neil Young said of this song, “I don’t like my words when I listen to it today. They are accusatory and condescending, not fully thought out, and too easy to misconstrue.” Stephen Stills and David Crosby provided backing vocals.

The last song I’d like to highlight is The Needle and the Damage Done, a tune about heroin use and what this drug sadly will do to many who get into it. Young wrote this song about ex-Crazy Horse guitarist Danny Whitten who struggled with heroin addiction. In fact, Young hired him in April 1972 to join rehearsals for his tour to support the Harvest album. But Whitten wasn’t up to the task and Young ended up firing him on November 18 that year, giving him $50 and a plane ticket to Los Angeles. Once Whitten got there, he overdosed on alcohol and Valium, which killed him – making Young feel guilty for many years.

Harvest topped the Billboard 200 for two weeks and became the best-selling album of 1972 in the U.S. While most music artists would have been pleased with such success, Neil Young felt alienated. He followed up Harvest with what became known as the “ditch trilogy”: the live album Time Fades Away (October 1973), as well as the studio records On the Beach (July 1974) and Tonight’s the Night (June 1975). While these three records didn’t match Harvest’s chart and sales performance, they became favorites of many Young fans.