What do you do when you’re in the mood for some great blues rock? You get some! And so I did with Street Corner Talking by Britain’s Savoy Brown released in September 1971. As it oftentimes goes with these types of posts, I got the idea to listen to their seventh studio album after my streaming music provider had served up Tell Mama, the record’s dynamite opener.

Savoy Brown – btw, what a cool name! – have been around for a bit. ‘How long’, you might wonder. How about more than 55 years! Not surprisingly, their line-up has changed many times over the decades, though the founder is still around and going strongly. Before getting to the album, a bit of history is in order. The following background is taken from the band’s bio on their website.

Savoy Brown was formed in 1965 by guitarist Kim Simmonds in London, England. Simmonds has been the group’s guiding hand from the first singles released in 1966 through the band’s newest effort, their forty-first album “Ain’t Done Yet” [released in August 2020. At the time, I featured one of the album’s tunes in a Best of What’s New installment]

…Energetic blues has been the calling card of the band from the beginning. Blues Rock became the catch-all phrase in the late 1960s to describe the band’s music along with that of contemporaries including Cream, Fleetwood Mac, and Jimi Hendrix…

...Through the 1960s, 1970s and 1980’s songs such as “I’m Tired”, “Train to Nowhere”, “Tell Mama” and “Lay Back In The Arms Of Someone” became Hot 100 entries. Two of the band’s albums in the 1970s, “Looking In” and “Hellbound Train”, appeared on the Billboard Top Forty charts…Along the way, Savoy Brown has toured continuously, making it one of the longest running blues rock bands in existence. Through the years, the band has headlined concerts at many prestigious venues including Carnegie Hall, the Fillmore East, the Fillmore West, and London’s prestigious Royal Albert Hall...

…Former [Savoy Brown] members, having cut their teeth under Simmonds’ leadership, have gone on to complete their careers with other bands. Among others, these include singer Dave Walker with Fleetwood Mac and Black Sabbath, Bill Bruford with King Crimson, Andy Pyle with the Kinks and Paul Raymond with UFO… Three other band alumni – Lonesome Dave Peverett, Roger Earl, and Tony Stevens, went on to become the founding members of the multi-platinum act Foghat. Sounds a bit like John Mayall to me!

Kim Simmonds (guitar, vocals), who has lived in the U.S. since 1980, remains the only original member of Savoy Brown’s current line-up. The other core members include Pat DeSalvo (bass, backing vocals) and Garnet Grimm (drums). Both have been with the band since 2009. With that, let’s get to some music!

I’d like to kick it off with the song that inspired the post. Tell Mama, the first track on the album, was co-written by Simmonds and Paul Raymond, the band’s keyboarder at the time. Just a great catchy rocker with some cool slide guitar action.

Taking on The Temptations perhaps is a near-impossible task, but I have to say I really dig where Savoy Brown took I Can’t Get Next to You. Co-written by Motown songwriters Norman Whitfield and Barrett Strong, this psychedelic soul gem was first released by The Temptations as a single in July 1969. It also appeared on their 11th studio album Puzzle People that came out in September of the same year. Check out how nicely Savoy Brown’s version of the tune is shuffling along. I also dig the keyboard work.

Time Does Tell is another great track. It was written by Simmonds. Andy Sylvester’s bass work gives this tune a great groove. I also like Simmonds’ guitar solo that starts at about 2:42 minutes. Damn, this is really cool – don’t take it from me, give it a listen!

Here’s the title track, another song Simmonds wrote. I can hear some Cream in that guitar riff. And that’s never a bad thing!

I’d like to wrap things up with another nice cover: Willie Dixon’s Wang Dang Doodle. Dixon wrote that tune in 1960, and it was first released by Howlin’ Wolf in 1961. Haven’t we all felt like hanging out with automatic slim, razor totin’ jim, butcher knife totin’ annie and fast talkin’ fanny to pitch a wang dang doodle all night long? 🙂

This is the first album by Savoy Brown I’ve explored in greater depth, and I really dig it – can you tell? 🙂 This certainly wants me to listen to more from this band. Any tips are welcome! 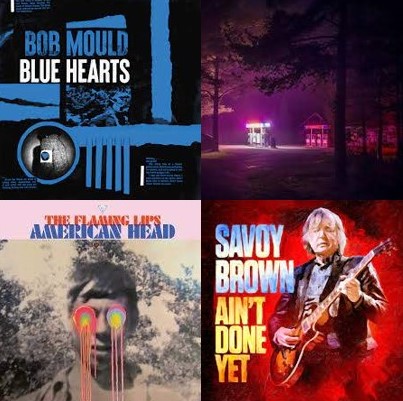 The weeks seem to be flying by these days. After having spent so much time at home since March due to the seemingly never-ending COVID-19 pandemic, I frequently find myself forgetting what day of the week it is. Anyhow, my calendar tells me today is Saturday, which means it’s time to take another look at newly released music. Without any further delay, let’s get to some great stuff I found!

American guitarist and songwriter Bob Mould, who has been active since 1979, is primarily known for his work with punk and alternative rock bands Hüsker Dü in the late ’70s and ’80s, and Sugar in the ’90s. He also has released 13 solo albums to date. Siberian Butterfly is a catchy grungy pop rocker that reminds me a bit of Green Day. The tune came out on September 9 ahead of Mould’s 14th studio album Blue Hearts, which is scheduled for September 25. I’ve said it before and I’ll say it again: Old guys rock! 🙂

Doves are an English alternative rock band from Manchester, England. There were formed in 1998. After going on hiatus in 2010, they regrouped in December 2018. The band includes twin brothers Jez Williams (guitar, vocals) and Andy Williams (drums, vocals), along with Jimi Goodwin (bass, vocals, guitar). Martin Rebelski (keyboards) is part of Doves’ touring line-up and has also been involved in their recording sessions. Co-written by the Williams brothers and Goodwin, Broken Eyes is a tune from the band’s fifth and latest studio album The Universal Want that appeared on September 11. Check out the track’s great sound, which drew me in right away.

The Flaming Lips/Mother Don’t Be Sad

The Flaming Lips are an American band with an eclectic style, which were formed in Oklahoma City in 1983. They include founding members Wayne Coyne (vocals, guitar, keyboards) and Michael Irvins (bass), as well as Steven Drozd (guitar, keyboards), Derek Brown (guitar, keyboards), Jake Ingall (keyboards, guitar), Matt Duckworth Kirksey (drums) and Nick Ley (percussion). The current line-up has existed since 2014. According to Wikipedia, the band’s music has varied over time and included alternative, psychedelic and experimental rock and noise pop, among others. Their mainstream breakthrough came with their ninth studio album The Soft Bulletin in 1999. The band also won three Grammy awards, including Best Surround Sound Album for their 2006 studio release At War With the Mystics. Mother Don’t Be Sad is a track from their new album American Head released on September 11. Credited to the entire band, the tune also appeared separately on August 28 as the album’s sixth upfront single. This intriguing power ballad is beautiful and haunting at the same time.

Okay, we’ve come to the final tune of this Best of What’s New installment, and there hasn’t been any blues rock. Of course, I can’t let this happen! Rocking in Louisiana is a terrific tune by longtime British blues rockers Savoy Brown from their new album appropriately titled Ain’t Done Yet, which came out on August 28. This band has been around since 1965, when it was founded by guitarist Kim Simmonds and harmonica player John O’Leary. The original line-up also included Brice Portius (vocals), Trevor Jeavons (keyboards), Ray Chappell (bass) and Leo Manning (drums). Since their debut album Shake Down from September 1967, Savoy Brown have released some 40 additional studio, live and compilation records. Simmonds remains as the only original member in the band’s current version that since 2009 has also featured Pat DeSalvo (bass) and Garnet Grimm (drums). These guys are nicely rockin’, with Simmonds throwing in some sweet slide guitar work. My kind of music!