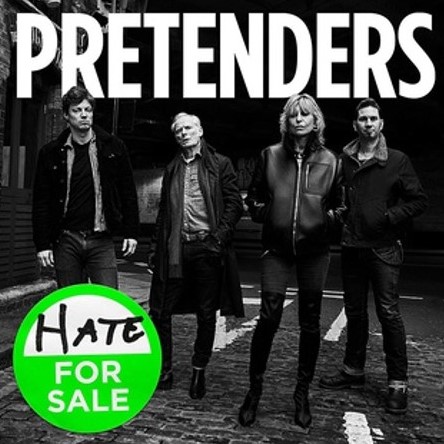 Back in May, I included The Pretenders in a Best of What’s New installment with You Can’t Hurt a Fool, a great tune and the third single from their then-upcoming new album Hate for Sale. Yesterday, I randomly remembered that post and it occurred to me I had forgotten about the album that came out two weeks ago on July 17. I’m not going to pretend (no pun intended here) I know each and every record of the band in and out, but based on what I’ve heard, Hate for Sale must be one of the best albums they’ve ever released.

Not counting Alone from October 2016, a Chrissie Hynde solo album she recorded with a different backing band and released under the Pretenders name, Hate for Sale is the band’s first new album in nearly 12 years since Break Up the Concrete from October 2008. When I say the band, I’m referring to Hynde, James Walbourne (guitar, backing vocals) and Nick Wilkinson (bass). Drummer and original co-founder Martin Chambers, who is back in the fold, had not been on a Pretenders record since Loose Screw released in November 2002.

Welsh singer-songwriter and multi-instrumentalist Carwyn Ellis is also listed as a member on the band’s website but neither is on the album cover nor seems to appear in official press photos. Perhaps that’s because Ellis is also the founder and front man of British alternative band Colorama.

All songs on Hate for Sale were co-written by Hynde and Walbourne. Not only is that different from Break Up the Concrete, which saw Hynde as the sole writer, but I think it also benefits the album. In addition to strong tunes, what stands out to me on Hate for Sale are a great, oftentimes raw rock sound and Hynde’s singing, which sounds as great as ever. But don’t take it from me. Let’s get to some music!

Here’s the official video of the title track. I like the false start. It’s also really a kickass tune!

One of Hate of Sale’s highlights is The Buzz. That track was also one of the three singles that came out leading up to the album’s release. Quite a catchy tune!

Lightning Man has a cool ska-ish groove, providing a nice contrast to the other tunes.

Next up: Turf Accountant Daddy, another great tune.

The songs I’ve highlighted thus far are the album’s first four tracks. I’m only skipping the fifth song You Can’t Hurt a Fool, since I previously wrote about it. I think this goes to show what a compelling album Love for Sale is! Let’s do one more: Maybe Love Is in NYC.

Hate for Sale is the 11th studio album by The Pretenders. It was produced by Stephen Street, who had worked with the band on ¡Viva El Amor!, their seventh studio album from May 1999, which he co-produced with Stephen Hague. Street is also known for his work with The Smiths, The Cranberries and English alternative rock band Blur. According to Wikipedia, Hate for Sale has been well received. Frankly, if you like the early music by The Pretenders, it’s hard for me to see how you couldn’t dig Love for Sale. My only regret is that with 30 minutes, the album definitely is on the short side!