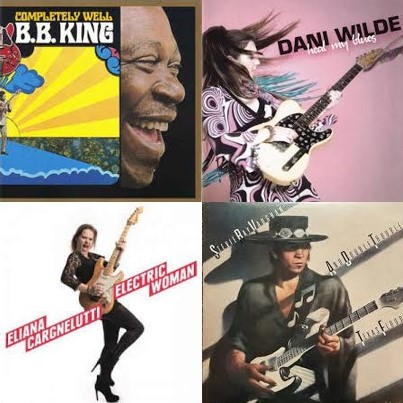 Woke up this morning, with the blues in my head…

I don’t even want to pretend I know how to write lyrics, so let’s better stop it right here. But the content of these words largely reflects the truth, if you allow that “the blues in my head” actually was a set of headphones and that I was listening to a Buddy Guy tune, followed by a Walter Trout song this morning.

While I never need an excuse to blog about music I dig, the aforementioned little episode gave me the idea to put together a post about blues and blues rock tunes, so I wanted to acknowledge it. In fact, I would say the majority of my blogging is triggered by spontaneous music encounters. With that explanation out of the way, let’s get to some music!

Buddy Guy/I Suffer With the Blues

Given the intro, it makes sense to kick things off with Buddy Guy. This is a tune from his 1967 debut album Left My Blues in San Francisco. I Suffer With the Blues was written by Guy who today, more than 50 years years later at age 84, still plays his energetic brand of electric guitar blues. I guess he wasn’t kidding when he titled his 17th studio album from July 2015 Born to Play Guitar, an amazing album, btw.

Boy, would I have loved to see Janis Joplin in concert! Her incredibly powerful voice and her energy were just off the charts. Try (Just a Little Bit Harder) is the incredible opener of what sadly was Joplin’s only solo album that appeared during her short lifetime, I Got Dem Ol’ Kozmic Blues Again Mama!, released in September 1969. The tune was co-written by Jerry Ragovoy and Chip Taylor.

Walter Trout/All Out Of Tears

Since I listened to Survivor Blues, Walter Trout’s aptly titled studio album from Jan 2019, I’ve really come to dig this bluesman who originally is from New Jersey. After overcoming alcohol and drug addiction in the ’80s and making it through a liver transplant necessitated by liver failure, Trout perhaps is the ultimate blues rock survivor. All Out Of Tears is a tune from is most recent album Ordinary Madness that came out in August 2020. The great slow blues, which has a bit of a Gary Moore vibe, was co-written by him, his wife and manager Marie Trout and blues fellow artist Teeny Tucker.

While Bonnie Raitt crosses genres, I simply couldn’t do this post without including her. She’s one of my all-time favorite artists, not only because of her extraordinary slide guitar playing, but also because of her sincerity. Raitt covered Mighty Tight Woman, a Sippie Wallace tune, on her eponymous debut album from November 1971.

B.B. King needs no further introduction. I pretty much could have picked any tune. What Happened is from Completely Well, King’s 17th studio album released in December 1969, which is best known for his cover of The Thrill Is Gone. What Happened holds the distinction of being the only tune on the album, which was written by King.

The blues is a genre that has a number of great young female guitarists. One is 35-year-old Dani Wilde from South West England. At age 22, she was signed to Ruf Records, an independent German blues label, a force in blues with an impressive roster of artists. A significant portion of them are women. Bring Your Loving Home, written by Wilde, is the opener of her debut album Heal My Blues from 2008.

A post about blues tunes really would be incomplete without Stevie Ray Vaughan. Sadly, this amazing guitarist from Texas lost his life already at age 35 in a helicopter crash, one of so many talented musicians who died in air travel accidents. Pride and Joy, written by Vaughan, appeared on his debut album Texas Floods released in June 1983. He’s also an artist I would have loved to see live.

Serbian blues singer and guitarist Ana Popović, who currently resides in Los Angeles, is another talented female artist who started her solo career at Ruf Records with the album Hush! from January 2001. Written by Popović, Fearless is the opener of her fifth studio album Unconditional that came out in August 2011.

One of the coolest collaboration albums I know is TajMo from May 2017, which brought together two blues greats from different generations: Taj Mahal and Keb’ Mo’. I was fortunate to catch them during a tour they did that year to support the album – one of the best shows I’ve seen. Here’s the fantastic opener Don’t Leave Me Here cowritten by Gary Nicholson, Mo’ and Mahal.

Time to wrap up this post. How many female blues guitarists from Italy do you know? Had you asked me that question a few years ago, I would have come up completely empty. I “discovered” Eliana Cargnelutti in January 2019, when I did a feature on female blues artists. The 31-year-old from Udine, Italy, who is yet another artist on Ruf Records’ roster, has released two albums to date. Here is Just For Me, a track from Cargnelutti’s sophomore album Electric Woman  released in January 2015.