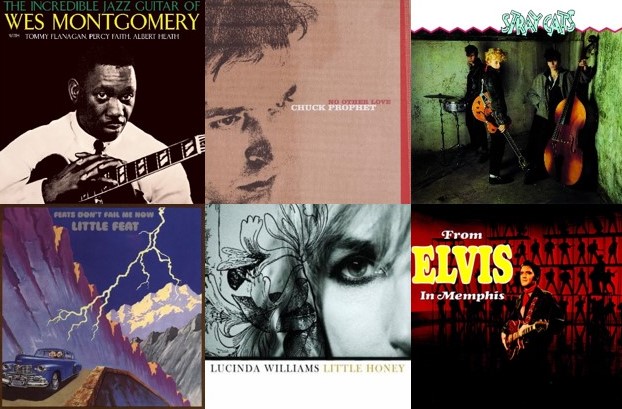 Another Sunday calls for another expedition into the great world of music and all its different beautiful flavors. In case you’re new to this weekly recurring feature, you may ask yourself why throw all kinds of tracks from different eras into a post in a seemingly arbitrary fashion. Well, I have a fairly eclectic taste and find it liberating not to limit myself to a specific theme like I typically do in my other posts. Hope you’ll join me!

Wes Montgomery/In Your Own Sweet Way

The first stop on today’s journey is April 1960, which saw the release of a studio album by Wes Montgomery. Even if you’re not a jazz aficionado, chances are you’ve heard of this amazing American jazz guitarist. His unusual technique to play the guitar, including plucking the strings with the side of his thumb and his frequent use of octaves, created a distinct and beautiful sound. During his active career spanning the years 1947-1968, Montgomery regularly worked with his brothers Buddy Montgomery (vibraphone, piano) and Monk Montgomery (bass), as well as Melvin Rhyne (organ). Sadly, Wes Montgomery’s life was cut short at age 45 when he suffered a heart attack in June 1968. In Your Own Sweet Way, composed by Dave Brubeck in 1952, is a track off an album aptly titled The Incredible Jazz Guitar of Wes Montgomery.

Obviously, here in America, we’re into the summer season, so picking a tune titled Summertime Thing didn’t look far-fetched. The artist is Chuck Prophet, who only entered my radar screen earlier this year, and we now find ourselves in June 2002. From his AllMusic bio: Chuck Prophet is a singer, songwriter, and multi-instrumentalist who has created a handful of impressive solo albums when he isn’t busy collaborating with some of the most respected figures in roots rock. A songwriter with a naturalistic sense of storytelling and drawing characters, and a melodic sense that brings together the impact of rock with the nuance of country, blues, and folk, Prophet has been releasing worthwhile solo albums since 1990, when he brought out his first solo LP, Brother Aldo. Prior to that, he was a key member of the rough-edged Paisley Underground band Green on Red, who had a small cult following in the United States and a significantly larger one overseas, and in between solo efforts, he worked as a sideman, collaborator, or producer for Alejandro Escovedo, Kelly Willis, Warren Zevon, Cake, Kim Richey, and many more. Summertime Thing, written by Prophet, is from his 2002 solo album No Other Love. I really dig what I’ve heard from him thus far – good reminder to keep exploring!

Let’s pick up the speed with some fun ’50s rockabilly brought to us by Stray Cats. Formed in the U.S. in 1979 by guitar virtuoso Brian Setzer, double bassist Lee Rocker and drummer Slim Jim Phantom (gotta love that stage name!), the trio initially established a following in the New York music scene. After a gig in London, they met Welsh singer-songwriter, guitarist and record producer Dave Edmunds who co-produced their eponymous debut album. First released in the UK in February 1981, the record generated an impressive three top 40 hits on the Official Singles Chart: Runaway Boys (no. 9), Stray Cat Strut (no. 11) and the tune I decided to pick, Rock This Town (no. 9), which was penned by Setzer. The Cats are still roaming the streets, though they’ve had a few breaks along the way. Remarkably, their current line-up is the original formation. Coinciding with their 40th anniversary, they put 40 in May 2019, their 10th and first new studio album in 26 years. Let’s shake it, baby – meow!

Time to see a doctor. ‘What kinda doctor?’ you may wonder. Well, obviously not any doctor. What we need is a Rock and Roll Doctor. And this brings us to Little Feat and August 1974. I had this tune earmarked for Sunday Six use a while ago. The group was formed in 1969 in Los Angeles by singer-songwriter, lead vocalist and guitarist Lowell George and pianist Bill Payne, together with Roy Estrada (bass) and Richie Hayward (drums). George and Estrada had played together in The Mothers of Invention. Notably, Frank Zappa was instrumental in the formation of Little Feat and getting them a recording contract. After George’s death in 1979, the group finished one more album, Down On the Farm, before disbanding. They reunited in 1987 and have had a history since then that is too long to recap here. Rock and Roll Doctor, co-written by George and Martin Kibbee, appeared on the band’s fourth studio release Feats Don’t Fail Me Now, their first charting album, reaching no. 36, no. 40 and no. 73 in the U.S., Canada and Australia, respectively.

Let’s pay the current century another visit with this gem by Lucinda Williams: Knowing, off her ninth studio album Little Honey, released in October 2008. While I had been aware of her name for many years, it wasn’t until June of this year that I started paying attention to her when she opened for Bonnie Raitt in Philly. The American singer-songwriter who has been active since 1978 blends Americana, folk, country and heartland rock. Her fifth studio album Car Wheels on a Gravel Road brought her commercial breakthrough. Nine additional albums have since come out. In November 2020, Williams suffered a debilitating stroke. While she has managed to largely recover and resume performing, some signs are still visible. Like most tunes on Little Honey, Knowing was solely written by Williams – great lady!

And once again, we’re reaching the final stop of our music journey. I’d like to go back to 1969 and one of my all-time favorite Elvis Presley renditions: Suspicious Minds. The tune was written by American songwriter Mark James in 1968, who also first recorded it that year. Not sure what kind of impact the original single had but I know this: Presley’s version, which was released in August 1969, was a huge success, becoming his 18th and final no. 1 single in the U.S. Notably, as Wikipedia points out, session guitarist Reggie Young played on both the James and Presley versions. A leading session musician, Young also worked with the likes of Joe Cocker, John Prine, J.J. Cale, Johnny Cash and Merle Haggard. Man, I love that song!

Thanks for accompanying me on another zig-zag music excursion. Of course, this post wouldn’t be complete without a Spotify playlist of all featured tunes. Here you go – hope there’s some stuff you like! 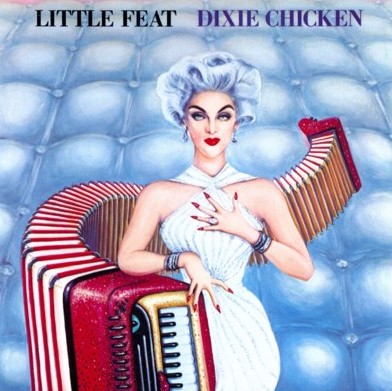 In March 2018, I listened to Waiting For Columbus by Little Feat after a dear longtime friend from Germany had highly recommended this great live album from 1978. I also wrote about it at the time. Then, as oftentimes happens, before I knew it, I was on to other music avenues, and the band fell off my radar screen again. Luckily, my streaming music provider served up the song Dixie Chicken as part of a playlist the other day. The title track of Little Feat’s third studio album from January 1973 prompted me to take a closer look at the record. It didn’t take long to realize that Dixie Chicken is a true gem.

Before I get to some music, I like to provide a bit of background on the group. Little Feat were formed in 1969 in Los Angeles by singer-songwriter, lead vocalist and guitarist Lowell George and pianist Bill Payne, together with Roy Estrada (bass) and Richie Hayward (drums). George and Estrada had played together in The Mothers of Invention.

While Frank Zappa was instrumental in the formation of Little Feat and getting them a recording contract, the details are disputed. One version is that Zappa encouraged George to form his own group after he had listened to George’s song Willin’. A second version is that Zappa who was strongly opposed to drugs fired George from the Mothers after he noticed some references to drugs in the lyrics of Willin’. The third version is the weirdest: Zappa kicked out George after George had played a 15-minute guitar solo with his amplifier off!

Whatever the true circumstances were, Little Feat signed a deal with Warner Bros. Records and soon thereafter started recording their eponymous debut album, which appeared in January 1971. By the time Little Feat went into the studio to make Dixie Chicken, the group had become a six-piece. Estrada had been replaced by Kenney Gradney on bass, and the band had added Paul Barrere (guitar, vocals) and Sam Clayton (congas). Among additional guest musicians were Bonnie Bramlett, of Delaney & Bonnie fame; Danny Hutton, vocalist in Three Dog Night; and Bonnie Raitt, who each provided backing vocals.

On to some music. Here’s the album’s opener and title track, which is widely viewed as the band’s signature song. Dixie Chicken was co-written by George, who had established himself as Little Feat’s frontman, producer and main songwriter, and Martin Kibbee, who according to Songfacts was credited as Fred Martin. Bramlett supported Lowell on lead vocals. Love the New Orleans vibe this tune has!

Another tune on side one (in vinyl speak) is a great cover of On Your Way Down, a song by influential R&B New Orleans artist Allen Toussaint. It first appeared on his 1972 studio album Life, Love and Faith.

On to side two and Walkin’ All Night. Co-written by Barrere and Payne, it’s one of only three tracks on the album that were not penned by George. It’s got a bit of a Stones vibe. Of course, that’s also true for many of the other tunes on the record.

Fat Man in the Bathtub (gotta love that title!) was also written by George. Not much more that I can say here other than it’s yet another gem on an album that’s packed with great music.

Let’s do one more. Here’s Juliette, yet another song written by George.

Following George’s death in late June 1979 from a cocaine overdose-induced heart attack at the age of 34 and the release of Little Feat’s seventh studio album Down On The Farm in November that year, the band called it quits. In 1987, surviving members Barrere, Clayton, Gradney, Hayward and Payne revived Little Feat, and added songwriter, vocalist and guitarist Craig Fuller and Fred Tackett (guitar, mandolin, trumpet) to the line-up.

Between 1988 and 2012, Little Feat released nine additional albums. Barrere passed away from cancer in October 2019. He was 71. The group remains active to this day, with Clayton, Gradney, Tackett and founding member Payne being part of the current line-up. According to Little Feat’s official website, they have scheduled a series of U.S. dates starting November 11 in Port Chester, N.Y. Also, if you feel like catching them in Jamaica, together with Nitty Gritty Dirt Band, Larry Campbell and Teresa Williams and Band, Tommy Emmanuel and Jack Broadbent, and have the time, not to mention the necessary dollars to go on a music adventure, you can do so from January 30 – February 5, 2022 at Featcamp.