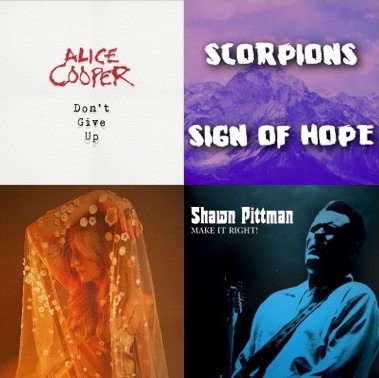 There’s a good deal of recently released new music I came across today for this 10th and latest installment of the recurring feature. Two longtime acts, Alice Cooper and Scorpions, join four artists who are entirely new to me. From shock rock to bluegrass to blues rock, it’s all here. That kind of variety is exactly how I envisaged these posts to be when I started the series. Let’s get to it!

While I don’t listen frequently to Mr. Shock Rock, I dig classics like School’s Out and No More Mr. Nice Guy. Alice Cooper’s latest single Don’t Give Up, which was released on May 15, certainly isn’t comparable to these aforementioned tunes, but I still find it sufficiently enjoyable. “”Don’t Give Up” is a song about what we’ve all been going through right now and about keeping our heads up and fighting back together,” Cooper stated on his website. This video wouldn’t have been possible without you – and who knows, you might be in it!And whatever you do – “Don’t Give Up”” – okey dokey!

I’ve been meaning to write again about the German rock/pop metal band and guess I was looking for an occasion. Now I got one: Don’t Give Up, a new single that came out on May 14. Scorpions first entered my radar screen in 1984 with their ninth studio album Love at First Sting. Various songs from that record received heavy radio play in Germany, especially Rock You Like a Hurricane, Big City Nights and Still Loving You. While I don’t listen much to metal, what I always liked about Scorpions is how they blended heavy guitar rock with pop and catchy melodies. “We are working on lot’s of Hard‘n Heavy Rockers for our new album these days,” reads a short statement from the band on their website. “…but because of the dramatic Covid-19 pandemic, we want to give you a little Sign of Hope that came straight from the heart in troubled times … stay healthy and safe … we love you … Scorpions.”

This 37-year-old country singer-songwriter from Nashville is new to me. Based on Wikipedia, Margo Price grew up in Aledo, Ill. and moved to Nashville at age 20 in 2003 after dropping out of school. Her debut studio album Midwest Farmer’s Daughter appeared in March 2016. Twinkle Twinkle, a nice scorching rocker, is the second single from Price’s upcoming third album That’s How Rumors Get Started, produced by Sturgill Simpson. The song appeared on March 11. The release of the new album has been pushed back to July 10 due to COVID-19.

Brian Fallon is a 40-year-old singer-songwriter from Red Bank, N.J. While that’s only 30 miles from my house, I had never heard of this artist before either. It looks like he has been active since 1997 and released three studio albums and one EP to date. When You’re Ready is a pretty, soothing tune from his most recent album Local Honey released on March 27. Are you ready? 🙂

According to Wikipedia, Watkins Family Hour is a bluegrass musical collaborative led by Sara and Sean Watkins. The group began in 2002 as a monthly, informal musical  variety show with the Watkins siblings and their friends in the Los Angeles nightclub Largo. Their eponymous debut album, which consists entirely of covers, was released on July 24, 2015…and was produced by Sheldon Gomberg. Among others, Gomberg has worked with Charlie Musselwhite, Rickie Lee Jones, Kenny Wayne Shepherd, Jackson Browne and Steve Forbert– quite impressive credentials! Miles of Desert Sand is from their most recent album Brother Sister from April 10, which based on Discogs appears to be their sophomore album. I really dig the warm sound of the fiddle and the harmony singing. Check it out!

Shawn Pittman/There Will Be a Day

Let’s end this post with some funky blues. There Will Be a Day is a hot groovy tune from Make It Right!, which according to Wikipedia is the 13th album by blues rock singer-songwriter Shawn Pittman, another artist I don’t believe I had heard of before. But I can tell you one thing: Based on the few songs I’ve sampled from that album, I’m ready for more! Pittman who was born and grew up in Oklahoma moved to Dallas at age 17. He had picked up the guitar in his early teens and got involved in the music scene at Schooners, a Dallas local club. In 1996 as a 22-year-old, Pittman self-recorded his debut album Blues From Texas, which was retitled Burnin’ Up for his national debut in 1997. Pittman has worked with musicians from Double Trouble, the former backing band of Stevie Ray Vaughan, as well as Kim Wilson, Gary Clark Jr. and Susan Tedeschi, to name a few others. Make It Right! was released on April 10. Pittman certainly embraced the title!