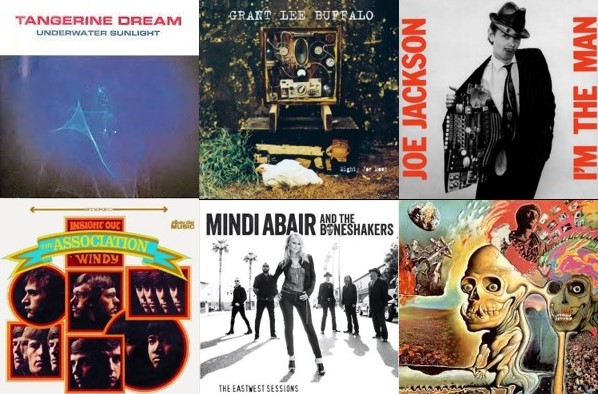 Little darling, it’s been a long, cold lonely winter – well, it actually wasn’t that bad, at least here in lovely Central New Jersey, but the line from George Harrison’s Here Comes the Sun was the first thing that came to mind in connection with spring, which officially started today! With that being said, let’s get to the first spring edition of The Sunday Six.

Today’s trip starts with a soothing instrumental by German electronic music stalwarts Tangerine Dream. This track was part of a “chill mix” playlist my streaming music provider served up the other day. Founded as a five-piece in 1967 by Edgar Froese, the group has seen numerous line-up changes over its long and still ongoing history. Wikipedia notes their best-known line-up was a trio, which in addition to Froese (keyboards, guitars) included Christopher Franke (keyboards, drums) and Peter Baumann (keyboards). Spanning the years 1971-1975, that line-up’s albums included Alpha Centauri (March 1971), Zeit (August 1972), Atem (March 1973), Phaedra (November 1973) and Rubycon (March 1975). To get to Underwater Twilight, a track from Tangerine Dream’s 16th studio album Underwater Sunlight, we need to jump forward 11 years to August 1986. By that time, Froese and Franke were joined by Paul Haslinger (synthesizer, grand piano, guitar). Froese remained with Tangerine Dream until his death in January 2015. The group’s current line-up has no original members. The only connection to the past remains Froese’s widow Bianca Froese-Acquaye who acts as the group’s manager.

Our next stop takes us to the ’90s and Grant Lee Buffalo, a rock band from Los Angeles, who initially were active between 1991 and 1999. Their members included Grant-Lee Phillips (vocals, guitar), Paul Kimble (bass) and Joey Peters (drums). All of the group’s four studio albums came out during that period. After they disbanded in early 1999, Phillips launched a solo career. In late 2010 and early 2011, Grant Lee Buffalo briefly came back together for a reunion tour. Rock of Ages, penned by Phillips, is a great track from the group’s sophomore album Mighty Joe Moon, released in September 1994. Its vibe reminds me a bit of Knockin’ On Heaven’s Door. I’m completely new to this group and dig what I’ve heard so far. I’d welcome listening tips any of you may have.

For this tune, we’re gonna step on the gas and go back to October 1979 and the sophomore album by Joe Jackson, aptly titled I’m the Man. The record, which I received as a present for my 14th birthday in 1980, was my introduction to the British artist. Initially, he gained popularity with post-punk and new wave before embracing a jazz-oriented pop sound. With Joe Jackson’s Jumpin’ Jive from June 1981, he also did an all-out jump blues and swing record. His most recent album Fool, which I reviewed here, appeared in January 2019. It’s quite compelling! Back to I’m the Man and Friday, which was penned by Jackson. One of his ingredients is excellent bassist Graham Maby, who continues to play with Jackson to this day. Check out Maby’s pulsating bassline – so good! I should also acknowledge Gary Sanford (guitar) and David Houghton (drums, vocals), which rounded out Jackson’s band at the time – the best backing group he has had, in my view.

After three tunes into our journey, it’s high time to visit my favorite decade the ’60s. And, boy, do I have a sunshine pop goodie that has California written all over it. The Association have been active since 1965, except for a short one-year break-up from 1978 to 1979. Their heyday was in the ’60s where they had a series of top 10 hits. The group also opened the Monterey International Pop Festival that took place June 16-18, 1967. Never My Love, co-written by American siblings Don Addrisi and Dick Addrisi, is among The Association’s biggest hits, climbing to no. 2 in the U.S. on the Billboard Hot 100 and topping the Canadian charts. The tune first appeared on the band’s third album Insight Out from June 1967, before being released as a single in August that year. The Association are still around. As one can imagine, they have had numerous line-up changes, and if I see this correctly, only guitarist and vocalist Jules Alexander remains as an original member. Check out that beautiful harmony singing – gives me goosebumps!

Mindi Abair and The Boneshakers/Vinyl

A few days ago, I featured The Boneshakers in a post dedicated to blues and blues rock. This cool group was formed in the early 1990s by Was (Not Was) guitarist Randy Jacobs and Hillard “Sweet Pea” Atkinson, one of the group’s vocalists, after Was (Not Was) had gone on hiatus. Since 2015, The Boneshakers have repeatedly worked with American saxophonist and vocalist Mindi Abair. This lady is one firecracker. Check out Vinyl, the opener of an album titled The EastWest Sessions that came out in September 2017. Love the funky groove and the soulfulness of this tune!

The Flaming Lips/Can’t Stop the Spring

As we’re once again reaching the final destination of our six-tune music time travel, I thought it would make sense to end this post where it started – spring! I give you Can’t Stop the Spring by psychedelic rock band The Flaming Lips, which I found through a search of my streaming provider’s music library. Somehow that title sounded familiar, so I searched my own blog, which sadly I’ve done more than once to see whether I already covered an artist or song. And, full disclosure, I previously included the tune in a post from March 2021 titled Here Comes the Spring. There’s nothing wrong to repeat a song, even if it’s what I like to call weirdly catchy. As I noted at the time, Can’t Stop the Spring, credited to the entire band, is from their sophomore album Oh My Gawd!!!…, released in January 1987. Formed in Oklahoma City in 1983, The Flaming Lips are still around.

While mornings in Central New Jersey are still on the chilly side, it’s slowly starting to feel like spring. Recently, when I stepped out for a morning walk prior to starting home office, I could hear birds singing. And just yesterday, I had the same experience again, so chances are the birds are real and not just in my head! Hoping this won’t jinx the start of the milder season, I’ve decided to put together this little playlist featuring songs that are about spring, at least in a broader sense.

The Beatles/Here Comes the Sun

I can hardly think of a more perfect tune to mark the upcoming season than Here Comes the Sun. The song, which appeared on The Beatles’ real final album Abbey Road from September 1969, remains one of my favorite George Harrison tunes.

Admittedly, this song doesn’t mention spring anywhere (neither does Here Comes the Sun), but I feel the lines Mr. Blue Sky/Please tell us why/You had to hide away for so long? can be interpreted as a reference to winter having passed. Written by Jeff Lynne, the tune is included on Electric Light Orchestra’s seventh studio album Out of the Blue released in October 1977. It also became one of the record’s five singles and was one of ELO’s higher charting songs in the UK, climbing to no. 6 on the Official Singles Chart.

This is one of the best picker-uppers I know. Again, the tune could be about sunshine following the rain in pretty much any season. But heck, let’s not over-complicate things here! I Can See Clearly Now was written by Johnny Nash as the title track of his 1972 studio album. The tune was also released as a single and became Nash’s biggest hit topping the Billboard Hot 100 in the U.S., as well as the charts in Canada and South Africa. It’s been covered by Jamaican reggae singer Jimmy Cliff and many other artists. There’s just something about Nash’s soft vocals in that tune that always puts me at ease.

While I just cleverly noted there’s no reason to overthink things, you still may find it a bit peculiar that up this point none of the featured songs in this post have the word “spring” in the title or the lyrics. Okay, I shall relent and offer you So Early, Early in the Spring by Judy Collins, a pretty tune with a nice Joni Mitchell vibe. Collins included this traditional on her 1977 compilation So Early in the Spring… The First 15 Years. BTW, now 81 years old, the American folk singer is still active, some 62 years into her career. According to her website, Collins performed two online concerts in New York two weeks ago – incredible!

Indigo Girls/Southland in the Springtime

Without striving to be a spring song over-achiever, here’s another lovely tune that clearly names the season: Southland in the Springtime written by Emily Saliers, who together with Amy Ray makes up American folk rock duo Indigo Girls. This is a track from their third studio album Nomads Indians Saints that came out in September 1990. Really like this!

The Flaming Lips/Can’t Stop the Spring

Let’s wrap up this set of spring tunes with a rocker. And, yes, it’s yet another track that has “spring” in the title: Can’t Stop the Spring by The Flaming Lips. While I would put this tune in the weirdly catchy department, it’s got a good motto to me. Can’t Stop the Spring, credited to the entire band, is from their sophomore album Oh My Gawd!!! released in January 1987. Formed in Oklahoma City in 1983, The Flaming Lips are still around. Last September, I featured a tune from their most recent album American Head in a Best of What’s New installment.