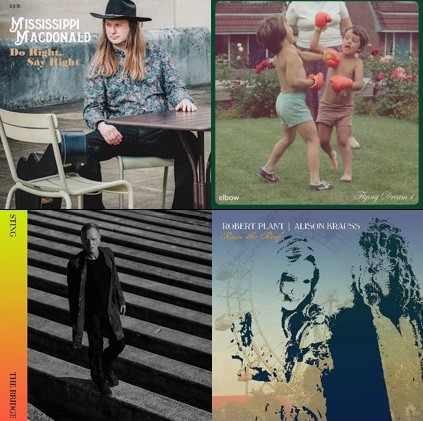 Welcome to my latest weekly foray into newly released music. This time, my picks include two artists I’ve listened to for more than 40 years and two who are completely new to me, though both are well established. There’s some blues, alternative rock, pop and soul, making for a good mix. All tracks are on albums that came out yesterday (November 19). Let’s get to it!

When I spotted this review on Rock & Blues Muse earlier this week, I immediately had a feeling I would dig this contemporary British blues guitarist. From his website: Mississippi MacDonald is a 3 times British Blues Awards nominee, from London, England. He has been playing since he was 11 years old and has travelled extensively on the US blues trail, meeting, amongst others, Pinetop Perkins, Willie Big Eyes Smith, Otis Clay and BB King…Mississippi’s albums, “Dress For The Money” [third studio album from 2016 – CMM] and “American Accent” [2015 sophomore album – CMM] reached number 1 and 3 respectively in the UK IBBA Blues Charts. American Accent was one of the top 10 IBBA albums of 2016, and was the “Blues Is Back” Album of the Year, 2017. This brings me to MacDonald’s seventh and new album Do Right, Say Right. Here’s the official video for lead single It Can’t Hurt Me, which was first released on October 15 – man, this sounds mighty sweet!

Elbow are a British alternative rock band formed in the Manchester area in 1997. According to their Apple Music profile, they began as a Sly Stone-influenced funk act called Soft, before deciding to change their name and take musical cues from The Velvet Underground, Radiohead, and U2. David Bowie’s Hunky Dory and Joni Mitchell’s For the Roses are two of Elbow frontman Guy Garvey’s favorite albums from childhood. Elbow has had three consecutive No. 1 UK albums: 2014’s The Take Off and Landing of Everything, 2017’s Little Fictions, and 2019’s Giants of All Sizes. The band won Britain’s Mercury Prize for 2008’s The Seldom Seen Kid, which has sold more than 1 million copies. Looks like Elbow have had significant success in the UK. Remarkably, they still have their original line-up: Guy Garvey (lead vocals, guitar), Craig Potter (keyboard, piano, backing vocals), Mark Potter (guitar, backing vocals) and Pete Turner (bass, backing vocals). Here’s After the Eclipse, a track from their just-released ninth studio album Flying Dream 1, credited to all four members. I find this very soothing.

On September 1, ex-Police frontman Sting announced his new studio album The Bridge, which is now out: The Bridge was written in a year of global pandemic and finds Sting ruminating on personal loss, separation, disruption, lockdown, and extraordinary social and political turmoil…Representing various stages and styles from throughout his career and drawing inspiration from genres including rock n’ roll, jazz, classical music and folk, the eclectic album features Sting’s quintessential sound on pop-rock tracks such as the album’s opening rock salvo “Rushing Water” and new indie-pop sounding “If It’s Love,” to the smoldering electronic ballad “Loving You” and the romantic “For Her Love” which evokes Sting’s trademark “Fields of Gold” period. Here’s the aforementioned Rushing Water, first released on September 30 as the album’s second upfront single. “The song ‘Rushing Water’ is a fitting start to an album that seeks to bridge all of the petty differences that can separate us,” Sting noted in a separate announcement. The tune was co-written by him, Martin Kierszenbaum and Gavin Brown. It’s an upbeat pop tune with a guitar sound that in part appears to be sampled from Every Breath You Take.

After 14 years, Robert Plant and Alison Krauss have come together for another album, Raise the Roof. It marks the second collaboration between the British ex-Led Zeppelin lead vocalist and the American bluegrass and country singer following Raising Sand from October 2007. Like the predecessor, Raise the Roof was produced by T Bone Burnett. Fellow blogger Music Enthusiast featured one of the upfront tunes, Can’t Let Go, in a recent new music revue. Here’s another track: Searching For My Love. Like all except one song, it’s a cover, in this case of a tune written by Robert Moore and first released by soul group Bobby Moore & The Rhythm Aces in 1966. Plant and Krauss sound great together on this nice soul tune.