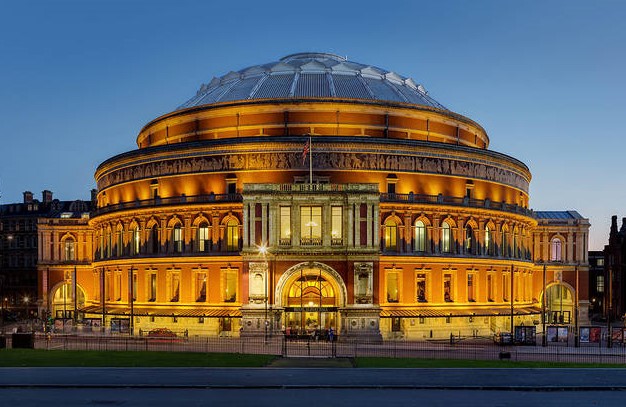 The first reference to the Royal Albert Hall I recall was in A Day in the Life, the magnificent final track of my favorite Beatles album Sgt. Pepper’s Lonely Hearts Club Band. Though at the time I didn’t realize the line Now they know how many holes it takes to fill the Albert Hall referred to the famous U.K. performance venue in London’s South Kensington district. The Royal Albert Hall, which had received a copy of the album prior to its release, did and was less than pleased.

According to this item in the concert hall’s archive, the Hall’s then-chief executive Ernest O’Follipar wrote a letter to Brian Epstein, maintaining the “wrong-headed assumption that there are four thousand holes in our auditorium” threatened to destroy the venue’s business overnight. Not only were the lyrics not changed, but John Lennon wrote back to the Hall, refusing to apologize. The venue retaliated with banning the song from ever being performed there.

The history of the Hall, which initially was supposed to be named Central Hall of Arts and Sciences, began long before The Beatles. In fact, it dates back to the 1900s and Queen Victoria. It was her majesty who in memory of her husband Prince Albert decided to change the name to the Royal Albert Hall of Arts and Sciences when the building’s foundation stone was laid in 1867. I suppose this makes her a pretty nice girl, though she actually did have a lot to say!

It was also Queen Victoria who opened the Hall in 1871. The building was designed by Captain Francis Fowke and Major-General Henry Y. D. Scott, who were civil engineers of the Royal Engineers. The facility, which today can seat close to 5,300 people, was built by Lucas Brothers, a leading British building construction firm at the time. The design was strongly influenced by ancient amphitheatres, as well as the ideas of German architect Gottfried Semper and his work at the South Kensington Museum.

The Royal Albert Hall has seen performances by world-leading artists from many genres. Since 1941, it has been the main venue for the so-called Proms, an eight-week summer season of daily orchestral classical music concerts. The venue hosts more than 390 shows in its main auditorium each year, including classical concerts, ballet, opera, film screenings with live orchestral accompaniment, sports, awards ceremonies, school and community events, charity performances and banquets and, of course, rock and pop concerts.

Let’s get to some music. As oftentimes is the case, it’s tough to find historical concert footage from the ’60s and ’70s, especially when it’s tied to a specific venue. One great clip I came across is this Led Zeppelin performance of Whole Lotta Love from a 1970 gig. Credited to all four members of the band plus Willie Dixon (following a 1985 lawsuit!), the tune was first recorded for the band’s second studio album ingeniously titled Led Zeppelin II, released in October 1969.

Since 2000, Roger Daltrey has been a patron for the Teenage Cancer Trust and raised funds for the group through concerts. The first such show was a big event at the Royal Albert Hall on November 27, 2000. In addition to The Who, it featured Noel Gallagher, Bryan Adams, Paul Weller, Eddie Vedder, Nigel Kennedy and Kelly Jones. The choice of venue was somewhat remarkable, given The Who in 1972 became one of the first bands to be impacted by the Hall’s then instituted ban on rock and pop. Here’s the Pete Townshend penned Bargain, which first appeared on The Who’s fifth studio album Who’s Next that came out in August 1971.

In early May 2005, Cream conducted four amazing reunion shows at the Hall, which were captured and subsequently published in different formats. Here’s White Room, co-written by Jack Bruce with lyrics by poet Pete Brown, and originally recorded for Cream’s third album Wheels of Fire from August 1968. Gosh, they just sounded as great as ever!

The last clip is from the above mentioned show by David Gilmour from May 29, 2006, during which he invited David Bowie on stage. As the Evening Standard noted, not only was it Bowie’s first and only appearance at the Hall, but it also was his last ever public performance. Gilmour and Bowie did Arnold Layne and Comfortably Numb together. Here’s their epic performance of the latter, which was co-written by Gilmour and Roger Waters for Pink Floyd’s eleventh studio album The Wall from November 1979. Interestingly, just like The Who, Pink Floyd was barred from performing at the Hall following their June 1969 gig there. It was the first nail in the coffin for rock and pop concerts at the venue that led to a complete, yet short-lived ban in 1972 because of “hysterical behaviour of a large audience often encouraged by unthinking performers.”