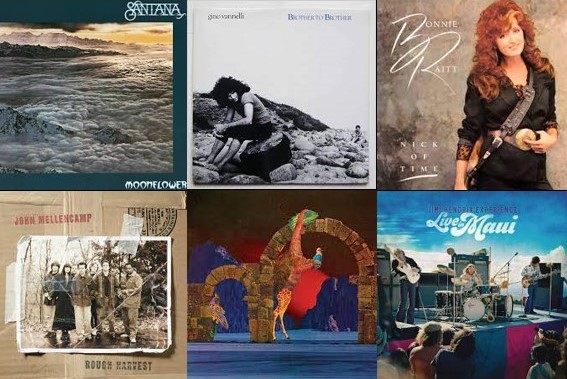 Hope everybody is enjoying their weekend. It’s another Sunday, which means it’s time again for what has become my favorite recurring feature of the blog. The Sunday Six is where I feel I can stretch out, featuring all types of music from different decades. This new installment illustrates my point. It includes genres like instrumental pop, jazz pop, roots rock, country rock and blues rock, and touches on the ’60s, ’70s, ’80s, ’90s and 2010s. Are you ready to embark on a little music journey?

Let’s get in the mood with a beautiful instrumental by Carlos Santana. He may not be the most sophisticated guitarist from a strictly technical standpoint, but his tone is just unbelievable. I know of no other guitarist who sounds like Santana, and that’s what ultimately matters, not whether you’re a fretboard acrobat. While I generally most love his classic period that spans his first three albums, the tune I picked for this post, Europa (Earth’s Cry Heaven’s Smile), is from Moonflower released in October 1977. The double album features both studio and live tracks. She’s Not There, a nice cover of a song originally recorded by The Zombies in the mid-’60s, became a top 30 hit single for Santana. Europa, co-written by Carlos Santana and Tom Coster, first appeared on the March 1976 studio record Amigos. I’m more familiar with Moonflower, so I’m going with the live version here. Listen to this majestic guitar sound – so good!

I don’t recall seeing any posts by my fellow bloggers about Gino Vannelli. While the Canadian singer-songwriter has been around as a recording artist since 1973, I suspect he may not necessarily be a household name. That being said, I assume most folks have heard some of his hits, such as the ballads I Just Wanna Stop (1978) and Living Inside Myself (1981), as well as the pop rock tunes Black Cars (1984) and Wild Horses (1987). Vannelli remains active to this day and has released 17 studio records, three live albums and one greatest hits compilation, according to Wikipedia. Brother to Brother is the amazing title track of his sixth studio album that came out in September 1978. While I Just Wanna Stop became the big hit off that album, the jazz-oriented Brother to Brother is far better. Written by Vannelli, the tune reaches the sophistication of Steely Dan’s Aja album, in my humble opinion. If you haven’t listened to this track before and like the Dan, check it out. You might be surprised!

Those who are familiar with my music taste may wonder what took me so long to feature Bonnie Raitt, one of favorite artists, in The Sunday Six. I don’t really have a good answer other than ‘better late than never!’ My long-time music buddy from Germany introduced me to Raitt in the late ’80s. I guess it must have been her 10th studio album Nick of Time, which to me remains a true gem to this day. While Raitt mostly relies on other songwriters, I love her renditions and her cool slide guitar playing. She also strikes me as no B.S., which is certainly not a very common quality in the oftentimes ego-driven music business. Nick of Time is perhaps best known for the single Thing Called Love, though according to Wikipedia, its chart success was moderate. The John Hiatt tune reached no. 86 on the UK Singles Chart and missed the mainstream chart in the U.S. altogether – though it did climb to no. 11 on Billboard’s Mainstream Rock chart. My pick from the album is Love Letter, written by another Bonnie, American singer-songwriter Bonnie Hayes. I simply love everything about this tune – the groove, the singing and Raitt’s sweet slide guitar sound.

John Mellencamp is another artist I’ve listened to for many years. If I recall it correctly, it was his eighth studio album Scarecrow released in August 1985 with tunes like Small Town and R.O.C.K. in the U.S.A. that started my long and ongoing journey exploring the music by the heartland and roots rocker from Seymour, Ind. Sure, I could have selected a track from that album. Or from the excellent successor The Lonesome Jubilee from August 1987, which remains among my all-time favorite Mellencamp records. Instead, I decided to highlight an album that isn’t as well known but still great, in my view: Rough Harvest. Released in August 1999 (that month appears to be a favorite for his records!), the album features a collection of alternate, roots-oriented versions of Mellencamp originals and covers. Under the Boardwalk, of course, falls into the latter category. The first version of the song I ever heard was the great rendition by The Rolling Stones. Co-written by Kenny Young and Arthur Resnick, it was first recorded by The Drifters in 1964 and became a no. 4 U.S. hit for the American doo-wop, R&B and soul vocal group. I think Mellencamp’s rootsy version takes the tune to a new level – just love it!

If you’ve followed my blog for some time, the name Cordovas may sound familiar; or perhaps you’ve heard otherwise of this Americana and country rock band from East Nashville, Tenn. They first entered my radar screen in the summer of 2018 when I caught them during a free concert in a park not far from my house. The group’s multi-part harmony singing proved to be an immediate attraction. So was their sound that reminds me of bands like Crosby, Stills, Nash & Young, The Band, Grateful Dead, Eagles and Little Feat. Led by bassist Joe Firstman, Cordovas have been around for more than 10 years. This Town’s a Drag is the opener of That Santa Fe Channel, the band’s third studio album from August 2018, which I previously reviewed here. Check out that beautiful warm sound!

I guess the time has come again to wrap up another Sunday Six installment. Let’s make it count with a smoking rocker by Jimi Hendrix who I trust needs no introduction. Voodoo Child (Slight Return) is the fiery closer of Electric Ladyland, the third and final album by the Jimi Hendrix Experience, released in October 1968. Like most other tracks on this double album, the tune was written by Hendrix. The clip is taken from Live in Maui, one of the many post-mortem releases from the Hendrix archives. It captures an outdoor performance by the Jimi Hendrix Experience on July 30, 1970 on the Hawaiian island, only six weeks prior to Jimi’s untimely death on September 18 that year. Unlike Electric Ladyland, the band’s line-up during the gig featured Billy Cox on bass instead of Noel Redding. Mitch Mitchell was on drums, just like on the studio album. The 2-CD and 3-LP set came out on November 20, 2020, along with a video documentary titled Music, Money, Madness … Jimi Hendrix in Maui. It has received mixed reviews due to less than ideal recording conditions. I still think it’s cool to actually watch Hendrix in action rather than just listening to his blistering performance.