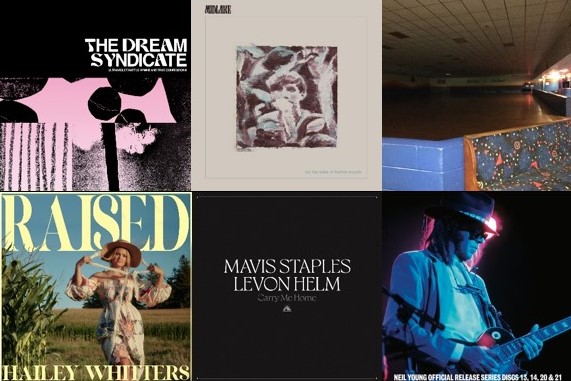 Another Saturday calls for another Best of What’s New. This latest installment of my weekly music revue is coming together at the last minute, and it’s got six instead of the usual four picks, so let’s get to it right away. Unless noted otherwise, all featured tunes were released yesterday (March 18).

Starting us off today are The Dream Syndicate, an alternative rock band from Los Angeles, founded in 1981. Their Apple Music profile calls them one of the most celebrated bands to come out of the Los Angeles “Paisley Underground” scene of the ’80s, adding, A hit on the college rock circuit, they never made it through to the mainstream. Until the group’s break-up in 1989, they released four studio albums. Since the band’s reunion in 2012, four additional albums have appeared, the first of which only came out in 2017. The Dream Syndicate’s current line-up includes original member Steve Wynn (lead vocals, guitar), along with Jason Victor (guitar, backing vocals), Mark Walton (bass) and Dennis Duck (drums). Where I’ll Stand, released on March 8 and written by Wynn, is the lead single of the band’s upcoming studio album Ultraviolet Battle Hymns and True Confessions, scheduled for June 10.

Midlake are a folk rock group from Denton, Texas, who have been around since 1999. According to their Apple Music profile, the band was formed by a group of musicians who had attended the North Texas School of Music. They were signed to Simon Raymonde’s Bella Union label in the U.K., leading to European concerts and their first full-length album, 2004’s Bamnan and Slivercork. For their next LP, Midlake changed gears and moved away from the psychedelic leanings of their debut toward a more ’70s-influenced sound. Released in 2006, The Trials of Van Occupanther was a critical success, resulting in bigger sales and an enhanced reputation for subsequent recordings like 2010’s The Courage of Others. A key lineup change followed in 2012 when frontman Tim Smith departed and long-time guitarist Eric Pulido stepped into his place on lead vocals. 2013’s Antiphon was their first record without Smith. Fast-forward to Midlake’s new album For the Sake of Bethel Woods, which appeared after an extended hiatus and is their first since the aforementioned Antiphon. Here’s Bethel Woods, credited to all of the band’s current members who in addition to Pulido include Jesse Chandler, Joey McClellan, McKenzie Smith and Eric Nichelson.

Oso Oso are a rock band from Long Beach, N.Y. around singer-songwriter and guitarist Jade Lilitri (Jonathan Dimitri), the group’s only permanent member. Here’s more from Apple Music: Originally Oso Oso was solely the work of Lilitri, who wrote and released an EP, 2014’s Osoosooso, and an album, 2015’s Real Stories of True People, Who Kind of Look Like Monsters…, through Soft Speak Records. Wanting to embark on more ambitious tours, Lilitri enlisted a full band to join him, including the addition of Aaron Wims on drums. Subsequently, the band took part in the recording of The Yunahon Mixtape in 2017 and sophomore full-length album Basking in the Glow in 2019, the latter of which saw release through Triple Crown Records. This brings me to Sore Thumb, Oso Oso’s fourth and latest album. Here’s Father Tracy, which like all other tunes was written or co-written by Dimitri.

Hailey Whitters is a country artist who originally hails from Shueyville, Iowa. Here’s more from her website: On her 2020 breakthrough album The Dream, the singer-songwriter wrote about escaping her hometown of Shueyville, Iowa, to pursue stardom in Nashville. It was a fantasy record at first, full of far-off plans, hopes, and dreams. But it soon became Hailey’s reality — she signed a label deal with Big Loud/Songs & Daughters, went on tour with Luke Combs and Midland, and made her first of many appearances on the Grand Ole Opry...In the midst of that whirlwind, Hailey found herself reconnecting with her Midwestern roots. Shueyville was always in the back of her mind and the memories she made there — getting her first kiss; partying in the cornfields; gathering for Sunday supper — started to shape her writing. Over the past two years, she channeled those memories into her new album, Raised. Following is the title track.

I trust R&B and gospel vocalist Mavis Staples, who initially became known in the 1950s as a member of gospel, soul and R&B family group The Staple Singers, doesn’t need much of an introduction. Fellow blogger Lisa from Tao Talk featured her the other day as part of her ongoing Women Music March 2022 series. As reported by Pitchfork, on March 15, Staples announced a forthcoming live album that was recorded in 2011 with Levon Helm, former drummer and vocalist of The Band. Captured at Helm’s studio in Woodstock, N.Y., Carry Me Home is among the final recordings by Helm who passed away from throat cancer in April 2012 at the age of 71. The announcement of the album, which is slated for May 20, coincided with the release of a great single, You Got to Move. Staples, now 82, remains active and has a busy touring schedule ahead of her throughout the entire year. What an amazing lady! And check out that great clip with Helm.

I leave you with another goodie by “an old hand.” Neil Young has announced a new box set titled Neil Young Official Release Series Discs 13, 14, 20 & 21. Continuing the chronological re-releasing of his official releases, remastered where analog tapes exist, the decade-spanning box set includes Hawks & Doves (1980), Re•ac•tor (1981), This Note’s for You (1988) and the Eldorado EP (1989),  a 5 track mini-album, previously only released on CD in Australia and Japan. The EP features two tracks not available on any other album and different versions of three songs that appeared on the Freedom album. Here’s one of the two tracks, Cocaine Eyes, a classic blistering grungy Neil Young rocker.

Following is a Spotify playlist of the above tunes and a few others sans Neil Young who recently pulled his music from the platform.